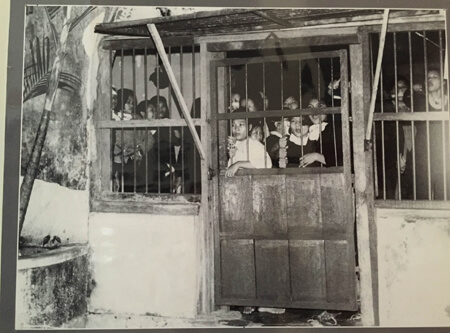 Con Dao is an archipelago approximately 150 sea miles from Saigon; therefore, if you are here, it is not by accident. Con Dao is marketed as a resort but it is much more than that. It reminds us somewhat of Cozumel, Mexico — also an island with a colonialist French past, but unlike Con Dao, accessible by mainland ferries every hour.

And unlike Cozumel, the streets of Con Dao are orderly and quiet — not filled with drunken foreigners being taken advantage of by the locals. In Con Dao, there are no hotel-sponsored drinking contests, no wet tee-shirt contests, no one hawking overpriced time shares, no one panhandling for “spare change.” Although the scenery and weather are very much the same, the feel of Con Dao is extremely different.

We had an uneventful flight from Saigon, about an hour over water. Descending onto Con Son Island, we encountered an unexpected crosswind that violently shook and tossed our turbo-prop aircraft. Locals believe there are supernatural forces in play on the island; as such, I sensed this as a positive acknowledgment of my assignment here. Below the mountains and jungle, there is a resort area popular with foreigners which is also utilized by Vietnamese but for seriously different reasons.

Apart from the stillness and natural calm, occasionally interrupted by singing birds or chickens, this island hosts monuments to the 21,000 Vietnamese who died or were executed by occupying French and American forces. It would be inappropriate to build a resort on Normandy because we, in the West, consider that to be hallowed ground. Why don’t those same standards apply here in Con Dao?

All of this, I firmly believe, is due to our ignorance of history. Monuments to “Communists” just seem unnatural for us. We fail to realize that the French executions of Vietnamese began in 1862, some 55 years before the first “Communist” appeared in the Soviet Union and even after that fact, it was much later for that philosophy to filter into these regions. So, we must understand that the French were executing Vietnamese because they were anti-colonial nationalists — or what we would now call political prisoners.

I firmly believe modern day Vietnamese want us to realize this on our own and are willing to allow some compromise that would give the foreigner the opportunity to make these logical deductions themselves. During their reign of terror, the French incarcerated only one female prisoner, Vo Thi Sau, who was 17 at the time of her arrest and 19 at the time of her execution. Vo Thi Sau is a national martyr and role model for all anti-colonial patriots. As she was being led to her execution, written records indicate she was loudly singing songs about flowers in bloom. Today “Biet on Vo Thi Sau” is a memorial song dedicated to her honor. She shared a common belief that suffering and blood sacrifices would one day purify the soil from foreign domination.

On the other side of the coin, I distinctly remember the female role model offered up to us during the time period when I was first in Vietnam. Tran Le Xuan, aka Madame Nhu or the “Dragon Lady,” de facto first lady of South Vietnam under President Ngo Dinh Diem, a wealthy aristocratic family that supported the French and Japanese occupations. Madame Nhu was a strong supporter of torture for political dissenters, and encouraged oppression of Buddhists because she believed they were “Communist.” She alleged that Western journalists who reported negative views regarding her regimes activities were “Communist sympathizers;” mocked the self-inflicted burning by monk Thich Quang Duc as a “barbequed monk” that “we need more of” and that she would personally “import more gasoline” to see this task accomplished.

Small wonder South Vietnamese Air Force pilots, Nguyen Van Cu and Pham Phu Quoc, would bomb the Presidential Palace in an attempt to kill her. These events were reported, during the time period, by historians James J. Sheehan and academic Wesley Fishel.  A. J. Langguth went further by indicating Madame Nhu was an “evil corrupting influence.” Defense Secretary McNamara, in his own writings, described the Dragon Lady as being “diabolical and scheming.” Amazingly, this was the government we continued to back even after Daniel Ellsberg released the Pentagon Papers, which indicated that the South Vietnamese government was “corrupt and oppressive” and “did not have” the “support of the people…” We first saw the tiger cages after the war.

Previously, I had been told they were an invention of “the Communists.” But since they were in use, by the French, prior to 1917, this is factually inaccurate. Tiger cage torture entailed some of the most twisted methods imaginable. They were employed to break the will and spirit of anti-colonial nationalists; but, what, in fact, they did do was strengthen the resolve of those that would finally got out, a list that would include: Le Duan, architect of the 1968 Tet Offensive; Pham Van Dong, a future Prime Minister; Le Duc Tho, who would lead the Vietnamese delegation at the Paris Peace Conference; and Ton Duc Thang, who became president after Ho Chi Minh’s death. Ton Duc Thang spent 16 years at Con Dao.

Western historical readings about these men are indeed sketchy and without foundation, seldom indicating references about any time they spent in French prisons or what affect that experience may have had. The French only had one female prisoner, Vo Thi Sau, and they executed her. After the Americans took over, dozens of women were victimized by the harsh conditions at Con Dao, which included the Tiger Cages. One female prisoner, while undergoing special torture in the tiger cage, lost all hope. She was able to secure a sharp object from the guard, which she then used to disembowel herself. Reaching inside the open wound, she removed some of her intestines and shoved them into her abusers face before she collapsed and died. Other women, pregnant at the time of incarceration, had their children at Con Dao. If they were not Communists when they arrived, they certainly were when they left. Former Vice President Madam Truong My Hoa was also a survivor of the American tiger cages. Their documented histories have never been shown in the West. We view this “mini-Holocaust” as an event that never happened. We have far too long ignored what we did here and misrepresented our involvement in Indochina.

Con Dao is an uncomfortable place we want to forget; but, we should not. Con Dao represents the worst and best humanity has to offer. Inside the cemetery is a large lotus pond frequented by snow white cranes. The trees, flowers, and shrubs give the appearance of a family park. The walkways are lined with benches and places to reflect. The mountains provide a stunning backdrop. Vibrations from the bell at the Buddhist temple create a serene atmosphere. Each grave site has a solar light whereas it can easily be seen at night. This is because worship/memorial services are on-going seven days a week and well into the evening. There are incense-burning towers as well as individual grave incense containers. There is a sound system that provide soothing music for the departn the ed souls.

There are a variety of monuments, totems, and a towering obelisk in Stanley Kubrick “2001” style,  with traditional Vietnamese markings and symbols; surprisingly, many look very Native American, Mayan, or Aztec.

Con Dao is a beautiful place with a tragic history. It also shows that good people will overcome the evil and violent actions of others. This is the overpowering feeling that radiates throughout this entire area connecting one receptive soul to another, no matter where they may be. For this reason alone, this place is well worth visiting.

James Rhodes  is a Vietnam War veteran  from Alabama who writes about Vietnam and contemporary politics.