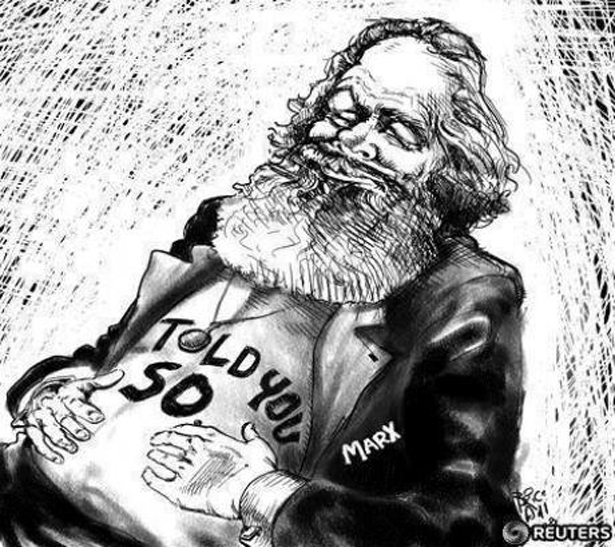 Exactly ten years ago this past April 7, I posted an article on Marxism-Leninism Today entitled Tabloid Political Economy: The Coming Depression (for those who missed it, it is reproduced below). It was my first and only attempt at economic prognostication, always a challenging and risky venture.

The “Tabloid” in the article’s title was a tongue-in-cheek reference to the headline in the April, 2007 issue of a now defunct supermarket tabloid, Weekly World News. Featured between Virgin Mary Slaps Boy and Jews Invented Pizzoh was the shrill admonition: Surviving the Next Great Depression! It’s Coming This Summer!

In fact, the Dow Jones Industrial Average continued to climb seemingly with no limit, reaching a new peak in the fall of 2007. The pundits continued to extol the virtues of unbridled capitalism.

While the folks at WWN built their case on scant evidence (“Skyrocketing gas prices, escalating war, crashing housing prices, calamitous weather and freefalling stock prices…”), there were many other good reasons to take their prediction seriously, reasons which I offered in my article. Unfortunately, the print edition did not survive to see the collapse that rocked the foundations of the global capitalist economy the following year.

Nonetheless, the zany supermarket tabloid proved to be far more prescient than the Nobel laureates, academics, and popular pundits who postured as learned economists yet never saw the collapse coming.

The global economy never fully recovered from the crash of 2008. Instead, it has stumbled along from one setback to another, with economic growth only marginally topping population growth. When both the enormous loss of wealth from the crash and the obscenely unequal distribution of the wealth recovered since the crash are configured, it is fair to say that the vast majority of the world’s population have seen little or no recovery. In fact, the casualties from the crash continue to pile up.

The US economy is neither healthy nor without serious symptoms. Despite the market euphoria that surprisingly accompanied the Trump election, the Atlanta Federal Reserve has lowered its growth expectations for the first quarter to .5% from an earlier forecast of 3%. Other projections have similarly dropped.

For three months in a row, since January, durable goods orders (excluding volatile transportation orders) have dropped. Industrial production fell .1% in January and was unchanged in February. Factory output dropped .4% in March from February and was only up .8% from a year earlier.

Sales of new cars— the principal driver of consumption growth since the crash— has fallen for three straight months. Auto dealers are now offering buyer incentives that are greater than the labor costs of production (labor costs are less than $2500 per car, on average). Incentives account for 10.5% of average sticker price ($31, 435). Yet the average car sits for over 70 days on the lot.

Used car prices were down 8% in February, another sign of declining demand. And auto loan defaults are on the rise.

The US trade gap— the difference between imports and exports— reached a 5-year high in February.

In stark human terms, the US economy is failing working people. Between January 2016 and January 2017, average hourly earnings slipped .1% and the hours of the average workweek dropped .3%. This calculates to a .4% loss in real average earnings for those twelve months.

With reduced earnings, more and more workers are drawing on their retirement savings: 20% of 401(k)s have been reduced through self-loans.

Not surprisingly, household debt in 2016 grew the most in a decade. Unlike in the lead-up to the crash, mortgage debt is growing modestly, still below the explosive growth rate of that time. Instead, the growth in debt is in credit cards, auto loans, and student loans. Auto loan debt has reached $1.2 trillion, while student debt has risen to $1.3 trillion.

Talking heads and media “experts” hail the job market. But they seldom delve deeply into its performance. Put simply, capitalists are hiring additional workers, rather than purchasing labor-saving equipment, because labor is cheap and flexible. The failure of organized labor to defend or advance labor’s relative position has served as a disincentive for capitalist investment in new technologies and equipment. They see no need to do so, when labor power can be used on demand, with no restrictions, and at low costs.

That trend is clearly reflected in the most recent period’s historically poor growth in productivity, among the lowest periods of productivity growth since the Second World War. Contrary to the widespread hawking of the idea that most workers are in danger of being replaced by robots, corporations are showing little interest in the introduction of new or old technologies. They are spending very little on equipment. While the technology may be there, capitalists have shown little need for it, given low labor costs.

As Shawn Sprague shows in a recent BLS paper, since 2009 the growth of aggregate hours-worked has grown more quickly than the growth of non-farm business output. This fact demonstrates that US capitalists feel little pressure to “save” labor while restoring profits during the so-called “recovery.” Rather than having existing workers work more hours, they are hiring more workers at low wages and contingently. Profits rebounded nicely because the working class had been slammed by the downturn, rendering the employment costs so low that there was no need to invest in labor-saving equipment.

This harsh truth has been ignored by economists and labor leaders alike because it shows the complete bankruptcy of class collaboration as an approach to social justice for workers.

US capitalists have enjoyed a decade of low labor costs, no pressure to invest retained earnings, and high profits (corporate after-tax profits dipped in 2015, but came back smartly in 2016). By securing labor power at low costs, they have foregone the purchase of labor-saving instruments and achieved modest growth by expanding employment.

Today, capital is profoundly afraid that, with reduced unemployment, competition for labor power will drive up the costs of labor and erode profits. The Trump tax change package, favorable to corporations and the repatriation of profits, is one ruling class response to this anticipated problem.

Despite the return of an overheated housing market with escalating prices (lagging new construction is fueling demand), no systemic accumulation crisis comparable to that of 2007-2008 appears on the immediate horizon. Instead, the post-collapse era of stagnation and deteriorating living standards continues for the working class.

As the shrinking income and mounting debt of working people erodes aggregate consumption, the possibility of a business cycle contraction grows more and more likely. The long, tepid expansion transferred nearly all its gains to the wealthy few, leaving little but debt or asset cannibalization for the majority. With declining retail sales, especially auto sales, and the growing weight of personal debt, the likelihood of further consumption growth is in doubt.

A business cycle contraction will only further weaken the position of working people, setting them up for a further dose of sacrifice and pain.

Isn’t it time to get off the capitalist roller coaster?