Speech of George Mavrikos, General Secretary of the World Federation of the Trade Unions (WFTU) to 101st International Labour Conference

Ladies and gentlemen,
This year, the annual conference of the ILO is taking place under conditions of deep crisis of the capitalist system. A deep crisis affecting all levels of all fields: the economy, the political, the cultural life, the environment.

The European Union is in deep crisis. Greece, Spain, Italy, Portugal, Ireland, Belgium etc. Now the crisis is reaching the core; it is knocking at the doors of France and sending messages to Germany itself.

In Libya, 120.000 people died because of the control of the wealth-producing resources.

In Syria, the emirs, the kings and the sultans of the Persian Gulf in line with the Turkish governments provide weapons for Syrians to kill each other.

The imperialists push South Sudan to establish new demands day after day. In Somalia, in Nigeria, in the Falkland Islands the situation is dangerous.

The slanders of USA and EU against Venezuela, against Cuba with the inhuman blockade, the situation in Pakistan, in Afghanistan; all these complete the picture of the imperialist interventions.

We, as workers, as the class-oriented trade union movement, as the World Federation of Trade Unions (WFTU), we have a duty to expose the plots of the exploiters and to edify the workers of the world with a militant spirit of struggles, of internationalism, of constant struggle against the imperialist wars.

The WFTU and its members and friends around the world have conducted important struggles during the last year. The center of these struggles was the struggle against unemployment. Unemployment is a social phenomenon, a product of capitalism. Unemployment affects everyone; mainly women and youth. The figures show that 75 million young people are looking for a job.

The ILO easily expresses wishes, generalities and vague promises. For long now, we have been listening to nice words for dignity, for equality, for democratic rights etc.

– Today, gentlemen of the International Labour Organisation, there are 200 imprisoned Palestinian young people in Israeli jails. What did you do for their freedom, for them to have a decent life and a future with decent job in their own state?
– Today, in Central America about 4.000 children are forced to participate in drug-trafficking gangs. How did you intervene?
– Only today, about 1500 children are going to die due to the lack of access to water and related diseases. Which were your interventions and what was their effect?
– In Greece the last two years more than 2,350 poor, pensioners, unemployed have committed suicide. How did the ILO denounce the Greek governments?
– Today in Greece 52% and in Spain 50,5% of the unemployed are young people. The WFTU sent a letter to the ILO to intervene against the dismissals of young people. You did not do anything about it.
– Thousands of young people are suffering from HIV/AIDS and they cannot obtain their medication. The life expectancy in Botswana has dropped 20 years, in Swaziland 16 years and 13 years in Lesotho and Zambia during the last decade.
– In Swaziland young people are being chased away from their country by the undemocratic regime while trade unionists and trade union organisations are being criminalized.
– In Kazakhstan strikers and trade unionists are murdered. In Malaysia trade unionists are being dismissed.
– In Colombia trade unionists are murdered everyday and the International Labour Organisation removed the government of Colombia from the Standards Committee list.
– In the mines of Chile and Peru workers are dying every day. What are the precautionary measures imposed by the ILO?
– The right of the workers to strike is under world-wide attack. The attacks against the workers in Helleniki Halivourgia who are on strike for 200 days and the workers in Unilever France who are on strike for 600 days prove this. In Panama, workers in the Panama Canal are prohibited from striking.

For us, the WFTU, the words dignity, equality and social justice are no generalities. They have concrete content. This is why the WFTU Regional Offices and the Trade Union Internationals (TUIsÂ) of WFTU develop action in all basic sectors, in all regions.

This is why on the 3rd October 2012, the WFTU has announced an International Action Day based on the slogan: ÂFood, clean water, books, medicines, housing for all the workers and the people.

We chose this content because we strongly believe that in the 21st century it is a crime that workers are dying out of hunger, thirst, that people leave in the streets, that millions of pupils have no books, that sick people have no access to medicines.

We consider a crime that the transnationals and the monopolies are plundering the wealth-producing resources of the countries and the people are left to suffer. This world is unfair, this world is undemocratic and we, as WFTU, will continue struggling until we change it and build a world without exploitation of man-by-man.

Some Lessons of the CIO 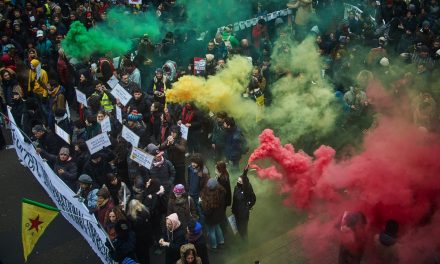