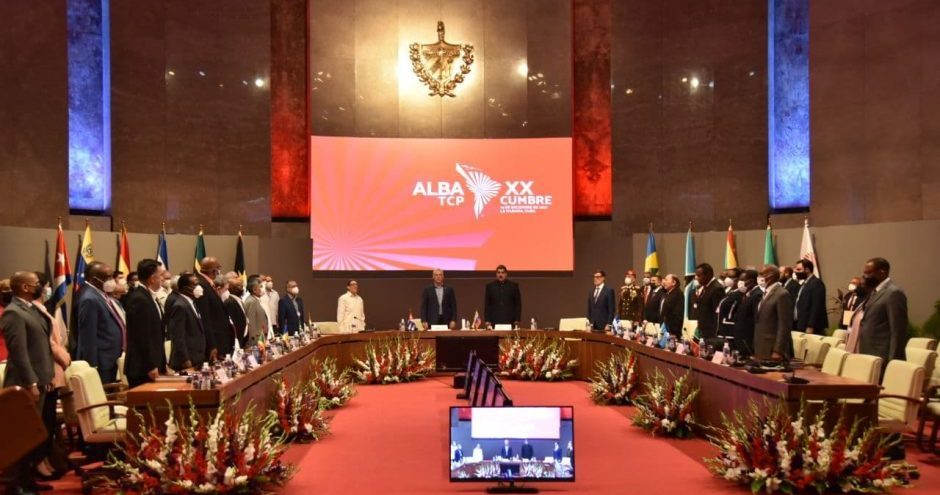 At the 20th Summit of the Bolivarian Alliance for the Peoples of Our America – Peoples’ Trade Treaty (ALBA-TCP), held in Havana, Cuba, on December 14th, the member countries of this bloc carried out a comprehensive evaluation of its 17 years of operation, in order to establish a multi-dimensional plan for common development.

In their final statement, the Heads of State and Government of Antigua and Barbuda, Bolivia, Cuba, Dominica, Grenada, Nicaragua, Saint Kitts and Nevis, Saint Vincent and the Grenadines, Saint Lucia and Venezuela, “ratify that the path towards integration must be guided by solidarity, social justice, cooperation and economic complementarity, in order to face together the imperial threats against the region.”

In the final document, they advocate for an international order “based on multilateralism, observance of the purposes and principles enshrined in the Charter of the United Nations and International Law,” and reject the imposition of unilateral
coercive measures [so called sanctions]. In this sense, they once again condemn the blockade against Cuba and Venezuela, as well as the attacks on Nicaragua and Bolivia.

In addition, they will continue to strengthen the Community of Latin American and Caribbean States (CELAC) as a space of integration and urgently called for the creation of a more comprehensive mechanism for debt relief for developing countries.

The House of Equals

The President of the Republic, Nicolás Maduro, proposed the creation of an economic plan to boost production in the region. He also considered it necessary to “advance more and better in  integration, in economic development and in the creation of wealth for the peoples.”

In that scenario, ALBA-TCP  “is the house of equals, of big dreams, our Commanders Hugo Chávez and Fidel Castro
were the ones who founded it and accelerated great projects for public education and health.”

For  his part, Cuban President Miguel Días-Canel, emphasized that the bloc constitutes an “authentic moral fortress of dignity,” which showed its strengths in the midst of the COVID-19 pandemic. “These expressions of alliance and support among all are

The Summit approved the ALBA-TCP 2022 Post Pandemic Plan, which stipulates strengthening ties with other integration bodies to promote the production and equitable distribution of vaccines, as well as consolidate economic plans, one of the areas most affected by the Coronavirus, explained the Executive Secretary of ALBA-TCP, Sacha Llorenti.

In the social sphere, it was agreed to link the ALBA-TCP social agenda with the United Nations 2030 agenda; to re-launch the social missions of the alliance and to create an observatory against interfering actions, to monitor these manoeuvres against the region.