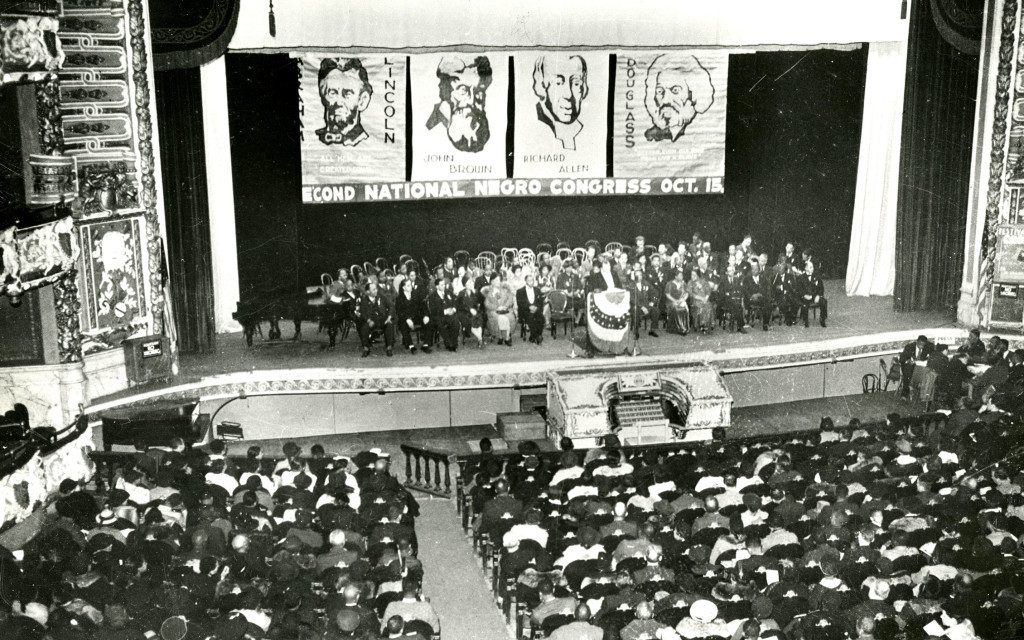 The National Negro Congress (NNC) and its affiliated organization the Southern Negro Youth Congress (SNYC) combined civil rights and labor struggles in a way that was unique during the time of their existence, 1936 to 1947, and which laid much of the groundwork for the more well known civil rights movement of the 1950s and 1960s. Many contemporary accounts of the later movement portray it as arising sui generis with no accounting of the former movement.

Erik Gellman’s recent book reminds us of the importance and efficacy of combining labor and civil rights struggles for the current era. Gellman, an associate professor of history at Roosevelt University, examines the work of the NNC and the SNYC in the Chicago steel and meatpacking industries in Chicago from 1936-39, the Virginia tobacco processing factories from 1937-40 in which the SYNC took a leading role, fighting Jim Crow in Washington DC, labor and civil rights struggles in New York City during World War II and finally their work in South Carolina immediately following World War II, particularly in conjunction with the CIO’s Operation Dixie.

While focusing on these Gellman also takes the reader through the internal debates and struggles of the NNC and SNYC and their relationships with the CIO, NAACP, and the CPUSA as well as individual unions and other local civil rights organizations. After a 1935 conference held at Howard University, a group of black activists agreed to call for a national congress to form a new organization to link labor and civil rights struggles. Among the personalities involved were A. Phillip Randolph of the Brotherhood of Sleeping Car Porters (BSCP), W.E.B. DuBois. Norman Thomas, James Ford, Emmet Dorsey, a Howard University professor and Howard Myers from the Roosevelt Administration. This congress took place in February 1936 with 750 delegates in attendance from 28 states.

Gellman describes the intent of the delegates in forming the NNC, “The NNC differed from previous civil rights groups because it confounded class and racial boundaries. The NNC, according to A. Phillip Randolph, would set, ‘a great precedent on the part Negro workers’ and ‘their sympathetic allies by ‘destroying all the poisonous seeds of jimcrowism’. Its leaders breached lines of middle-class respectability by persuading African American communities to embrace boycotts, strikes and marches. . .Its members anticipated that these tactics would foster new forms of community among African Americans. Then, from a position of power generated through unity, the NNC hoped to ally blacks with labor campaigns for economic justice.”

In Chicago the NNC at the urging of one its leaders, John P. Davis, with a mostly academic background decided to link forces with the Steel Workers Organizing Committee (SWOC) of the nascent CIO to organize black workers at their jobs and in their communities. The NNC knowing that 60% of the workers in steel were black, asked the SWOC for funds to organize in the south where the steel industry was also located. But the SWOC foreshadowing future relations with the NNC refused.

The NNC’s Chicago organizing demonstrated their methods of operation as they formed the Southside Tenants League with over 1,000 households affiliating to fight slumlords. They also campaigned for the Chicago Housing Authority to build units for African Americans. Their work bore fruit in 1940 with the completion of the Ida B. Wells Homes in the Bronzeville neighborhood. In 1939 NNC organizers formed the Southside Labor Council with representatives from ILGWU, the American Consolidated Trades Council, Federated Hotel Workers Union and the Transport Service Workers Union. “The council sought to cultivate pro-union sentiment and militant forms of activism as the means of economic emancipation. It held speakers’ series, issued press releases, organized a massive anti-lynching rally, and fought for public utility jobs.” When the SWOC’s autocratic leadership started to stymie NNC initiatives in steel, many activists began working in the Packinghouse Workers Organizing Committee with Henry “Hank” Johnson playing a leading role.

Initially the NNC fought discrimination in the AFL via the Brotherhood of Sleeping Car Porters (BPSC), but A. Phillip Randolph dropped out of the NNC in 1940 due to his opposition to the CPUSA, this no longer became a vehicle for NNC work in the AFL. The CIO was much more open to NNC work to fight discrimination and organize black workers in interracial locals. According to Gellman the NNC’s relationship with the CPUSA also became complicated at times due to a lack of communication from NNC Communists such as Ray Hansborough, Claude Lightfoot and Beatrice Shields with top African American leaders of the CPUSA. This came to the fore when the CPUSA shifted policy after the Soviet-German Non-Aggression Pact signed in 1939, as Communist cadre were told to reject the Roosevelt’s administration’s foreign policy and fight against bringing the US into an “imperialist war”, causing problems for NNC Communist activists with allies more aligned with the Roosevelt  Administration.

Gellman goes on to highlight the SNYC’s path breaking work in Richmond Virginia to organize tobacco workers and break gender and racial discrimination in that industry. Edward P. Strong was one of the leaders of that partially successful campaign. On the community and labor level the NNC did much work in New York City with female leaders such as Thelma Dale playing a leading role in winning jobs in war related industries, supporting Adam Clayton Powell in winning a seat in the US House of Representatives and conducting anti-lynching campaigns.

At the end of World War II the SNYC answered a challenge from W.E.B. DuBois given at the SNYC’s Congress held in 1946 in Columbia SC, at which he said the working class whites and African Americans had built this “glorious land” and “it would be shame and cowardice to surrender. . .its opportunities for civilization and humanity to the thugs and lynchers.” He told the assembled that, “The future of the American Negro is in the South.” The SNYC took up his challenge and rejected traditional lobbying tactics of established civil rights organizations instead engaged in voter registration, worker organizing and strikes. Modjeska Simkins, John McCray and Osceola McKaine were key leaders for the SNYC in South Carolina. In an effort to fight Jim Crow in the Democratic Party, much like Fannie Lou Hammer and others did two decades later, they formed the Progressive Democratic Party. And unlike traditional civil rights groups they brought an international perspective to their work, fostered by Communists in the SNYC. “Exposure to the CP’s international perspective benefited these SNYC activists by offering them a cogent analysis of race in a global context. It enabled them to understand their particular predicament in the U.S.
South by comparing it to other contexts of class and color exploitation. Most of them had never traveled abroad, and the CP’s foreign policy allowed them to imagine the Soviet Union as an alternative to American capitalism.”

But the anti-communist policies and repression of the US ruling classes against the CPUSA and other left organizations took its toll on the NNC and the SNYC in the postwar years. As other organizations such as the CIO buckled under this pressure both organizations began having difficulty working with allies with whom they once they had worked closely. By 1949 both organizations had ceased functioning.

Yet both left a legacy that is seldom mentioned today. Angela Davis remarked on this legacy, “My mother was a member of the Southern Negro Youth Congress, so I think of racial identification not primarily in terms of color of one’s skin. . .but according to what one does.” She believed that the activism of her mother’s generation “did not become part of American history because it does not tell a ‘triumphant narrative” but rather one that ‘point[s] to unfinished agendas of freedom.’

Gellman has written a valuable history of the NNC for today’s activists because it shows how success can be achieved by struggles to rid the US of racism and liberate its working class from the yoke of capitalism when they are waged together. Unlike many historians he does not engage in red-baiting and blaming the NNC’s and SNYC’s failures on their alliance with the CPUSA, but rather sees it as a key factor in their strategic and practical development. The author himself writes, “Yet scholars often treat the influence of the CP with a moral condemnation seldom seen in studies of other political parties. Activists understood the situation in more complex terms. . .This book has neither dismissed nor celebrated the Communist influence on the NNC but instead has allowed these contradictions to play themselves out in the historical record. In doing so it takes seriously Jacqueline Hall’s call to make civil rights ‘harder to celebrate as a natural progression of American values.’ The NNC’s work was always fraught with contradictions, and its activist campaigns more often plodded along than caused immediate reform. This approach to the NNC neither condemns it as ‘Communist front’ of duplicitous people nor lionizes it as an unambiguous righteous network of activists.”

Certainly with this book the NNC’s role in popular struggle will not be forgotten and should be studied given the many problems currently impeding the growth of a militant class-oriented labor movement and the distractions of identity politics that muddle the thinking and work of many on the US left today.