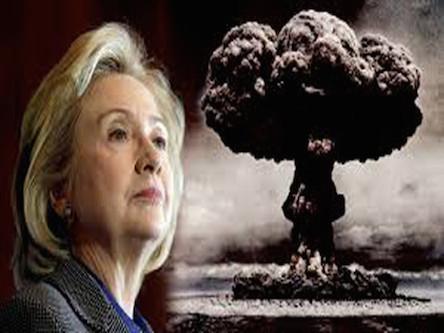 With Donald Trump’s bid for the White House disintegrating by the second, there is no longer even the flimsiest excuse for those who purport to be “progressives” to withhold their vote from the one party on the ballot that opposes imperial wars, the rule of the rich, and the domestic mass Black incarceration regime: the Green Party.

The alternative is a very short countdown to global war with Russia and, inevitably, China, and the possible extinction of the species. The overarching issue in the impending election is not the composition of a future U.S. Supreme Court, but whether humanity will be allowed to have a future.

Hillary Clinton cannot be stopped, but she can at least be denied a sweeping mandate to plunge the planet into a new dark age – a catastrophe that is only one U.S. airstrike away, in Syria.

The U.S. is poised to put its planes and missiles at the service of al-Qaida, the main jihadist army occupying the eastern neighborhoods of Aleppo. Although the Clinton campaign and most of the corporate media speak of a “siege of Aleppo” by Syrian government and Russian forces, all but 250,000 of the city’s more than 1.2 million residents live on the government-controlled side of the city, which has been shelled by jihadists entrenched in the eastern pockets for the past four years.

The campaign to liberate eastern Aleppo is primarily a battle against the former al-Nusra Front, the al-Qaida affiliate that recently changed its name and will doubtless do so again, along with various smaller, supporting jihadist outfits, some of which the U.S. insists are “moderate.”

Thus, Aleppo is the epicenter of the “war on terror” that the American and global public has been drafted into since 2001 — with the United States acting as defender of the very jihadists that are blamed for the 9/11 attacks.

What absolute madness! Once digested, the truth about the U.S. project in Syria would annihilate the legitimacy of the American ruling circles that have brought us this nightmare of depravity and betrayal, most of whom are now gathered in Hillary Clinton’s Big Tent, scheming on ways to kill some Russians.

The only forces that are actually battling al-Qaida are the Syrians and their allies, backed for the past year by the full strategic weight of Russia. Before the Russians brought their air force into play, the U.S. had hardly touched the main forces of ISIS, the al-Qaida offshoot, allowing the Islamic State’s tanker convoys to trade oil with Turkey under full view of overwhelming U.S. airpower.

Russia’s entrance into the Syrian conflict — which is a totally legal agreement between sovereign nations, whereas the U.S. and its allies are invading aggressors under international law — revealed to the world public Washington’s true role as the superpower protector of international Islamic jihad.

Most importantly, Russia’s engagement broke al-Qaida’s siege of Aleppo, which could have led to the collapse of the Syrian government and a jihadist takeover in Damascus. At that point, the U.S. and its European, Turkish and Persian Gulf Arab allies might have halted their financing and arming of al-Qaida and ISIS, and moved to occupy Syria, themselves – if they had a plan, at all. Most likely, Syria would have disintegrated into genocidal chaos, many times worse than Libya, the previous victim of America’s policy to deploy jihadists as foot soldiers of empire.

As punishment for saving Syria from being entirely overrun by western-backed jihadists and a bloodbath even greater than the half-million that have already died as a result of U.S. policy, the Russians now face direct attack from the United States. It could come any moment, and is highly likely if Clinton wins what she can claim is a resounding “mandate” in November.

The “no fly zone” that Clinton wants to impose over Syria would mean war with Russia from the very second it was implemented since, under U.S. military doctrine, it requires the immediate destruction of all “enemy” air defenses. That was a relatively easy assignment for NATO forces in Libya, in 2011, but Syrian airspace is now guarded by the world’s most sophisticated defense systems, manned by Russian operators, guarded by Russian Marines, and backed by Russia’s strategic nuclear forces. Will Washington risk nuclear war to protect al-Qaida? Isn’t it insane to have to ask such a question?

Of course, the U.S. is not rolling the dice on humanity’s future because of concern for the welfare of its jihadist proxies, whom it has nourished since birthing the international jihadist network in Afghanistan, in concert with Saudi Arabia, more than three decades ago.

Washington is quite prepared to incinerate its pet Salafists and “Takfiris” when convenient to its larger global aims. The jihadists are simply tools for the destruction of troublesome sovereign states in the drive for global U.S. domination. Their deployment has been a bipartisan project of the permanent War Party embedded in the duopoly system. Barack Obama turned to the jihadists to rebuild the U.S. capability for “power-projection” in the region after the disastrous failure of George Bush’s massive American “boots on the ground” gambit in Iraq.

Obama, with Secretary of State Clinton urging him on, began the renewed American offensive in the Arab world with his own “Shock and Awe” bombardment of Libya, providing air cover and arms for various Islamist factions, including al-Qaida. Five years later, Libya is a broken country.

Syria was a much harder target. In a super-heated cauldron of foreign arms and money, the various jihadist groups formed their own alliances. A split within the al-Qaida family produced ISIS, intent on establishing its own caliphate regardless of its benefactors’ political and battlefield priorities. If there ever were any armed “moderates” — i.e., non-jihadists — arrayed against the Assad government, they were militarily insignificant. It was a jihad war, backed by a super-power in alliance with al-Qaida.

By 2012, analysts at the Defense Intelligence Agency were alarmed that the United States and its allies seemed to be purposely creating the conditions for jihadists to establish a caliphate in parts of Syria and Iraq. A year later, ISIS — the “rogue” jihadist outfit — announced its presence in the region. It was already quite clear that the other al-Qaida army, al-Nusra, was the strongest “rebel” force in Syria.

So, when the Syrian government was blamed for a chemical weapons attack that killed hundreds near Damascus, in August of 2013, President Obama was forced to confront the consequences of his jihadist war. If he followed through on his threat to directly attack the Syrian military — an assault that would likely destroy the Syrian state — then there would be nothing to stop the two al-Qaidas from taking over the country.

Obama blinked. He called off the air attack, and took up Russia’s diplomacy for the peaceful destruction of Syria’s chemical weapons capability. For the next two years, Obama appeared to be content to keep the war going, grinding down the Syrian government and its allies, piling up the body count, but resisting pressures from the War Party to bomb the Assad government out of existence.

Then Russia entered the picture with all four feet last year, and upped the ante. Obama and others in his administration and within the U.S. military are clearly still resisting the demands of the Total War Party, now headquartered in Hillary Clinton’s Big Tent — despite the U.S. bombing raid that killed more than 80 Syrian soldiers on the front lines with ISIS, last month, an alleged “mistake” carried out by mutineers that brought the world much closer to all-out war.

Donald Trump never had more than an outside chance of winning the presidency. His opposition to “free trade” and “regime change” — NOT his overt racism — ensured that U.S. imperial ruling circles would unite behind Hillary Clinton, giving her an insurmountable advantage in money and media.

The Trump campaign is in its death throes, and Hillary cannot be stopped. But she can be slowed down in her rush to war. Those “progressives” that were resigned to cast their vote for Hillary out of fear of Trump have no reason to tremble at the prospect of an orange presidency. Rather, they should be terrified of Hillary Clinton getting the kind of landslide that she will interpret as a mandate for war with Russia – a war in defense of al-Qaida in Syria.

According to the New York Times, Clinton likes to tell crowds, “I am the last thing standing between you and the Apocalypse.” But, in truth, she represents the greatest threat of apocalypse in the world today.

Vote Green, wherever you live, if you want to keep on living.

The Political Economy of the Elections 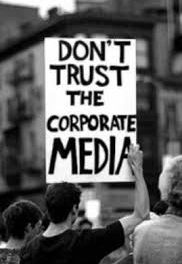 ‘Corporate Media Are Not Observers of the Electoral Process; They Are Participants’