Speech at the International Meeting of Communist and Workers’ Parties in Athens.

It is for the WFTU an important opportunity to greet the leaders of the Communist parties at a time when our trade union organization, during the last six years, is following a steady upward path, a path of strengthening its internationalist and class characteristics. In the last six years we succeeded in affiliating important trade unions to the WFTU adding 16 million new members; today our organized strength has 82 million members in 120 countries.

In the six years we have built four new international sectoral trade organizations, in branches with strategic importance and we strengthened the voice of the WFTU in the four international organizations where we participate with permanent representatives in the UN in New York, in the International Labour Organization in Geneva, in FAO in Rome and in the UNESCO in Paris.

The result of this positive six-year course was the holding of the 16th World Trade Union Congress held in April 2011 in Athens with the participation of 828 representatives from 101 countries. It was a militant, democratic, open Congress, a Congress where important resolutions were taken, on the positions of the International class trade union movement in the contemporary needs of the working class and all popular strata.

Allow us to address a call on the parties which have not yet in their attention the support for the WFTU and we ask them to discuss and to positively examine this so that we have their practical, concrete help aiming to accelerate and strengthen the path of reconstruction with the affiliation of new members from their countries and the development of actions and concrete initiatives in their countries, as well.

We believe that today the attitude in relation to the WFTU is a basic criterion for all of us, at all levels. It is not proper that someone remains neutral, independent or indifferent.

Everyone knows that in the international trade union scene today there are two trade union organizations. On one side is the WFTU with as its basic principles the line of class struggle, of proletarian internationalism, of the unity of the WorldÂs working class on a class basis, of the struggle for the elimination of the system of exploitation.

On the other side it is the ITUC that even today supported the imperialist invasion at the expense of Libya, is a partner of the IMF and of the WorldÂs Bank, is slandering Cuba, Venezuela and supports the policy of Israeli governments. This is the reality. So how can it be justified that some, few, very few, remain neutral, independent or indifferent.

We are comrades and the WFTU needs us all, with our positions, our criticism, our particular characteristics but carrying the same flag, the flag of class struggle against capital and Imperialism. This is the reason for which we believe that today the criterion of the position of us in relation to the WFTU is important. We are talking about a position with concrete actions, with activities and initiatives. Let us all follow the positive example of the vast majority of the Parties all over the world.

To understand also through the daily struggles that it is the class that acquiring and building its unity, its own unity, it can lead of its poor peasants, of the self-employed, of the progressive intelligentsia in the struggle for its liberation. Especially today when the contemporary working class is more experienced, more educated, it has greater needs and therefore is more capable.

Twenty days ago, in mid November, we were in Peru in a very strong congress of CGTP and we held in Lima a successful international seminar on the crisis of the capitalist system and we thank both Communist Parties in Peru for the serious help they provided us.

Five days ago, in South Africa, also with the help of the South Africa Communist Party, three major sectoral federations, NUMSA of metal, NEHAWU of Public Employees and CEPPWAWU of Chemical Industry, all the three are affiliates of the WFTU, organized two international trade union meetings.

We believe that the Marxist theory has answered these phenomena in a timely way which certainly are not new ones. Our theory supports that only the working class in its struggle for socialism can provide answers and fight for the solution of environmental and ecological problems, etc. It will be a serious mistake for the class trade unions to run behind the NGOs.

To achieve better results in the organization of the struggle we need ideological, political and organizational direction capable of helping the working class to acquire everyday in life, in practice, in struggles, this avant-garde. We believe that in this goal it can assist the WFTU, its affiliates and friends, if we are stable in educating workers to link their struggles for the daily wage, for salaries, for trade union rights, for free and public health and education, for health and safety measures in workplaces with a struggle for the overthrow of capitalist exploitation.

This struggle needs to take place at the same time, in parallel and complementing each other. The experience of the labor movement teaches that it is a main task of class trade unions to politicize the struggles, to give every time radical political features to demands so that the consciousness of the working classÂ  rises, the necessity of the organization and of the organized struggle is understood. So with the organization and radicalization of the struggle, the struggle will be more mass and more effective.

With these thoughts, dear comrades, allow me to ask again on behalf of the WFTU, the continuous practical help from all of you; we need your suggestions, your comments and certainly your criticism.

So we move forward. We from our side, as the leadership of the WFTU, we will continue as fighters in the workplaces, in all sectors, in every corner of the earth, to give our common struggle against capitalist barbarism for the social liberation of the working class.Â 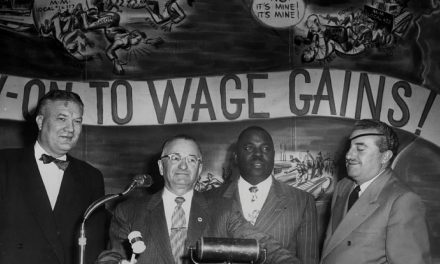