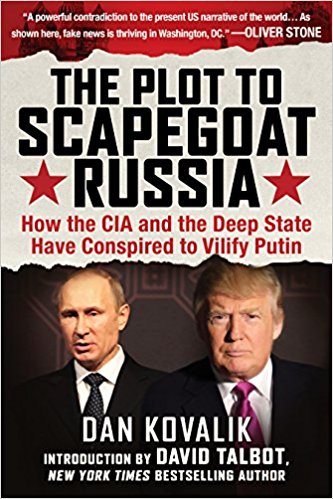 Lawyer and human rights activist Dan Kovalik has written a valuable book. He looked at a recent U. S. political development in terms of history and then skewered it. His new book, “The Plot to Scapegoat Russia,” looks at mounting assaults against Russia that increased  during the Obama administration and that spokespersons for the Democratic Party, among others, are promoting.

The CIA, he claims, without going into specifics, is engaged in anti-Russian activities. For Kovalik, “the CIA is a nefarious, criminal organization which often misleads the Ameri­can public and government into wars and misadventures.”

Kovalik devotes much of his book to what he regards as precedents for the current dark turn in U.S. – Russian relations. Toward that end, he surveys the history of U.S. foreign interventions since World War II. He confirms that the United States government is indeed habituated to aggressive adventurism abroad. That’s something many readers already know, but Kovalik contributes significantly by establishing that U.S. hostility against Russia ranks as a chapter in that long story.

But what’s the motivation for military assaults and destabilizing projects? And, generally, why all the wars? The author’s historical survey provides answers. He finds that the scenarios he describes are connected. Treating them as a whole, he gives them weight and thus provides an intellectual weapon for the anti-imperialist cause. Kovalik, putting history to work, moves from the issue of U.S.-Russian antagonism to the more over-arching problem of threats to human survival. That’s his major contribution.

His highly-recommended book offers facts and analyses so encompassing as to belie its small size. The writing is clear, evocative, and eminently readable; his narrative is that of a story – teller. Along the way, as a side benefit, Kovalik recalls the causes and outrage that fired up activists who were his contemporaries.

He testifies to a new Cold War. Doing so, he argues that the anti-communist rational for the earlier Cold War was a cover for something else, a pretext. In his words: “the Cold War, at least from the vantage point of the US, had little to do with fighting ‘Communism,’ and more to do with making the world safe for corporate plunder.” Once more Russia is an enemy of the United  States, but now it’s a capitalist country.

That’s mysterious; explanation is in order. Readers, however, may be hungry to know about the “plot” advertised in the book’s title. We recommend patience. History and its recurring patterns come first for this author. They enable him to account for U. S. – Russian relations that are contradictory and, most importantly, for the U.S. propensity for war-making. After that he tells about a plot.

Kovalik describes how, very early, reports of CIA machinations from former agents of the spy organization expanded his political awareness, as did a trip to Nicaragua. There he gained first-hand knowledge of CIA atrocities, of deaths and destruction at the hands of the Contras, anti- Sandinista paramilitaries backed by the CIA. His book goes on fully and dramatically to describe murders and chaos orchestrated by the United States and/or the CIA in El Salvador, Colombia, and in the South America of Operation Condor. Kovalik discusses the U.S. war in Vietnam, occupation and war in Korea, nuclear bombs dropped on Japan, nuclear testing and dying in the Marshall Islands, and the CIA’s recruitment of the anti-Soviet Mujahedeen in Afghan­istan. He recounts U. S. – instigated coups in Iran, 1953; Guatemala, 1954; and Chile, 1973.

These projects were about keeping “the world safe from the threat of Soviet totalitarianism” – in other words, anti-communism. But then the USSR disappeared, and the search was on for a new pretext. The Clinton administration evoked “humanitarian intervention,” and continued the intrusions: in Ruanda, Democratic Republic of the Congo (on behalf of “US mining interests”), Yugoslavia, and Libya.

In Kovalik’s telling, the U. S. government eventually settled upon the notion of “American exceptionalism,” that is to say, “the belief that the US is a uniquely benign actor in the world, spreading peace and democracy.” Thus armed, the U. S. military exported terror to Afghanistan, Iraq, Somalia, Yemen (via its Saudi Arabian proxy), and Honduras, through a U. S. facilitated military coup. The book catalogues other episodes, other places. Along the way on his excursion, Kovalik contrasts U. S. pretensions and brutal deeds with the relatively benign nature of alleged Russian outrages.

Good relations with Russia, he says, would be “simply bad for business, in particular the business of war which so profoundly undergirds the US economy … As of 2015, the US had at least 800 military bases in over 70 nations, while Britain, France and Russia had only 30 military bases combined.” And, “under Obama alone, the US had Special Forces deployed in about 138 countries.” Further, “The US’s outsized military exists not only to ensure the US’s quite unjust share of the world’s riches, but also to ensure that those riches are not shared with the poor huddled masses in this country.”

Kovalik highlights the disaster that overwhelmed Russia as a fledgling capitalist nation: life expectancy plummeted, the poverty rate was 75 percent, and investments fell by 80 percent. National pride was in the cellar, the more so after the United States backed away from Secretary of State Baker’s 1991 promise that NATO would never move east, after the United States attacked Russia’s ally Serbia, and after the United States, rejecting Russian priorities, attacked Iraq in 2003 and Libya in 2011.

The author rebuts U. S. claims that Russian democracy has failed and that Putin over-reached in Ukraine. He praises Putin’s attempts to cooperate with the United States in Syria. The United States has abused peoples the world over, he insists, and suffers from a “severe democracy deficit.”

By the time he is discussing current U. S. – Russian relations, readers have been primed never to expect U.S. imperialism to give Russia a break. The author’s instructional course has taken effect, or should have done so. If readers aren’t aware of what the U. S. government has been up to, the author is not to blame.

Kovalik condemns the  Obama administration and particularly Secretary of State Hilary Clinton for intensifying the U. S. campaign against Russia. He extends his critcism to the Democratic Party and the media. The theme of anti – Russian scheming by the CIA comes up briefly in the book  in connection with hacking attributed to Russia and with WikiLeaks revelations about the Democratic Party. Nothing is said about possible interaction between personnel of the Trump campaign and Russian officials.

Kovalik’s historical excursion took in the Soviet Union. Clearly, many of the U. S. military interventions described in this valuable book wouldn’t have occurred if the Soviet Union still existed. Beyond that, Kovalik says, “the Soviet Union, did wield sizable polit­ical and ideological influence in the world for some time, due to the appeal of its socialist message as well as its critical role in winning [World War] II.”

Kovalik acknowledges “periods of great repression.” He adds, however, that “the Russian Revolution and the USSR … delivered on many of their promises, and against great odds. …. In any case, the goals of the Russian Revolution—equality, worker control of the economy, universal health care and social security— were laudable ones.” And, “One of the reasons that the West continues to dance on the grave of the Soviet Union, and to emphasize the worst parts of that society and downplay its achievements, is to make sure that, as the world-wide economy worsens, and as the suffering of work­ing people around the world deepens, they don’t get any notions in their head to organize some new socialist revolution with such ideals.” 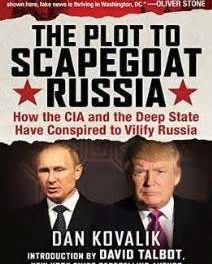