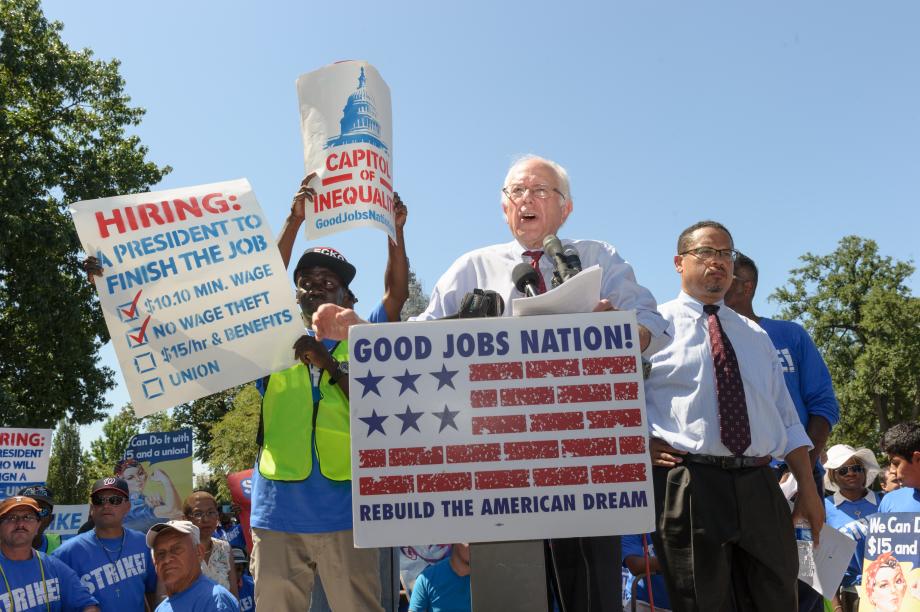 By Greg Godels and Joseph Jamison

The US left, with declining influence on events here and afar, is caught in a consuming debate over the Bernie Sanders campaign for the Democratic Party nomination for President.

Arrayed on the left of the left are the skeptics, some arguing, as Bruce Dixon did in Black Agenda Report, that Sanders is a “sheep dog” for the Democratic Party, a false candidate, a loyal Democrat running to rally the Party’s more left-leaning base into the Hillary/Biden corral.

Counterpunch has equally served as a base for those dissecting Sanders’ proclaimed leftism, exposing his shabby record on almost all foreign policy matters and his dogged economism: reducing nearly all justice issues to the question of economic inequality. He has become a kind of Piketty-candidate.

Arrayed elsewhere are those who see the Sanders campaign as of some value to the left, some importance to the cause of political independence, or, broadly speaking, a beacon of hope in an otherwise bleak political landscape.

Sanders supporters point to the rallies and opinion poll numbers as demonstrating a thirst for progressive politics that is latent in the general public. Indeed, they do. But the question remains: does Sanders intend to or will he be able to quench that thirst?

Excited by Jeremy Corbyn’s recent success in attaining the UK Labour Party leadership, many on the left see a parallel with the Sanders campaign. Nothing could be more misleading.

Corbyn is a man of the left, a leader who came from left movements, led left movements, and relies on the support of left movements. He thanked his backers for their help in a column he regularly writes for the UK Morning Star, a paper supported by the working class and friendly to Marxists. His close associates have deep roots in the left, the labor movement, and the anti-imperialist movements.

Bernie Sanders has been a career politician for over 40 years. He has not used his considerable influence to encourage independent non-electoral actions.

Corbyn is engaged in an intense struggle for the future of his party. The right wing of the Labour Party is now on the defensive. Corbyn eagerly faces a battle to establish a labor-based, anti-imperialist agenda in a party that formerly rivaled the Conservative Party in its embrace of neo-liberalism, imperial aggression, and corporate coddling. While he has not won a general election, he is in a position to radically change the direction of the Labour Party going forward. Barring a party coup, he has years to build on his victory.

Sanders has no opportunity to change the course of the Democratic Party. Hillary Clinton has garnered a huge list of endorsements from the party’s elected officials; Sanders has enjoyed only a handful of endorsements from minor officials. Clearly, there is no rebellion boiling within the corporate-dominated Democratic Party. Further, Sanders has pledged to endorse and support the nominee after the primary elections. He will not lead an insurgency within or outside of the party. Whatever Sanders accomplishes in the primary will dissolve afterward. The morning after Super Tuesday 2016, or thereabouts, Sanders supporters are almost certain to scratch their heads and wonder what exactly they got in return for all their toils.

For those looking for a guide in the debate, Marxist theory demonstrates the patterns of bourgeois governance and the historically evolved institutions designed to preserve ruling class power. Marxist Victor Perlo summarizes the theory simply, but accurately:

In the United States, elective offices are divided between representatives of two capitalist parties, Republican and Democratic. There are differences in the identity of the main groups that usually support Republicans and those that mainly support Democrats, but these differences are not essential on the main questions. The majority of the most powerful magnates prefer to support the Republicans, who are the most reactionary in domestic policy, but enough of them will shift to the Democrats when such a shift is considered desirable. Frequent shifts between the two parties are necessary because the policies and actions of the administrations– of whichever party– bring about mass disillusionment among the voters, who had been deluded by demagogic promises of campaigners. (Super Profits and Crisis: Modern US Capitalism, 1988, pp. 258-259)

Where, we should ask, does Bernie Sanders fit into this characterization of the two-party system? Is his campaign different from earlier campaigns, earlier Democratic “insurgencies” that served as a safety valve for mass dissatisfaction? Doesn’t Perlo’s account explain the ruling class shift to Obama (demonstrated by the flow of corporate campaign contributions)? Wasn’t mass dissatisfaction with Bush defused by Obama-mania? As the Perlo quote implies, the glue holding together this brilliant edifice for bourgeois rule is the two-party system (and the lack of a working class party). Does Sanders challenge this edifice?

He might challenge it, if he had not conceded beforehand that he would not run as an independent and, therefore, not challenge it.

Writing in the same year (1988), a group of Soviet social scientists collectively offered the following appraisal of the US two-party system:

First, the Soviet analysts reject the idea that the US two-party system is unique. They view this system as one of the models of capitalist society’s political structure…

The most important [difference] is that no other party, except a bourgeois one, has managed to fit into the system… As we see it, the basic mission of that institution consists in protecting bourgeois social relations and not abstract national interests…

The continual transformation of the consensus-alternative elements in party stands serves as the most important means for the two-party institution to oppose the movement for independent political action.

Thus, the two-party system quite firmly neutralizes popular attempts to break free of the ruling class’ political control. No wonder Lenin called it “one of the most powerful means of preventing the rise of an independent working-class, i.e., genuinely socialist, party.” …[M]uch of the credit in the fight against the movements for independent action goes to the Democratic Party which, since the late 19th century, has performed immense services for the US Establishment by integrating within its structure social forces seeking to break free of the control of the two-party tandem…

Thus, it has been stated that the consensus-alternative principle [“Without consensus, the two-party system would be unable to effectively defend the common interests of the ruling class. Without offering an alternative the parties would completely lose their individual character” A.A. Mishin] opens up wide scope for maneuver by the components of the two-party system in order to hold class contradictions in check and helps them retain their dominating position in the political process. (From the preface and introduction to The US Two-Party System: Past and Present)

In our opinion, little has changed in the two-party system since the Soviet scholars made this assessment. The recent history of Howard Dean’s Deaniac movement and the Obama “hope and change” movement surely fit squarely into the Soviet analysis: both were successful in “integrating within [the Democratic Party] structure social forces seeking to break free of the control of the two-party tandem [system].” Both were successful in dissipating voter disillusionment. Sanders fits the same mold.

Some may see the Marxist position as fatalistic, shutting every avenue to change through electoral politics.

That would be a misunderstanding.

The Marxist position points to two tasks essential for escaping the two-party trap: establishing a political movement of independence– independent of the two parties — and building a working class-based party. Neither result will spring forth fully formed. Working on one or both projects is a thankless, difficult commitment — far more difficult than jumping on a Democratic Party bandwagon for a couple of months every four years.

Absent from most discussions about political independence is a sense of crisis. The Left, above all, should reason historically and recognize that, given the recent blows to US democracy, time is not on our side. Accepting the bourgeois election cycle  — and going with a corporate Democrat one more time — carries an unseen cost. It is to postpone work on the historical task of breaking up Big Business’ two-party system. The corporate grip on electoral politics will be tighter in 2018 and 2020 and beyond. The full, obscene consequences of the “Citizens United” decision and the “superpacs” are still to be felt. Billions of corporate Dark Money dollars will flow into the 2016 campaigns. Union density drifts lower and lower. We must act with urgency to build political independence.

Activists for progressive change have alternatives to Sanders. They can plant seeds for the future by participating in existing third-party movements — Greens, Peace and Freedom Party, etc.– and supporting working class candidates where they find them. There may even be independent-minded Democrats deserving of encouragement, showing promise of escaping the two-party quicksand.

While Sanders poses no threat to the “alternative-consensus” logic, his candidacy does afford trade unionists an opportunity to combat the unproductive political rigidity of the US labor movement leadership that has backed corporate Democrats. By supporting the Sanders candidacy, unionists can challenge the subservience of the leadership to the Democratic Party mainstream.

It would be opportunist — and dishonest — to turn a blind eye to Sanders’ limitations, but it would be sectarian, the opposite error, to ignore that he has excited the hopes of parts of the US progressive electorate — liberals, students, social democrats, and a few unions. That base is important to unions and to the Left. In the working-class movement, sectarianism is a policy or practice that isolates the Left from masses of people in struggle, as a result of ideological and political rigidity or dogmatism. The best elements in the Sanders campaign will be striving to push him to better positions now, and after the campaign, seeking to gather in the forces in his base who see the need for more advanced candidacies. If they take up that task, they can avoid the great mistake of 2009, waiting around for Obama to organize the independent forces that he set in motion to win in November 2008.

That fight is a fight worth having and a small step for political independence. 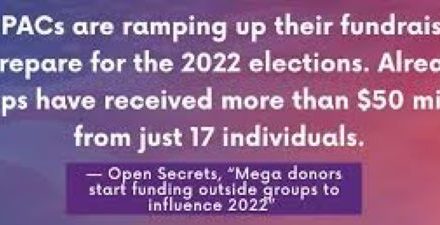