Are African Americans expected to shut up and suffer? That’s just not democratic.

Black America finds itself in an unusual moment. By any measure, many of our communities are suffering heavily during this economic downturn. Black unemployment is officially at 16.1 percent (some believe the real number hovers around 28 percent, making nearly one-third of black America jobless). Even those who have been fortunate to keep their jobs have seen their weekly wages decline.Â

The foreclosure crisis has also disproportionately affected black communities — we are 70 to 80 percent more likely to have lost our homes. And it is well known now that there is a direct correlation between racist lending practices and the vulnerability of our communities to foreclosure.

Faced with failing schools (while we wait for Superman) and the destabilizing effects of the prison industrial complex (nearly 1 million of us are locked up; families are destroyed as the rate of black female incarceration skyrockets, leaving many of our children languishing as wards of the state), entire communities — even entire cities — have been engulfed in what seems to be spiraling cycles of misery and hopelessness.

And yet we find ourselves embroiled in a heated public debate over whom to hold accountable for the failure to address these conditions. Recently, Cornel West offered a strident critique of President Obama’s relative silence on this matter. For him, the president has failed to address substantively the conditions of the poor and the most vulnerable in our society. Instead, West maintains, Obama has been too concerned with appeasing the robber barons on Wall Street.

Many took offense, not only with the personal nature of the criticism but also with the fact that West dared to criticize the president at all. Some African Americans hold the view that this only contributes to right-wing attacks against Obama, making him vulnerable in 2012. Others believe that such criticisms betray an unreasonable expectation that Obama owes something to the black community because he is the first black president — a troublesome black identity politics, they might say.

Worries about Democrats closing ranks for an upcoming election seem, to me, at least, to be a perennial (and uninteresting) concern. I am more interested in the underlying anxiety about black people criticizing Obama. It is as if we are being told to keep our mouths shut.

Three points need to be made about this issue. First, the challenge to black criticism of Obama reveals the persistence of a certain form of black identity politics. What is at work here is a startling effort to police black dissent in the name of race loyalty. This may be rooted in very different sensibilities.

There are those, as Gary Younge notes in the Nation, who hold that presidents, generally, do not affect their conditions of living. And if we are going to have a president, it might as well be a black one, and we should support him no matter the concrete realities of black communities. American politics don’t work, and Barack Obama can’t change that fact. One could view this as race loyalty from below.

Others maintain that support of Obama reflects a commitment to racial advancement. To criticize him is, in effect, to turn one’s back on the black freedom struggle of which Obama is the culmination. One might think of this as racial loyalty from above. It is the latest version of racial uplift rooted in a particular black-elite aspiration to hold on to the levers of power.

In both instances, criticisms of the president by black people are met with impatience or fierce condemnation. Race loyalty joins with a lingering commitment among the broader public to postracialism.

This takes me to the second point. Postracialism is the latest effort to get rid of blackness; it is part of a neoliberal commitment to color-blindness. And it is often used to insulate Obama from criticisms about racial policy. Here, racial distinctiveness is denied. We are all just human beings. And any appeals to race constitute a holdover from a politics of old.

So we’re left with the New Deal rhetoric of "lifting all boats" — a way of talking that is designed, in part, to evade the scorn of Southern Democrats and leaves intact an idea of whiteness that undermines genuine democratic transformation. Obama, when asked to address black suffering, is called the president of all Americans.

Well, damn, aren’t we Americans, too? The challenge in such an environment is how to address issues that actually involve race, and to do so without appeals to crude notions of racial solidarity or ideas that all black people hold the same interests because they’re black.

This takes me to the last point: that the combination of race loyalty and postracialism effectively banishes black suffering from public view. We see Hispanic organizations demanding the passage of the DREAM Act; we saw the LGBT (lesbian, gay, bisexual and transgender) community push for the repeal of "Don’t ask, don’t tell"; we witnessed the president of the AFL-CIO, Richard Trumka, threaten reprisals for those politicians who refused to support labor’s agenda.

What is going on here? One could be a bit cynical and say that this is just plain old politics. Folks are using race loyalty as way to keep black folks in line. So the Rev. Al Sharpton, Tom Joyner and others appeal to black solidarity as a way of shoring up the base. And yet Obama and the Congress don’t have to deliver "the goods" because any race-specific policies are rejected out of hand as holdovers from a time long gone. But I want to resist going there … for now.

What I do know is that folks are really scared to talk about racial inequality in this country. That fear stems from the belief that any effort to address the suffering of black communities directly would trigger deep-seated prejudices that still animate American life. America would lurch even farther to the right and all hell would break loose.

In 1903, W.E.B. Du Bois published The Souls of Black Folk. He dared to take on the power and influence of Booker T. Washington. Du Bois was concerned about Washington’s style of leadership. He believed that it undermined democratic life within black communities. Too many cowered before him. Too many stood by silently for fear of reprisal.

Du Bois wrote: "[T]he hushing of the criticism of honest opponents is a dangerous thing … Honest and earnest criticism from those whose interests are most nearly touched — criticism of writers by readers, of government by those governed, of leaders by those led — this is the soul of democracy and the safeguard of modern society."

He was right. What is at stake here is not some idea of race loyalty. Black people are suffering, and we need to engage that suffering publicly and directly. And that isn’t an issue of whether someone is black enough. This is about genuine democracy, about holding to account anyone, including ourselves, who fails to muster the moral and political courage to respond to this crisis.

Do the fact of blackness and the fact of Obama’s presidency commit us to some kind of uncritical loyalty? Are we to stand by silently in the face of this devastation? Absolutely not! In these critical times, to borrow a phrase from the late Palestinian critic Edward Said, "Never solidarity before criticism" must be our cry.

Eddie S. Glaude Jr. is chair of the Center for African American Studies at Princeton University. 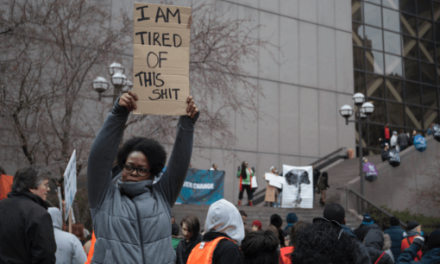