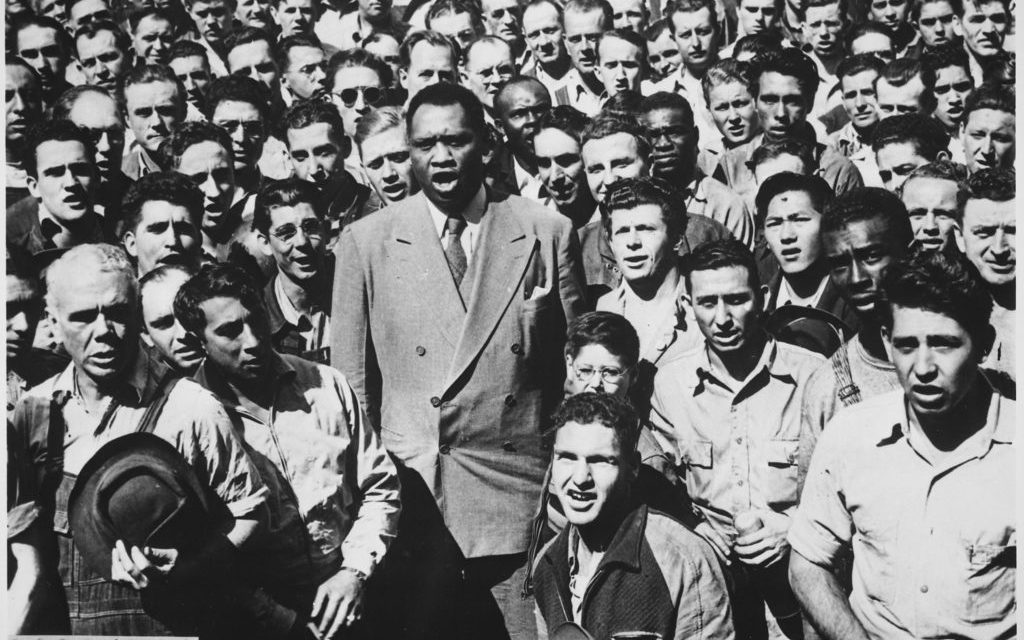 In other words, as Horne writes in Black and Red: W.E.B. Du Bois and the Afro-American response to the Cold War, 1944-1963, “the confluence of the streams of civil rights, and socialism, national liberation and peace, flowed ineluctably into” them. Consequently, both were subjected to the ceaseless scrutiny and sanction of the U.S. Cold War state. One example of this repression—used against countless “subversives” to deny them the accoutrements of citizenship—was the revocation of their passports until Kent v. Dulles rendered such practice unconstitutional in 1958.

The biographies of Du Bois and Robeson brilliantly bookend three decades of Horne’s unparalleled exhumation of Black radicals who had hitherto been obscured and omitted, marginalized and misrepresented, denounced and dismissed from Black history.

What I am naming the “Horne biographical method” is a technique of interrogating, excavating, critiquing, and re-historicizing a crucial era of Black history, approximately bounded by the cases of Angelo Herndon (1932) and Angela Davis (1972). This epoch fundamentally shaped, and was shaped by, the lives of leftist freedom fighters including Benjamin J. Davis Jr., William Patterson, Ferdinand Smith, Paul Robeson, and Shirley Graham and W.E.B. Du Bois.

Horne acknowledges that each biography adds “texture” to a central line of inquiry inaugurated in Black & Red—that the dismantling of Jim Crow in the United States and the courting of decolonizing nations in the Global South were constituted by Black and Red Scares that demanded the decimation of labor and the Black left in exchange for liberal rights and recognition. He writes, “[The] civil rights victory had to be carried out while ousting black Communists… from previously held positions of influence among African-Americans.

This opening of democratic space for blacks carried the possibility of creating more room for Communists, trade unions, and so on. The trick was to open democratic space for blacks while closing it down for their traditional allies.” Further, “to charge Moscow credibly with human rights violations…Jim Crow had to go. But part of this bargain was that radicals and socialists in black America…had to be marginalized.” Erik McDuffie terms this guiding premise the “Horne Thesis”:

[It is] the argument that white supremacy and anticommunism were the major forces shaping post-World War II Life and politics in the United States, with significant implications for African-descended and colonized people globally…U.S. government officials brutally suppressed…African American leftists who pursued an anti-racist, anti-imperialist, proletarian internationalist agenda.”

On the one hand, the Horne biographical method expounds the indelible contributions of Black radicals that have been largely excised from hegemonic narratives of the Black experience. On the other hand, it exposes the structures, processes, contexts, and conjunctures that have created the conditions for such epistemological and political exile.

The stalwarts profiled by Horne have much in common. They internationalized the African American freedom struggle to utilize global resources, connections, networks, and allies to put the United States on the defensive; established radical routes of solidarity through travel that traversed several continents; refused to renounce their socialist/communist, anti-imperialist, and internationalist positions even as many Black activists moved to the center or to the right; and were characterized domestically as dangerous, subversive, and seditions for their activism, but were welcomed and celebrated abroad.

Moreover, all were associated, directly or indirectly, with forms of activism that defined Black left activism: defense of the Scottsboro boys, involvement in the Council on African Affair’s anti-apartheid and anti-colonial advocacy (especially after 1941), participation in the 1949 World Congress for Partisans for Peace and subsequent circulation of the Stockholm Peace Appeal, and contribution to the 1951 charge of genocide levied at the United States before the United Nations (a path forged by Du Bois in Color and Democracy [ca. 1945] and An Appeal to the World [1946]).

Each was thereupon subjected to the violent persecution of the Cold War state through indictment, incarceration, travel restriction, denial of income, unrelenting surveillance, or some combination thereof. Above all, this cadre was deeply influential in racialized communities inside and beyond the United States—sometimes because of their radicalism, sometimes despite it.

Rather than simply chronicle the importance of each individual, Horne explicates the entanglements of his protagonists’ praxes. Patterson encourages Davis (who joined the Communist Party in 1933) to get involved with the Angelo Herndon case, which influences his decision to become a card-carrying Red. Smith and the National Maritime Union actively participate in Davis’s 1943 and 1945 Harlem City Council campaigns. Graham Du Bois moves to New York at the time of Davis’s first campaign, and soon after joining the Communist Party, supports his re-election. Du Bois is introduced to progressive and radical circles by his wife in the late 1940s, and she inspires his eventual membership in the Communist Party. Graham Du Bois attends the notorious fundraiser organized by the Civil Rights Congress (of which Patterson and Smith are founding members) that ultimately erupts into the Peekskill Riot of 1949, at which Robeson is slated to perform. Robeson is part of a large contingent that bids farewell to Smith on August 16, 1951 when, after years of surveillance, immigration hearings, and incarceration, he leaves the United States for good. Thus, the Horne biographical method elucidates the ways in which these mutually constituted lives cultivated a deep comradeship that empowered them to challenge regimes of domination and to weather brutal statist repression.

As early as 1980, British Prime Minister Margaret Thatcher declared TINA—that there is no alternative to the destruction of unions, the extraction of surplus value from racialized populations to counteract the falling rate of profit, the globalization of production in search of exploitable and expendable labor, and the shift to rentier economies in the Global North and the veritable re-colonization of the Global South.

The Horne biographical method brings into sharp relief that this crushing of alternatives was made possible by the decimation of the left generally, and Black radicals particularly. This retelling of the history of civil rights, decolonization, internationalism, and the Cold War through the lives of indomitable Black leftists fundamentally challenge sanitized renderings of Black history built upon “astigmatic and myopic” liberal progress narratives; platitudinous dichotomies (i.e., integration versus separatism, liberalism versus nationalism, race versus class); and anti-Marxist and anticommunist distortion.

Horne’s recuperation of luminaries such as Robeson, Patterson, Davis, Smith, and the Du Boises, and of radical Black internationalism more broadly, vivifies former Greek Finance Minister Yanis Varoufakis’s exhortation of TATIAnA: that always there is an alternative.