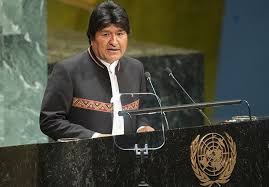 “Transnational companies control food, water, non-renewable resources, weapons, technology and our personal data. They intend to commercialize everything, to accumulate more capital. The world is being controlled by a global oligarchy, only a handful of billionaires define the political and economic destiny of humanity. 26 people have the same wealth as 3.8 billion people. That is unfair, that is immoral, that is inadmissible. The underlying problem lies in the model of production and consumerism, in the ownership of natural resources and in the unequal distribution of wealth. Let’s say it very clearly: the root of the problem is in the capitalist system.”

Sisters and brothers of the International Organizations and all the peoples of the world:

Once again we meet in the most important multilateral organization of humanity, to reflect and analyze collectively on the global problems that concern the peoples of the world.

We note with concern the deterioration of the multilateral system, product of unilateral measures promoted by some states which have decided to ignore the commitments, good faith and global structures built for a healthy coexistence between states, within the framework of international law and the basic principles of the Charter of the United Nations.

We meet in this forum to discuss and find solutions to the serious threats facing humanity and life on the planet.

The Threat to Mother Earth

Our house, Mother Earth, is our only home and is irreplaceable. It increasingly suffers more fires, more floods, hurricanes, earthquakes, droughts and other catastrophes.

Each year is hotter than the previous one, the thaws are greater, the level of the oceans grows. Every day we suffer the disappearance of species, soil erosion, desertification and deforestation.

Sisters and brothers, we are warned that if we follow this course of action, by the year 2100 we will reach an increase of 3 degrees Celsius. That would imply massive and devastating changes.

The consequences of climate change will condemn, according to data from our organization [the United Nations], millions of people to poverty, hunger, no potable water, losing their homes, forced displacement, more refugee crises and new armed conflicts.

Sisters and brothers, in recent weeks we have been surprised by the forest fires that have been unleashed in different parts of the planet: in the Amazon, in Oceania and Africa, affecting flora, fauna and biodiversity.

In recent weeks, fires have broken out in Bolivia, which we have been fighting against using our financial, technical and human resources. To date, our country has spent more than $15 million to mitigate fires.

We thank the International Community for their timely cooperation in our fight against the fires, as well as their commitment to participate in post-fire actions.

Sisters, brothers and the peoples of the world:

The arms race, military spending, technology at the service of death and the unscrupulous arms trade have increased.

The financial system remains undemocratic, inequitable and unstable, which privileges tax havens and the banking secrecy that subjects weak countries to accept conditions that perpetuate their dependence.

We note with sadness that the great social asymmetries continue. According to Oxfam, today 1.3 billion people live in poverty, while 1% of the richest kept 82% of the world’s wealth in 2017.

On the other hand, the creative capacity of humanity, every day surprises us with new inventions and new technological applications. They have offered great solutions to very complex problems. Technology has meant a qualitative leap for humanity. However, it is necessary that from this multilateral body agreements on the matter be established with the participation of all States.

The Root Problem: The Capitalist System

Sisters and brothers, it is essential to talk about the structural causes of the different crises.

The world is being controlled by a global oligarchy, only a handful of billionaires define the political and economic destiny of humanity.

26 people have the same wealth as 3.8 billion people. That is unfair, that is immoral, that is inadmissible.

The underlying problem lies in the model of production and consumerism, in the ownership of natural resources and in the unequal distribution of wealth. Let’s say it very clearly: the root of the problem is in the capitalist system.

That is why the United Nations is more relevant and important than ever.  Individual efforts are insufficient and only joint action and unity will give us an opportunity to overcome them.

As we have already said, the responsibility of our generation is to give the next a fairer and more human world.

That will only be achieved if we work together to consolidate a multipolar world, with common rules, defending multilateralism and the principles and purposes of the Charter of the United Nations and International Law.

Sisters and brothers, in Bolivia we have taken very important steps:

We are the country with the highest economic growth in South America, with an average of 4.9% in the last six years.

Bolivia ranks third country in the world with the highest participation of women in Parliament. More than 50% of Parliament is made up of women.

Bolivia was declared a territory free of illiteracy in 2008.

The infant mortality rate was reduced by 56%.

We are in the process of implementing the Universal Health System, which will guarantee that 100% of Bolivians access a free, dignified service, with quality and warmth.

We passed a law to provide free health care for cancer patients.

The above data are part of the achievements of our democratic and cultural revolution, which have given Bolivia political, economic and social stability.

How do we achieve these achievements in such a short time? How is it that Bolivia has taken the path to defeat poverty and underdevelopment?

Thanks to the conscience of the people, of the social movements, of indigenous, peasants, workers, professionals, of men and women of the countryside and of the cities.

We nationalized our natural resources and our strategic companies. We have taken control of our destiny.

We are building a Community and Productive Social Economic Model, which recognizes basic services (water, electricity, telecommunications) as a human right.

Today we can say with pride and optimism that Bolivia has a future.

Sisters and brothers, there is a pending issue in the region, the sea is indispensable for life, for the integration and development of peoples.

Therefore, Bolivia will not give up its right to sovereign access to the Pacific Ocean.

In 2015 and 2018, the International Court of Justice of the Hague, through its decisions, ruled on the following elements:

First: In paragraph 19, of the ruling of October 1, 2018, it established that “Bolivia had a coastline of more than 400 kilometers along the Pacific Ocean.” [This Pacific coastland was lost to Chile in a late 19th century war].

Second: In paragraph 50, of the ruling of September 24, 2015, it established that “The issues in dispute are not matters resolved by arrangement of the parties, by arbitration, or by judgment of an international tribunal” or “governed by agreements or treaties in force”.

Third: In paragraph 176, of the ruling of October 1, 2018, it established “However, the conclusion of the court should not be understood as an impediment to the parties [Chile and Bolivia] continuing their dialogue and exchanges, in a spirit of good neighborhood, to address the issues related to the situation of [land-locked] confinement of Bolivia, a solution that both parties have recognized as a matter of mutual interest. With the will of both parties, significant negotiations can take place.”

Sisters and brothers, this judicial decision has not ended the controversy, on the contrary, it is explicit in recognizing that it continues and emphasizes that it does not close off the possibility of both states finding a solution.

Therefore, the United Nations Organization must monitor and demand full compliance with the decisions of the court, so that both peoples continue negotiating in good faith, to close open wounds. It is possible to promote a good neighborhood spirit, and open a new time in our relationship, to forge mutually acceptable and lasting solutions.

Sisters and brothers, our countries face diverse and conflicting situations, which must be approached in a sovereign manner and solutions must be found through dialogue and negotiation, in favor of the interests of the people.

Bolivia, in accordance with the resolutions of the United Nations, ratifies its rejection of the economic and financial blockade imposed against Cuba, which violates all human rights.

Finally, sisters and brothers, I take this opportunity to thank all member countries for their support in the various initiatives promoted by Bolivia.

To conclude, we ratify our commitment to consolidate a new world order of peace with social justice, in harmony with Mother Earth to Live Well [Vivir Bien], respecting the dignity and identity of the peoples. 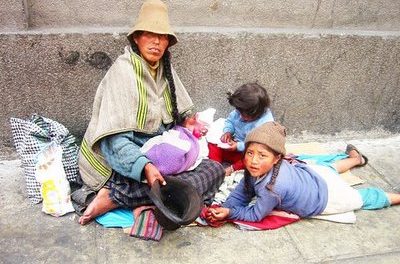 Q & A on the National Constituent Assembly in Venezuela 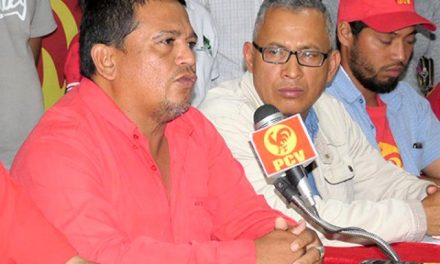