One of the few times Donald Trump talked an iota of sense during his 2016 presidential campaign was when he lambasted the trillions of dollars wasted waging war in the Middle East.

In Charlotte, North Carolina on 26 October 2016 he argued that those wars “have produced only more terrorism, more death, and more suffering” and the money involved could have been better spent at home.

Yet in the last few weeks Trump has announced his determination to move CIA director Mike Pompeo – to be replaced there, he hopes, by torturer Gina Haspel – to head the State Department and has named superhawk John Bolton, a former ambassador to the United Nations, to be his national security adviser.

Bolton’s bellicosity strikes terror into the hearts of activists who have followed his career. Social media lit up between fears of war with Iran and war with North Korea.

He is, as The New York Review of Books rightly put it, “one angry man.”

Bolton, of course, never admitted error regarding his belligerent stance in the 2000s on Iraq and staunchly supported Israel’s deadly actions in Lebanon in 2006. He has long been a hardliner on Palestine.

Anti-Palestinian bigots such as Israeli justice minister Ayelet Shaked quickly trumpeted the announcement. She lauded the appointment and – from one racist to another – praised the Trump administration for emerging as the most sympathetic government Israel has ever seen.

Three states
Bolton has proposed a “three-state solution”: Israel, giving Gaza to Egypt, and giving the West Bank to Jordan.

He contended in a 2014 Washington Times op-ed that under his plan, “The contentious issue of Jerusalem’s status as the purported capital of ‘Palestine’ would disappear, since Amman would obviously be the seat of government for an enlarged Jordan.”

That was magical thinking. With a handful of words he disposed of Jerusalem, one of the most contentious issues dividing Israelis and Palestinians.

Having backed Israeli violence against Palestinians throughout his career, Bolton then cited Palestinian weakness as a key reason there cannot be a two-state solution. “There simply cannot be ‘two states living side by side in peace and security’ when one of the ‘states,’ for the foreseeable future, cannot meet the basic, practical requirements for entering into and upholding international commitments, including, unfortunately, the glaring lack of its own legitimacy.”

Though he did not refer to it directly, the apartheid reality was apparently better in his view than pressing Israel on two states or equal rights in one.

Bolton’s “three-state solution” lines up neatly with the idea floated by Trump’s then strategist Steve Bannon at a January 2017 dinner to discuss cabinet picks. As Michael Wolff recounts it in Fire and Fury: Inside the Trump White House, Bannon argued “Let Jordan take the West Bank, let Egypt take Gaza. Let them deal with it. Or sink trying.”

Former Fox News boss Roger Ailes declared at the same meal that Bolton is a “bomb thrower” and “a strange little fucker. But you need him. Who else is good on Israel?”

Ailes has subsequently died and Bannon has been fired by Trump. Yet the latest appointments almost give the impression that they are still calling the shots. And increasingly those shots are pointing toward military confrontation.

As journalist Sam Husseini tweeted: “With the Bolton appointment and the Pompeo and Haspel nominations, Trump is obviously moving to an even more war administration. As I wrote a year ago, like Obama, he ran anti-war and is doing the opposite.”

With the Bolton appointment and the Pompeo and Haspel nominations, Trump is obviously moving to an even more war administration. As I wrote a year ago, like Obama, he ran antiwar and is doing the opposite. “How Trump and Obama are Exactly Alike”:

Bracing for impact
What can we anticipate from Trump and his hardliner advisers in the Middle East?

The wider region will go from bad to worse if Trump and Bolton manage to undo the 2015 Iran nuclear agreement later this year. War with Iran prior to the 2018 mid-term elections or 2020 presidential elections would complete the unraveling of the region initiated by President George W. Bush 15 years ago this month.

The massive resistance to the Iraq war in 2003 failed to head off that catastrophic undertaking. This time, should Trump, Pompeo and Bolton push the country toward war with Iran, the numbers in the streets may prove bigger, but simultaneously could face armed militias roused by the Trump administration.

Grim days likely lie ahead. Whether Europe has the fortitude to push back against any coalition efforts organized by Pompeo as secretary of state remains to be seen. Tony Blair, then Britain’s prime minister, happily followed Bush down a road of lies and horror in Iraq.

Perhaps European leaders harbor greater doubts about Trump and the neoconservative and conservative extremists he is surrounding himself with in 2018.

They would do well to keep in mind that Bolton wrote in his book Surrender Is Not an Option: Defending America at the United Nations and Abroad that “My happiest moment at State was personally ‘unsigning’ the Rome Statute,” which set up the International Criminal Court. And they should bear in mind the friends he keeps, such as notorious Islamophobes Pamela Geller and Robert Spencer.

As for Palestine, further chaos in the Middle East will likely prove a boon for Israel’s settler movement as it illegally seizes still more occupied Palestinian land in the West Bank, including East Jerusalem. Israel, the US, Egypt and Saudi Arabia can only be expected to ratchet up the pressure on the Palestinian leadership and Palestinian people alike.

Nihad Awad of the Council on American-Islamic Relations got it right when he said, “Bolton is the last person who should be entrusted with this critically important position, which requires sound judgment and a fact-based approach to national security matters.” Awad’s forecast that Bolton’s appointment “could lead to unnecessary and counterproductive international conflicts” is quite likely to prove accurate as the Trump administration continues to come unglued and looks for an enemy to help right itself on the domestic front ahead of upcoming elections.

It’s a profoundly cynical argument, but one that fits entirely with the narcissistic and vicious character traits Trump has displayed to date. Bolton is unlikely to be any check on Trump’s worst instincts – and, in fact, is apt to cheerlead those instincts. 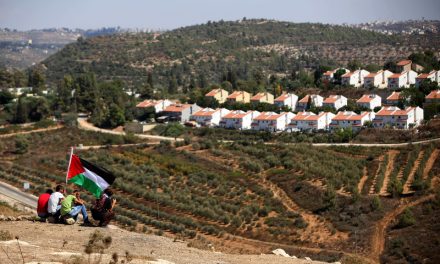