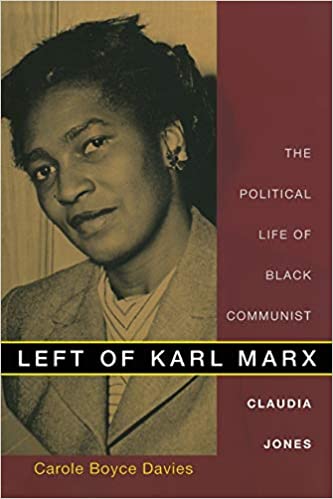 Reviewed by by Sarah Harper and Karyn Pomerantz

This blog post is part of a series that briefly reviews the immense contributions of black revolutionaries fighting racism and capitalism, primarily in the United States during the early to the mid-20th Century.

Some people view Marxism and communism as a white thing since the most famous revolutionaries, such as Marx, Lenin, and Mao, were white or Asian.  Even progressive history books largely ignore the revolutionary contributions of American black communists, such as William Patterson, Paul Robeson, Ben Davis Jr, Louise Thompson, and Lucy Parsons. They and many of their comrades advocated for working class unity to topple capitalism around the world in spite of Jim Crow intimidation, the patriotism pushed during World War II, and McCarthy era imprisonments and black lists.

Many white communists and socialists believed eliminating capitalism would automatically abolish racism and sexism.  They have been criticized for not always emphasizing the need to prioritize the fight against racism and sexism under capitialism as necessary to bring about its overthrow. Communist leaders did not consider the unique oppression of black women workers who were oppressed by class, gender, imperialism, and race. While eliminating capitalism removes the reasons for each form of oppression, black women recognized the need to prioritize the fight against racist ideas and practices.  Black women progressives raised the critical need to fight sexism in the Party and society. Many all-black revolutionary groups, such as the Marcus Garvey’s Return to Africa Movement and the Black Panther Party, promoted a nationalist perspective instead of building united working class organizations and movements. These blog posts highlight the work of communists and socialists who worked for solidarity among all groups of workers.

Claudia Jones was a prominent leader of the Communist Party USA (CP) from the 1930s to 50s. This review of her life and political work will cover her political philosophy of multiracial internationalism, her life as a journalist, her involvement in the arts, and her commitment to a socialist solution.

She was born in Trinidad in 1915 and immigrated to New York City in 1924 when she was 8. Her mother died at age 37 from overwork at a factory, and her sisters became domestic workers. Jones joined the struggle to free the 8 Scottsboro Boys in 1931, who were falsely accused of raping a white woman.  The white woman later admitted that she lied. Jones also listened to the speeches of communists on Harlem street corners. These experiences propelled Claudia to join the Communist Party (CP) USA in the 1930s.

Her contributions included youth work, journalism, and anti-apartheid campaigns. She served as editor and founder of many communist and anti-racist publications in the US and England, where the US deported her.

Claudia Jones became a principal organizer and main theoretician for the CP in the 1940s and 50s.  She was one of the first to write about the linkages between race, class, gender and imperialism.  Her commitment to socialism, internationalism, and community organizing influenced many feminists in the 1970s and later, including the Combahee River Collective of black women in New England.  In response to white feminists’ attacks on men and the patriarchy as the cause of their oppression, the Collective wrote:

They also called for a socialist solution.

“We can accelerate the militancy of Negro women to the degree with which we demonstrate that the economic, political and social demands of Negro women are not just ordinary demands, but special demands flowing from the special discrimination facing Negro women as women, as workers, and as Negroes….Yes, and it means that the struggle for social equality of Negro women must be boldly fought in every sphere of relations between men and women.” (Claudia Jones, “For the Unity of Women in the Cause of Peace!” 1961 p.29).

The militancy of black women, she argued, arises from their experiences and treatment by the ruling class.  If they are marginalized by the left, their power, political involvement and militancy are diminished. “Once Negro women undertake action, the militancy of the whole Negro people, and thus of the anti-imperialist coalition, is greatly enhanced” (p.38).

Jones highlighted the ways capitalism oppressed black women to secure higher profits and labor. As the most oppressed group, black women experienced large wage differentials (continuing today), had no Social Security if they were domestic workers (most were), and suffered high unemployment rates.  Under the New Deal during the Depression in the 1930s, FDR’s National Recovery Administration set national wage and labor practice codes but excluded black workers from earning higher wages.

These conditions led to rebellion and unionizing among black women, displaying the militancy that Jones predicted.  They were active, bold labor organizers.  During the Depression, they carried out strikes in multiple industries, fought for equal wages under FDR’s New Deal programs, and helped organize the CIO.

The Communist Party USA led many labor strikes and union organizing including the CIO. They urged the unions to include workers of all nationalities and racial categories.  Immigrant Latinas, such as Luisa Moreno, directed many union struggles with black, Mexican, and white workers to overcome racism and pay differentials, and provide a base for struggles. (African America and Latinx History of the United States, chapter 6). Jones emphasized the unique position of black women:

“It is incumbent on progressive unionists to realize that in the fight for equal rights for Negro workers, it is necessary to have a special approach to Negro women workers, who, far out of proportion to other women workers, are the main breadwinners in their families.  The fight … to upgrade her on her job is a major way of struggling for the basic and special interest of the Negro woman worker (Left of Karl Marx).”

Racism flourished during this time, but several unions, such as the Meatpackers, made anti-racism one of their guiding principles.  Off the job, black people were lynched and murdered.

The CP designated Claudia as an editor and writer for their newspapers and pamphlets.  Claudia used these positions to disseminate Party ideas, promote various campaigns, and urge more attention to women’s issues.

She also wrote poetry and established the West Indian Gazette and Afro-American Caribbean News when she lived in England.

Jones’ writings and communist activities in the US led to her imprisonment for a year in Alderson, West VA (with union organizer Elizabeth Gurley Flynn) under the McCarron-Walter Internal Security Act of 1952. She was deported to England in Dec of 1955, ironically transported on the luxury ship, the Queen Elizabeth I.

There was a large Caribbean population in London. However, Claudia experienced the racism of the Great Britain Communist Party (GB CP) and the snobbish behavior of the Caribbean intellectuals who tried to isolate her. She turned to journalism to overcome this divisiveness by creating the Gazette. The Gazette included articles on international events, local business ads, the arts, and political positions.  Its goal was to create a sense of community among the different groups of Caribbean immigrants.  It called for multi-ethnic collaboration. The immigrants were also galvanized by a race riot in 1958 in Notting Hill against the growing Caribbean population. As a consequence of the race riot, a gang of white youth murdered Kelso Cochrane in May 1959. After the murder she thought it would be very helpful to start a carnival celebration to develop relationships among people from former Caribbean British colonies.  The Carnival was not just about dancing and music. It had very political overtones of fighting racism and colonialization. Her work helped create the West Indian diaspora.

Her work in the Caribbean community may have had nationalist overtones, but she had never swayed from her internationalist socialist outlook.

Claudia Jones was rooted in the Marxist Leninist ideology. However, she did not believe it dogmatically. She analyzed the current conditions, especially among black women workers and ways that they would become a potent force for revolution. Being marginalized by the GB CP did not deter Claudia from continuing her work.

Despite deteriorating health, FBI harassment, and prison time, she stayed politically active until her death in 1964.  She continued to advance international unity and socialism, maintaining her membership in the Party to struggle for women and racial equity. Claudia is buried in London to the left of Karl Marx. Her life reminds us that we must make the struggle against the super-exploitation of members of the working class — blacks, Latins, women, immigrants, and other minorities – a priority in all struggles against oppression and injustice. Capitalism uses racism and sexism not only to increase profits but to separate us from each other, in our daily lives and in our struggles for betterment. In unity lies our strength.

This review appeared in Multiracial Unity in September 2018.