Book Review: Making our Own History: A User’s Guide to Marx’s Historical Materialism 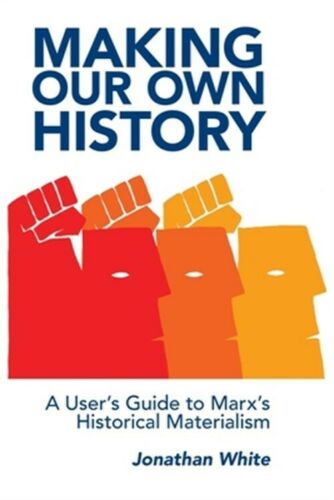 Jonathan White, British Marxist, professor, union official, trustee of the Marx Memorial Library in London, Associate Editor of its journal Theory and Struggle, and lecturer at the Library’s Workers’ School, has penned a powerful argument for understanding and teaching historical materialism.

Despite  the book’s  brevity, the author packs a wealth of Marxist thought into the first half of the book which he calls “The Foundations of Historical Materialism,” and skillfully cites numerous primary sources coupled with his own observations written to explain core concepts to people with no prior knowledge.

White gives us an overview of the importance of the relationship between thought, understanding, and political process to Marx and Engels.  He identifies historical materialism as central to Lenin and vital to the liberation of mankind through socialism.  He cites numerous examples of the ruling class repeatedly declaring Marxism and class struggle dead, especially after World War II  in the McCarthy/Cold War  era and then again after the collapse of the Soviet and Eastern European states between 1989 and 1991.  “Yet time and again these ideas return to haunt the rulers of the Earth.” For them profit  takes precedence over the needs of the people and our ecosystems, and profit drives their resource wars.

White sees the greatest shock to ruling class arrogance in modern times as the dual shock of World War I and the Russian Revolution.  The relative calm the rulers  reclaimed  after 1991 was again shattered by the crash of 2008-9 with the resulting anger and renewed appetite for struggle met with increased condemnations of socialism and Marxism.

The author labels Part II, Historical Materialism in Action, and provides a Marxist interpretation of contemporary history.  He provides examples of recent  and  current events to illustrate the point that “actions of our lives are not lost or wasted, but contribute to the liberation of humankind.”

An observation and a sentiment I fully endorse.

MLToday readers can get Making Our Own History at a considerable discount by entering the code “MML” on our online store redletterspp.com The same code applies for several other Praxis Press titles.

A great review!
MLToday readers can get Making Our Own History at a considerable discount by entering the code “MML” on our online store redletterspp.com The same code applies for several other Praxis Press titles.
We’d love to add this review to our blog.
Thanks comrades!