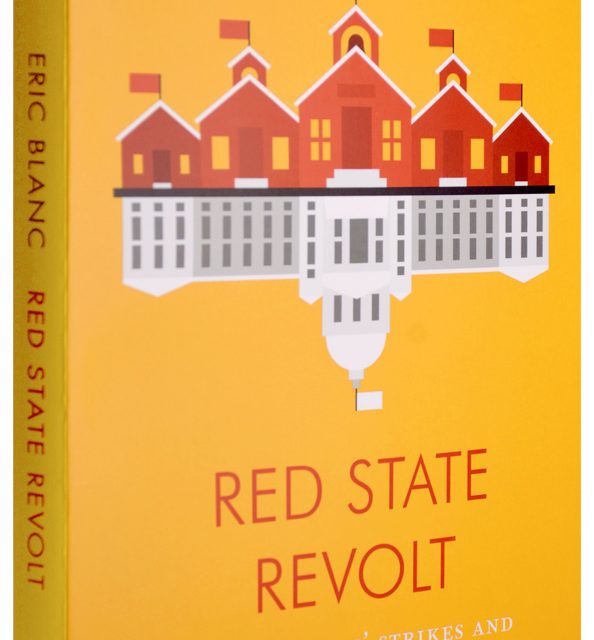 After a hiatus lasting decades, more strikes have occurred recently in the United States than at any time since the mid-1980s. In 2018, 485,200 workers walked off the job and this level of activity seems to have carried through 2019. Eric Blanc’s book, Red State Revolt, examines three education workers’ strikes that occurred in early 2018 that grabbed national attention and seemed to set off this strike wave. In early 2018 he was sent to cover the strikes in West Virginia, Oklahoma and Arizona by Jacobin magazine. He embedded himself in all three and indeed, as he explains, “I spent the bulk of my time organizing national solidarity for the strikers and talking politics with the core teacher activists. . .” He also read the Facebook groups set up by organizers in all three strikes, scoured the local press and interviewed “. . . over one hundred teachers, service personnel, organizers, students, union staffers, and top officials and superintendents.” He has written a very inside look at these strikes. His portrayal and analysis of them can help union activists how to organize and make their unions more effective.

The book is divided into three sections, The Roots of Revolt, The Power of Strikes and The Militant Minority. In the first section he shows that the causes of these strikes were more profound than portrayed in the national media, which primarily focused on the wage demands of the educators. Many of the leaders of the strikes preferred this term because other school personnel were frequently involved, not just teachers.

Emily Comer, a leader of the West Virginia strike stated, “. . .the national media haven’t been paying attention to the conditions in our state that made the election of Donald Trump possible–the exact same conditions that made our strike possible.” All three states had many similarities: state government run by Republicans, which had enacted tax cuts which led to budget cuts for education and other social programs; laws which prohibited public sector strikes and/or the right to collectively bargain; and wage scales which were not commensurate with their education. As one teacher stated, “Both  my wife and I have higher education degrees. So getting paid only for what we do is a real slap in the face.”

In addition to feeling underpaid, working conditions had been getting worse as class sizes grew and the social conditions of their students worsened. Emily Comer states, “ As teachers we have a unique window into the entire economy of our communities, so every day we see the effects the opioid crisis, poverty, students experiencing trauma. The worse the economy gets, the harder my job gets, it’s more stressful with more emotional burden. . .”

In all three states the teachers’ unions, the local affiliates of the American Federation of Teachers (AFT) and the National Education Association (NEA) did not represent a majority of the teachers and had attempted to combat this situation with the standard tactics of lobbying and attempting to elect “labor-friendly” politicians, usually Democrats. There was perception by union leaders and teachers alike that most teachers were, “…by and large a passive bunch.”

“There is at present no real sign of major action on their part,” as one teacher posted on Facebook.

Blanc notes that the Chicago teachers’ strike of 2012 had set an example for what a well organized group of teachers could accomplish by building within their local and winning public support for a better education system. Indeed one of the key leaders of the Arizona strike had participated in the 2012 action. But it took much more to set off these three strikes than the success of one well organized local.

In two of the three strikes, West Virginia and Arizona, the initial rank and file leaders, had been energized by the 2016 presidential campaign of Bernie Sanders and some had joined the Democratic Socialists of America (DSA). In West Virginia, some of these teachers got together and studied labor organizer Jane McAlevey’s book, “No Shortcuts” because they were looking for ways to turn things around for teachers.

In all three states, a small group of dissatisfied and angry teachers set up a Facebook group to find other similarly minded teachers. These groups mushroomed, to the degree that alternative and more restrictive groups had to be set up to better monitor and direct the movement. Blanc and the educators he spoke with emphasize that although these Facebook groups were important, day to day organizing in work sites was key. When this was not done or not done well, as in the case of the Oklahoma strike, the strike was not as successful.

Blanc writes, “Over the course of months, politics became the normal topic of conversation in lunchrooms, staff meetings, and normally apolitical community events.” Blanc is not referring to partisan politics here, but rather the politics of the teachers’ situation and struggle. The rank and file leaders made a point to avoid partisan politics, a policy which bore fruit. He quotes teachers who describe themselves as conservatives who supported the strikes 100%.

In the second and third sections of the book the reader gets a detailed breakdown of how all three strikes unfolded, the principal tactical discussions, the disagreements, the relation between the rank and file groups and both official teacher unions. Blanc shows how effective the strikes were compared with past tactics used by the local affiliates of the NEA and the AFT. These strikes really did “empower” the participants, to use a word that has become trite when used by many current labor leaders. Noah Korvalis, a leader of the Arizona strike states, “It’s hard to even sum up that feeling. You used to go to school, do your thing, and go home. Now if there’s a struggle we go to do something about it because we’re in it together. It’s not just that there are a lot more personal friendships–we saw that we had power.”

Blanc rightly sees the strike as one of the key, if not the primary, tool to establish the power of the working class to a level capable of transforming our society. “The red state revolt illustrates why the Left needs labor to win–and why bringing back the strike is an indispensable and urgent task for anybody interested in creating a better world.”

In the section entitled “The Militant Minority” Blanc shows how key this concept is to rebuilding the labor movement. Unfortunately he gives no credit to the originator of this concept, William Z. Foster, a Communist and leader of the 1919 Great Steel Strike. He does give a good and brief description of the concept, “. . . individuals with a class struggle orientation, significant organizing experience and a willingness to act independently of (if necessary against) the top union officialdom. . . [in the West Virginia and Arizona strikes] it’s not surprising that radicals were the only political current willing and able to consistently to fight for a sustained work stoppage.”

Also in this section he demonstrates how the lack of a militant minority, with an ability to do the necessary workplace and community organizing before and during the strikes, in Oklahoma led to that strike’s much more limited success. “What was missing in Oklahoma was a team of like-minded grassroots militants, armed with activist know-how, class-struggle politics and an orientation toward working within unions to push them forward.” The unity and solidarity of the strikers in West Virginia and Arizona stopped their respective state governments from unleashing the reprisals and repressive laws that were at their disposal, because of the tremendous political consequences such actions would have engendered given the public support for the strikes.

In the build up to these strikes, militant activists led other types of workplace actions to build their movement including wearing the same color shirt/blouse to work (red for ed), walk-ins in which the educators would hold demonstrations outside their schools and talk to parents bringing children to school before the start of the school day as well as large demonstrations at the state capital. These actions brought workers together and helped demonstrate their collective power against politicians indifferent or hostile to their plight.

It is heartening to note that in Arizona the press and many politicians resorted to high level of red-baiting to divide and defeat the educators with little success, due to the unity of the strikers and their belief in their cause. “Of course a few teachers took the bait. Yet the vast majority insisted that their movement was a united effort of all supporters of public education, rather than a socialist plot.” One teacher posted the following comment, “[GOP State Representative] Kelly Townsend wagged her finger in my face and called me a communist and I took it as a badge of honor. Being the exact opposite of whatever she is is nothing to be ashamed of.”

Did these strikes set off the recent surge in US strikes? They certainly helped demonstrate to US workers that workers can win in the face of a capitalist system that wants to deny them the ability to act collectively in their own interests. Objective conditions such as stagnating wages, erosion or disappearance of benefits and retirement plans also contributed to the surge.

Blanc rightly points to the fact that without class consciousness workers willing to do the day to day organizing necessary to build workers collective power these strikes and many that followed would not have occurred. He links the growth of the “socialist movement” after the 2016 elections to the strike wave. “Instead of treating the recent educators’ strikes and the massive growth of the socialist movement since 2016 as two separate and distinct processes, this chapter has shown that labor militancy and political radicalism advanced hand in hand. Had it not been for the resurgence of socialist politics set into motion by Bernie Sanders’s primary run, the course of struggle in these states would have looked very different.

He expresses some cautionary notes as well for those seeking to organize the militant minority. “Conditions need to be ripe–mass strikes can’t just be willed into being.” In all three states the established unions went along with the strikes despite their reticence to use the tactic. The objective conditions in those states were not like others where unions were present. “. . .these red states’ labor officialdoms [sic] were relatively weak, and that the Democrats were out of power, helps explain why radicals were effective in pressuring the unions into supporting illegal work stoppages. By way of contrast, much larger groups of leftist educators in cities like Chicago and Los Angeles have had to spend years patiently working within their unions to develop strong caucuses capable of overcoming the entrenched officialdom.”

Blanc’s book is a revelatory history of these three strikes which would benefit any union members seeking to make their organization a more effective class struggle organization. It would also be worthwhile to read any of William Z. Foster’s writing on the subject of the militant minority since he goes into greater detail on the concept itself and its efficacy for union members dedicated to class struggle and fighting to bring about socialism. 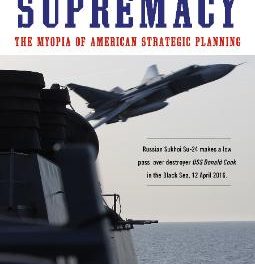 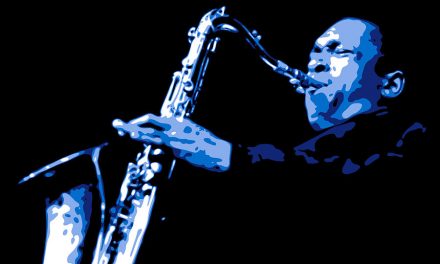