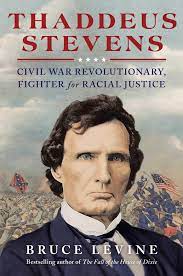 Author, Bruce Levine, has chronicled the career of a US politician dedicated to ending slavery and racial discrimination and has painted a vivid portrait of a fearless advocate. His  account lends few pages to the Vermont Baptist background that may have given birth to Steven’s egalitarian and humanitarian views, opting to highlight his public acts and leadership on the issues of slavery, the Civil War, Reconstruction, and the impeachment of Andrew Johnson.

Born to meager circumstances and with a club foot, Stevens once stated,” I am induced to thank my creator for having, from early life, bestowed the blessing of poverty.” He consistently displayed sympathy for the downtrodden and mistreated. Violent attacks on abolitionists and African Americans occurred in the north throughout the 1830’s. In 1836, in response to petitions to outlaw slavery in the District of Columbia, Congress adopted a gag rule refusing to even recognize receipt of petitions, resolutions, or memorials related to the issue.

The author describes Stevens’ belief in a kind of crude capitalism made up of small family farmers which he argued gave everybody a stake in Democracy. At the 1860 Republican Party convention, Stevens insisted the platform call for a bill to provide Homesteads. He also proposed the confiscation of slave holdings worth more than $5,000 to be broken into 40-acre parcels and given to freedmen along with $50 for building on the property. “Those that defend and support the country must have a stake in the soil; they must have an interest to protect and defend.” Stevens invested earnings from his law practice in real estate and an iron works. We aren’t informed of the profitability or lack thereof of those investments, but we do learn that Robert E. Lee’s forces destroyed the iron works during the war.

Levine does a great job tracing Stevens’ political career against the background of the most turbulent time in US history. He skillfully utilizes quotes, anecdotes and contemporary observations that illustrate the wit, courage, and conviction that made the man. He records Stevens’  movement through political parties seeking the best means to deliver an end to slavery and discrimination: Anti-Mason, Whigs, Union, and Republican.

Stevens worked with the Underground Railroad and earned the friendship of Frederick Douglass and the respect of W.E. B. Dubois who praised his “grim and awful courage.”  He was charged on the floor of the House more than once by supporters of slavery but remained calm, unyielding, and focused, at times surrounded and protected by his allies and friends. Stevens was also a supporter of rights for Native Americans, Chinese workers in California, and the right of women to vote and hold office.

The battle to retain the primacy of private property in the form of slaves is episodic through out the book, recounted in legislative debates, Supreme Court cases, and the fear that  slavery’s dissolution could call into question the relation between capital and labor in the North. The New York Times lamented the inability to confine the movement against capital to the South.

The work is an easy read that I would recommend for its excellent historical value, but I would forewarn readers, it is depressing to see how present-day history could have been changed had Stevens and his supporters been able to reshape the  power relations  in the post Civil War South.  Stevens was prophetic: “But reformation must be effected; the foundation of their institutions, both political, municipal, and social, must be broken up and relaid.”

Readers will see the all too familiar issues of voting rights, unequal distribution of wealth, the fight to maintain and fund public education, an end to discrimination, and the struggle for reparations persist more than a century and a half later!

Robert Bonner is former president of AFGE Local 2028 in Pittsburgh, PA where he represented US Veterans Administration workers.

Book Review – The St. Louis Commune of 1877: Communism in the Heartland