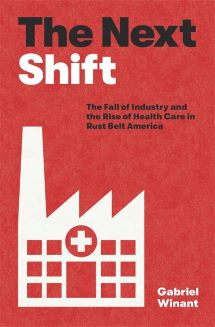 The Next Shift: The Fall of Industry and the Rise of Health Care in Rust Belt America , by Gabriel Winant.  (Harvard University Press, 2021, 368 pages.)

Gabriel Winant has written a wonderfully accurate description of our industrial devolution to our current, corporate- run, low- wage, segregated, health care economy in his 350-page account published by Harvard University Press.  He graphically describes life and work from the 1950s onward, unmasking the myth of happy “good old days” which we so often hear and read about in our local publications, those that still exist.

Winant paints a picture of the steelworkers that, “generally feared for their lives, hated their foremen, and needed a drink.” The work was hot, dirty, and dangerous, and he quotes one coke oven worker, Herb Edwards, “You talk about hell? This is hell.”

The hellishness brought back memories of my own. I recall a friend working topside on the coke batteries that just had a horrible night where everything that could go wrong did go wrong. There had been a steady drizzle, spills, lids blowing off with flames shooting out, no breaks, etc., etc. At 5 o’clock in the morning my friend looked across the top of the coke batteries, through the mist and the haze and saw his grievance man coming toward him in a three-piece suit and wooden shoes. “He looked like Jesus Christ coming across there. There was nobody I wanted to see more than my grievance man!”

Winant does not omit the incessant red baiting that occurred and the coalition of Catholic priests and local officeholders who, with the aid of federal agents, worked to assure the region’s Southern and Eastern European working class turned against the Reds. He vividly captures work and home life in the mill towns including the impact on spouses and the racism that permeated the mills and the communities right down to the segregated housing that found Blacks at the bottom of the hills, Slavs, Poles and Italians on the slopes, and Irish at the top. The dirtiest air was also found at the base of the valleys and wafted uphill, as did layoffs.

The hospital health care system, which Winant describes as the greatest accomplishment of organized labor, channeled “income into the metropolitan economy, filling the coffers of well-positioned corporate actors, shoring up the positions of local officeholders, and reproducing the social arrangements of decaying industrial Pittsburgh.” What has been portrayed as a miraculous rebirth or painless transition to “meds and eds” (medical care and education) has been anything but a miracle. It has not significantly dented the racism and inequality that existed in the steel industry. The end of the 1970s saw the mill towns overcome by crisis as US Steel invested in Marathon Oil and rejected upgrades or investments in the mills which had been the backbone of survival for so many. David Roderick, US Steel CEO declared US Steel was in the business of making profits, not steel.

What now flourished, after the steel industry shutdowns, was drug and alcohol abuse, suicide, schizophrenia, domestic violence, depression and overall poorer health outcomes. The political class piled on by reducing the unemployment benefit period, by Reagan cutting eligibility for Aid to Families with Dependent Children, and by Pennsylvania Governor Richard Thornburgh implementing welfare reform that made thousands ineligible. They followed that up in the 80s with a $300 million prison building binge. Retraining funds were woefully inadequate.

Hospitals were left as the only game in town as the region hemorrhaged population, and women  soon made up a much larger part of the workforce than before. However, African American women predominantly filled the roles of nursing assistants, house keepers, and dietary workers and were never given opportunities for training and promotion. Low-wage workers, most can’t afford cars and are dependent on public transportation.

And the new health care system? Under the new corporate health care models, the Physician and Registered Nurse positions, which once commanded some respect for the skills and judgement they entailed, are now just checklist monitors. Staff to patient ratios are too high to be safe for patients or staff. The latter are forced to work mandatory overtime and may be sent home if the patient census drops. Wages are suppressed through sharing of pay data, unionization is fiercely opposed, community hospitals are shuttered, and care decisions are made based on insurance company criteria for admissions and discharges, including bed days of care for a specific ailment or procedure.

Winant’s book spoke to me. I was one of the mill town residents that transitioned from industry to health care and witnessed, firsthand, smaller hospitals being swallowed up and closed. I watched the commodification of care and the decay of neighborhoods that bred despair.

For a detailed, insightful, and comprehensive account, read Gabriel Winant’s, The Next Shift.