Ailí Labañino Cardoso is the daughter of one of the Cuban Five, Ramon Labañino,  still imprisoned in the US after infiltrating ant-Cuba terrorist groups in Miami.

The men, known as the Five Heroes in their homeland, were able to forewarn authorities in Cuba about terror attacks from the ruthless expatriate groups in spite of the US administration’s unwillingness to assist. The Five were taken into custody on September 12, 1998, accused of espionage and other politically-motivated charges and subjected to a very flawed trial. It took place in the toxic anti-Cuba atmosphere created in Miami by anti-Communist mafia groups. Appeals have been dismissed and a media blackout kept over the injustice. Aili’s meeting with 200 plus construction workers took place at the Mirvac Old Treasury building site located in Perth CBD.

Two of the Five have completed their long sentences and returned to their families but Antonio Guerrero, Gerardo Hernández and Ramón Labañino remain in separate US prisons. The CFMEU and the MUA recently sponsored a tour with the support of the Australia Cuba Friendship Society by Ailí Labañino, daughter of Ramón, to six Australian cities to raise awareness of the case of the Cuban Five and to help build vital international solidarity. In Adelaide, she spoke with Bob Briton of the Guardian of Australia.

Bob Briton: What has it been like to have your father imprisoned in such unjust circumstances? What was it like growing up with that loss of contact?

Ailí Labañino Cardoso: More than half of my life, as well as that of my sisters, has been spent in this battle for the return of my father. We are very proud to know what they did was not only for their families but for all Cubans. Anyway, it’s very painful not to have them, for instance at birthday parties, on Valentine’s Day, on Fathers’ Day and also the fact that we had to wait for a US visa in order to be able to visit him in prison. The experience we had during our adolescence was that of prison.

BB: How have you felt the solidarity of the Cuban people with the Cuban Five?

ALC: From the very beginning, our leaders as well as the Cuban people have been the main protagonists in this campaign for the freedom of the Cuban Five. You can see throughout the whole of Cuba posters of the Cuban Five and different activities carried out in support of them. There is a slogan among the Pioneers [the youth organisation for very young Cubans] that “We want to be like Ché”. Now, along with that slogan they say “We want to be like the Five”. This battle is very sensitive in Cuba because the Five are considered as family by all Cubans.

BB: How important has international solidarity been in the case?

ALC: Truly, international solidarity is vital in this battle. Cuba’s efforts are reaching the world through the efforts of our friends in the world. If the mass media in the US has been able to raise a wall of silence about the injustice, international solidarity has been able to open doors in alternative media to let the case be known. The first time Fidel spoke to a gathering about this issue, one of the things he said was “They will be back but only when everybody in the world knows about the case.”

BB: Has the release of two of the Heroes encouraged people in Cuba?

ALC: Unfortunately, while we are happy they are free now, they are free because they completed their whole sentence. So we won’t have this same thing happening to the rest of the Five until 2017 in the case of Antonio, 2024 in the case of my father Ramón and, in the case of Gerardo, seeing he has a sentence of two life sentences plus 15 years, he has no date set for his release. Anyway, for the family, for the whole Cuban people and all of our friends it is a cause for happiness and reassurance that two of them are free already. René and, later, Fernando have both said they will never feel free as long as the other three remain in prison. That’s why we will continue to call them the “Five” until the last one has returned to Cuba. René and Fernando are now leaders of the national and international campaign for the freedom of the other three.

BB: You mentioned the Pioneers but how have the youth of Cuba responded?

ALC: The fact that the youth are proud of what the Five are doing and that they want to be part of this battle is a big support to us. In every university in Cuba there are committees in support of the Five. In our universities there are not only Cubans; there’s a large number of foreign students studying alongside their Cuban counterparts. This has the advantage that, once the international students return home, they take the message about the Cuban Five to their respective countries. I study engineering at a university in Cuba. At this university there is a project called the “House of the Five” so that, every month, each of the faculties holds activities in support of the Five.

When I was at university, I participated in these activities and it’s very nice to see how young people get together for this cause. We are aware that we are the future but we always take into account the experience of the people who preceded us. Our organisation, the Communist youth organisation called the Young Communist League is very active in these activities. When the Cuban Five were younger, they were members of the Young Communist League and now their sons, daughters and nieces and nephews are also members. We are very proud to take part in the Congress of the Youth, which will take place next year in Cuba. Of course, to all the national and international congresses held in Cuba we will take the voice of the Five. Our challenge is to reach the youth of other countries to give them the message of the Cuban Five.

BB: What has your reception been like in Australia and how would you rate the level of awareness of the Australian people of issues like the Five and the Blockade [the US-led blockade on economic, scientific, cultural and diplomatic exchange with Cuba]?

ALC: First of all, I would like to extend my thanks to the Australian trade unions. They were the ones who financed my tour through six cities in Australia. Unfortunately, as in many other countries in the world, not a lot is known about the case of the Five. But this is not the fault of Australians or the friends of Cuba living here. We are convinced the unions and others who know about the case are working very hard around it.

The main problem is that the mass media have silenced the case. That is why we have to knock on every door we can to take the message to every person. I can tell you the friends we have found here are sincere. The things they have undertaken to do, for example to write letters and postcards to the Obama Administration for the freedom of the Five, will be done. The people we have met have fathers, spouses, sons and daughters and I know they wouldn’t like to endure the sort of situation I am suffering. Gerardo, in one the letters he sent to the international solidarity movement, said “As long as there is just one person fighting for my cause and the cause of my brothers, we will remain strong inside these prisons.”

In letting people here in Australia know about the case, as a daughter and member of the family of one of the Five, I am taking another step towards the day when they will return to Cuba. That is why we can say it is a success when we can let even just one person know about the case. 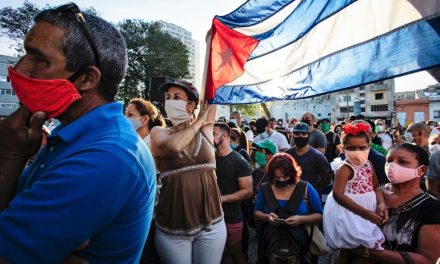 The Letters to Saddam Hussein