China released a report titled “The Record of Human Rights Violations in the United States in 2019” prepared by the State Council Information Office. It focused attention on income inequality, racism, gender discrimination, gun violence, cruelty to migrants, imperialism through propaganda, sanctions, and war.

This is a summary of the report made by the twitter account “Defend the PRC” (@defendchina). The report can be read in full here.

“We lied, we cheated, we stole … It reminds you of the glory of the American experiment,” said US Secretary of State Mike Pompeo in a speech on April 15, 2019.

“The remarks of US politicians have completely exposed their hypocrisy in adopting double standards on human rights issues and using them to maintain hegemony.”

This report is based on a variety of published data, reports and research findings. The facts detailed in the report prove that in recent years, especially since 2019, the human rights situation in the United States has been poor and deteriorating.

Finally the report touches the human right implications of the US government policy of sanctions towards other countries and made a special mention of sanctions on Venezuela and Cuba:

Unilateral sanctions grossly infringed on human rights in other countries. According to a report on the UN website on Nov 7, 2019, for the 28th consecutive year, the UN General Assembly had adopted a resolution calling for an end to the economic, commercial and financial embargo imposed by the United States against Cuba. According to a report by the United Nations on May 28, 2019 titled “Necessity of ending the economic, commercial and financial embargo imposed by the United States of America against Cuba,” the economic and commercial embargo in almost six decades was a massive, flagrant and systematic violation of the human rights of all Cubans. The report said it is imperative that the government of the United States comply with the resolutions adopted by the international community in the General Assembly and unconditionally end its embargo policy against Cuba. In a statement published by the UN website on Aug 8, 2019, High Commissioner for Human Rights Michelle Bachelet pointed out that the unilateral sanctions imposed by the United States on Venezuela would have far-reaching implications on the rights to health and to food in a country where there were already serious shortages of essential goods.

This article first appeared  in the Orinoco Tribune 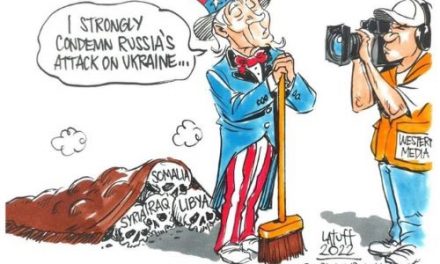