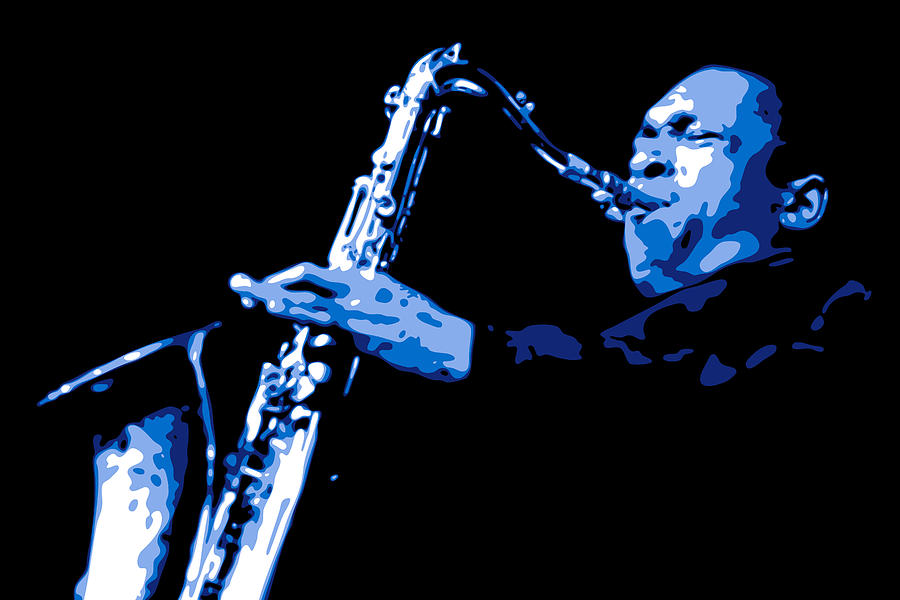 John Coltrane died fifty years ago this past July. In 1967, his death, like his music, passed largely unnoticed by most people. Today, his name is part of music lore in the same way that Louis Armstrong and Charlie Parker are recognized by even those who haven’t heard more than a few notes of their music. But in the 1960s, Coltrane’s music was almost never heard on commercial radio or television, seldom offered on public air waves, and known by only a coterie of extremely passionate followers.

I was part of that group of devoted travelers on the Coltrane journey.  His death hit me harder than the loss of almost anyone but my closest friends and relatives. His music shaped my sensibilities perhaps as much as anything in my formative years. Coltrane had that effect on many of his most committed followers. Were we a cult? Perhaps. But I would prefer to believe we were the fortunate few who had his music as an emotional, social, and intellectual influence, a powerful force shaping our worldview.

The Music
By the mid-1950s, Coltrane had risen to some prominence as a leading voice on tenor saxophone in African American improvisational music. Many saw Sonny Rollins, an extraordinarily lyrical player, as the only tenor rival among the generation of players spawned by the Bebop movement. Coltrane’s more harmonically complex, urgent, and multi-note style could be seen as the culmination of the sophisticated innovators of New York-centered musicians like C. Parker and J. B. Gillespie of the 1940s. This mid-1950s current was often characterized as “Hard Bop.”

Coltrane’s work with Miles Davis and Thelonious Monk further shaped his music, particularly Monk’s unconventionality and jarring dissonances. Coltrane’s final collaborations with Davis, as exemplified by the monumental Milestones recording, began to free him from the now confining Hard Bop strictures. At the same time, Coltrane’s departure from Hard Hop, his assumption of leadership of his own group, and his search for a new approach brought intense interest and critical controversy in the so-called “jazz” community.

The jazz community occupied a unique niche in US cultural life. Never part of the popular music mainstream, except as an ersatz white imitation in the time of institutionalized racial segregation, African American improvisational music nonetheless captured the attention of bohemian artists and intellectuals. Its outré status only made it more appealing to them.

The left of the 1930s and 1940s embraced the music as well. Its stature as a unique product of the Black experience fit well with the left’s fight for racial justice. The embrace was reciprocated by musicians attracted to the left’s – particularly the Communist left’s – commitment to the fight against racism. Some musicians of the era were Communists, many were close to the Communists, or supporters of the Communists.

With the Cold War repression of Communism, labor, and the left, jazz became for some the expression of rebelliousness and the rejection of US values without challenging the fundamentals of capitalist economic relations and the skewed power relations that ensue. 1950s writers, ranging from Jack Kerouac to Norman Mailer, found coded subversion in the modern jazz of the time: as “outlaw” music, jazz escaped the fear-driven cultural conformity of the 1950s. (Popular, mass-appeal, urban rhythm and blues enjoyed a somewhat similar status at the time, but because of its growing broad appeal, it was swiftly sanitized into insipid rock and roll.)

It was near the end of the most extreme period of anti-Communist hysteria, the closing days of McCarthyism, the waning of thoughtless conformity, when Coltrane found his voice. Even more significantly, Coltrane set out on his journey while the social unrest of the civil rights movement reached a boiling point with demonstrations, sit-ins, voter registration, and freedom rides. It was at this time that he began to press harmonic boundaries, solo length and form, and rely more upon vocal effects in his music.

While this period of Coltrane’s development is often associated with the formation of his “classical” quartet, it is really the collaboration with alto saxophone/bass and clarinet/flute player Eric Dolphy in the latter half of 1961 that propelled Coltrane forward on the sonic searches of the next six years. The last Atlantic recording Olé, especially the title composition with its references to El Quinto Regimiento, and the live Village Vanguard sessions exhibit the taut, urgent, intense-energy playing that characterized all of Coltrane’s subsequent music except for balladic or elegiac works. Dolphy’s icy, rhythmically accented, speech-like voice goaded Coltrane beyond his clean, pure tone and to more guttural, extra-musical effects and edgy solos.

Just as the civil rights movement was pressing the limits of liberal tolerance in the early 1960s, the music of John Coltrane was distressing the staid ears of many in the jazz establishment, particularly some of the Downbeat critics who saw the Coltrane/Dolphy collaboration as “anti-jazz.”
With the support of ABC-Paramount/Impulse Record’s Bob Thiele, Coltrane was able to continue his quest over the next five-plus years, pressing further and further into uncharted musical territory. There were occasional pauses around more conventional material (ballads, Johnny Hartman, Duke Ellington). Whether the pauses were moments of respite or imposed by the record company for commercial reasons is unimportant – the journey continued.

The 1965 record release, A Love Supreme, is considered by many to be both Coltrane’s most complete, satisfying work and a definitive statement of his overarching spiritual commitment. It certainly was uncommonly popular. Its accessibility is owed to its more restrained religiosity, its reverence. The intensity is there, but contained by a purposeful piety.

But it was only a brief summation before a return to exploration. Months after the A Love Supreme release, Coltrane appeared at the first-and-only Downbeat Jazz Festival in Chicago (my first-and-only experience of Coltrane live), performing with the fiery tenor saxophonist Archie Shepp. An audience expecting to hear the reassuring chants and soaring, but contained cries of A Love Supreme were sorely disappointed. Coltrane was off on further adventures; more than a few boos could be heard.

The remaining two years of Coltrane’s life continued the journey. The music was exciting, but challenging to those willing to invest and listen carefully. Coltrane’s generous promotion of less well-known musicians was commendable, but often came at a cost. The young tenor saxophone player, Pharoah Sanders, brought piercing, dramatic effects to the music that, over time, grew shallow and repetitive. And while replacement Rashied Ali was a superb “free” drummer, he never seemed to create the sonic tension that the inimitable Elvin Jones did with Coltrane. All great music trades on emotional tension and release; Jones and Coltrane achieved that collectively more than any other musicians of the era.

Similarly, pianist McCoy Tyner of the “classical” quartet owned a powerful left hand that provided the harmonic bottom, the complex, percussive figures that, with Jones’ pressing drums, propelled Coltrane’s exploitations. His replacement by the earnest Alice Coltrane added color, but lost propulsion. But Coltrane’s last phase remains a study in change and risks. The music was always unsettled and unsettling.

The Meaning of Coltrane
John Coltrane’s music was revolutionary. Not in the sense that it delivered an overtly revolutionary message, but in the sense that it reflected a time of substantial social change, an era of revolutionary ferment and possibility. Because instrumental music is non-propositional, absent a coherent message, it can only be revolutionary in an emotional sense. And it was the emotions of the time that Coltrane’s music captures and conveys, in much of the way that some of Beethoven’s music captures and reflects emotionally his hopes and perceptions of the early nineteenth-century social changes.

Certainly, some of his song titles reveal that Coltrane was in touch with the liberating currents of his time. References to Africa and its new-found freedom abound in these original titles: Liberia, Africa, and Dahomey Dance. And awareness of the Black liberation struggle is evidenced by Song of the Underground Railroad, Reverend King and the poignant response to the Birmingham bombing, Alabama.

It does not diminish Coltrane’s revolutionary character to note the consciously and explicitly nationalist, Marxist-influenced work of a contemporary artist like Archie Shepp, especially since it was Coltrane’s sponsorship that launched Shepp before a larger audience.

Coltrane challenged the bar, cabaret, club “ghetto” to which African American music had been relegated. Unlike “serious” music, Black music was demeaned as an accompaniment to drinking, dancing, and conversation. Earlier, musicians had sought to challenge this image, but none as successfully as Coltrane. His lengthy solos, studies in complexity and demanding intense concentration from his audience, effectively killed the drink-selling business and transformed appearances into concerts. His music began to substantially change the material status of African American performers from that of entertainers to that of artists.

Other jazz musicians evolved or drew upon other genres to refresh their music – Caribbean music, African music, Brazilian music, rock, klezmer, etc. Coltrane did as well. But no one persistently and intensely pressed beyond the boundaries of convention and tradition as did Coltrane; he relentlessly sought the “new.” Anything seemed possible. His journey carefully tracked the moment. In the early 1960s, with McCarthyism receding, and enduring institutional segregation under assault, everything seemed possible to a young generation in the US.  Of course, that sense of the possible was dashed in the closing years of the decade by war, assassination, and violent repression. Arguably, it has never been recovered.

Coltrane’s performing demeanor, absent the banter or clowning expected of jazz musicians, his professionalism, and his intensity of purpose addressed stigmas of class and race. African American music as presented by Coltrane, and by others who followed, established the music as more than “race” entertainment for the masses. His music reflected and reinforced the growing self-confidence and self-esteem of Black people in the US.

It would be a mistake to see Coltrane as a leader of the movements of his time, as an indispensable spark for change. Vulgar Marxists like Frank Kofsky tried to portray him in just this way, as a Black nationalist icon. Coltrane politely rejected this characterization without rejecting the politics of Black liberation or its various leaders.

Instead, we should see the Coltrane phenomenon as a reflection of the promising politics of the time. Thoughtful jazz writers like Marxists Sydney Finkelstein and ‘Francis Newton’ (Eric Hobsbawn) pioneered the study of the music through the perspectives of class, race, and historical moment, as did a later-generation writer, Black nationalist-turned-Marxist Leroi Jones/Amiri Baraka. They interpreted the Blues, early jazz, Swing, and Bebop as the product of the conjunction of race relations, class divisions, and the historical conditions informing artistic production.

We should see Coltrane’s quest for freedom from the social, economic, and musical strictures that he had inherited as a similar product, a product of a time when Black and white people in the US believed with fervor that they were on a quest for a different, more just world.  Sadly, in the US, we have struggled to return to that quest and our largely decadent culture reflects that fact.

Greg Godels has also written under the pen name of Zoltan Zigedy.