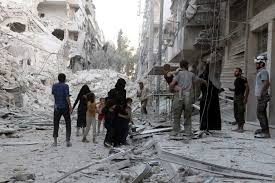 We, the undersigned communist and workers parties meeting in Hanoi, Vietnam, during the 18th International Meeting of Communist and Workers Parties,  strongly believe that the policies and actions of the imperialist powers and their reactionary allies have created an unprecedented political, social and humanitarian catastrophe in the Middle East.

The region is currently going through a major crisis of war and destruction. It has been the focus of carefully orchestrated attempts by US-led imperialism to consolidate its hegemony and to ensure unrivalled control of the flow of oil, the ability to freely plunder the region’s resources and to exploit its markets.

We are concerned that if the current situation continues, the Middle East has only a future of further wars, destabilisation and imperialist domination to look forward to.  Wars and terror in Syria, Iraq, Yemen, Libya and Afghanistan, the ongoing occupation of Palestine by Israel, as well as political crises in Lebanon and Egypt have scarred the face of the region.

The real beneficiary of the current situation is imperialism and its plans for continued economic, political and geostrategic domination.The US and EU powers are considering altering the existing borders of Syria and Iraq and creating new statelets in their place based along ethnic and sectarian fault lines. The New Middle East Plan is speedily taking shape. Currently there are a number of countries, some legitimately invited by the Syrian government, and others in direct contravention of the UN Charter that are militarily involved in the conflict in Syria.

We are concerned that the conflict in Syria could develop into a large-scale military conflict enveloping the region. From the outset of the crisis in Syria, we have stated that this conflict has no military solution and hence we have advocated a negotiated settlement in Syria respecting the independence and territorial integrity of the country and opposing every manifestation of direct or indirect foreign interference against the national sovereignty of the Syrian state.

We believe that without the people’s struggle and mass solidarity campaigns for peaceful resolution of existing conflicts in the region and in defence of the peoples, the tragedies will only continue to grow. The only victim will be the working people and the poor who have no other option but to take desperate measures in order to survive. In their desperate attempts to flee war and terrorism they have been forced to leave their homes and livelihood behind in a quest to find a place of safety.

We call for the immediate return of all key players in this crisis to negotiations based on the provisions of the UN Charter. There must be no place for any terrorist organization at the table, and the support, financing and arming of the terrorist organisations must be condemned and immediately stopped. The future of Syria and its government should be decided by the Syrian people alone with own free will,and the removal of Bashar al-Assad and the government should not be a precondition for an end to violence and a lasting peace.

We pledge to continue to do the following:

Mobilise the widest possible forces against the ongoing interference and aggression of imperialism in the region,
Mobilise our movements to disengage with apartheid Israel and pledge varied solidarity with the struggle of the Palestinian people,
Mobilise and organize mass demonstrations and marches for world peace and particularly for genuine peace in the region,
Mobilise against sale of weapons of war to apartheid Israel,
Organise seminars and other public fora to back the struggle for peace in the region.