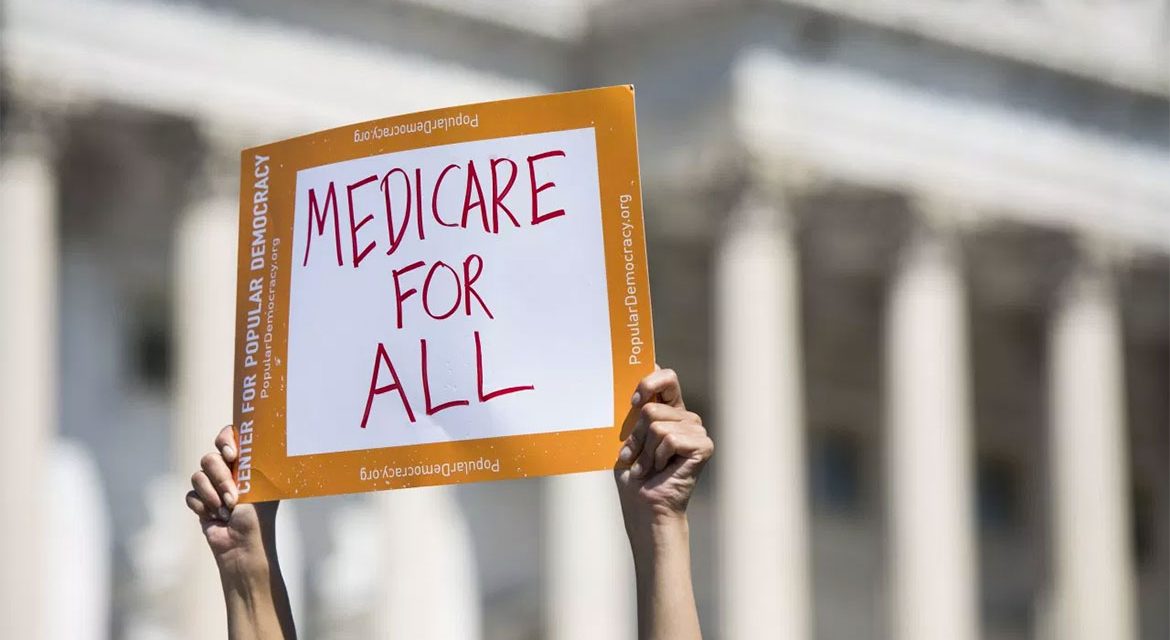 The Democratic Party won a majority in the House of Representatives in the November 2018 elections by making health care one of its top “messages.” Yet events from Bernie Sanders’ bill of 2017 to legislation that “progressive” Representative Pramila Jayapal introduced on February 27, 2019 show that the Party is on its way to destroy Medicare.

For decades activists identified the prize as “single payer health care.” The program would issue a Medicare card to everyone, like the one senior citizens get now. The card would be good at any doctor’s office, clinic, hospital, laboratory, and prescription pharmacy. These largely private businesses would be reimbursed from a public single-payer fund. The fund would receive broadly collected tax revenues; the patient would pay little or nothing at the reception desk, and no monthly premium. This is guaranteed, comprehensive health care.

In other words, single payer is Medicare for all, carried to completion by eliminating Part B premiums and by more comprehensive coverage including prescribed drugs.

Health care activists always agonized over the colorless name “single payer.” A few years ago many of them began to speak of Improved Medicare for All. Actually, it had been in the title of the benchmark bill, H.R. 676, when congressperson John Conyers introduced it in 2003. A few years later he shortened the title to The Expanded and Improved Medicare for All Act. The text remained stable, and although the bill went nowhere in Congressional committees, H.R. 676 became the centerpiece of organizing. It is readable, only thirty pages of double-spaced large type. Hundreds of trade union locals and councils endorsed this model legislation in a steady stream year after year.

The health care industry has enjoyed a long-term phase of expansion, like railroads in the latter half of the nineteenth century. Back then, the new way of moving heavy goods and people was amazing and useful; today, new biological and biochemical understanding makes possible longer life, survival from a heart attack, restored clarity of vision, and so on. In both situations, capital has had strong pricing power and taken fat profits. And just as anger at railroads swelled into a populist revolt against The Octopus (Frank Norris’ novel about the Southern Pacific railroad corporation), people today are angry at insurance corporations, pharmaceutical monopolies, and hospitals, whether or not they call themselves “non-profit.”1

Opinion polls measure growing support for single payer health care for all. Employers continue to raise the employee cost of coverage, or simply not provide a health benefit. Health insurance purchased individually on the so-called exchanges of the Affordable Care Act (“Obamacare”) turns out to be full of exceptions like a slice of Swiss cheese.

Sanders Promotes Health Care for All Then Undercuts Conyers

Popular support erupted into a political force when Bernie Sanders launched his presidential campaign at the end of April 2015. Record-breaking crowds filled his rallies around the country. The top three issues in a Sanders speech rotated – sometimes including inequality of wealth and income, sometimes climate change – but he always revved up on health care for all. It had been the cause of a few thousand health care activists. Now Improved Medicare for All became a challenge to the neoliberal establishment. For the first time in forty years, people were on the verge of a mass campaign for a major gain in their quality of life and their security.

It did not happen. Sanders did not win the Democratic presidential  nomination. He returned to the Senate, making an implicit or private deal with the party: he would speak as a independent progressive, but he will act on all serious matters as an unannounced Democrat.

Doing something about health care for people largely fell out of public view. Health care activists carried on. Policy aficionados spun proposals. Sanders had used the issue in his campaign, but sustained mass organizing for it did not happen.

Then in September 2017, senator Sanders introduced his “Medicare for All Act.” S. 1804 is three times as long as H.R. 676, and the reader must unravel cross-references within the text. Sanders made no mention of Conyers’ H.R. 676 at his press conference. Since then, no one has asked him the obvious question: Why didn’t Sanders simply introduce the text of H.R. 676 in the Senate?

Sanders’ bill would actually undermine Medicare. It would set up a “Transitional Medicare Buy-in Option and Transitional Public Option.” Sanders portrayed it as a four-year period (longer if necessary) to bring people of age 55 or over into Medicare, then down to age 45, then down to age 35, then everyone. This scheme is the very opposite of guaranteed single-payer health care for all.

How is Medicare financed today? Most of the money comes from payroll and income tax revenues, not enrollees’ Part B premiums, by a ratio of 3½ to one.2We all pay into Medicare. At the moment when someone needs care, she gets it, period – without financial worry. That is the single-payer principle, and Medicare implements it, although not entirely, since enrollees must keep up-to-date on their Part B monthly premiums, and there are some co-payments for services.

Expanded and Improved Medicare for All would eliminate premiums and co-pays. That is what H.R. 676 declared, but in Sanders’ S. 1804 people younger than 65 could “join” Medicare by paying fat monthly premiums (a “buy-in”). People who want to sign up this way would use the notorious Obamacare exchanges.

Unlike HR 676, S 1804 inserts supposedly incremental steps of public options and Medicare buy-ins for four years prior to arriving at a real single payer plan. Because S 1804 expands care while maintaining the private insurance companies, costs will skyrocket before the savings of single payer kick in. The incremental steps will become a roadblock rather than a path to single payer. Perhaps the worst part of this inclusion of the public option and the Medicare buy-in is the reinforcement of the false notion that there should or must be transitional steps to single payer. Neither the public option nor the Medicare by-in are based on sound policy. To place them in the bill for even a short period of time endangers the single payer goal.

It is a neat trick: under the guise of expanding Medicare, you make it more dependent on premiums. You change it from a public good, like the neighborhood fire station, into a commodity insurance product that individuals buy. You make health care dependent on the patient’s finances.

This perversion of Medicare is not only a fraud upon people of age 55, 45, or 35. It is a threat to Medicare itself. Whenever Medicare seems headed for a financial crunch, real or conjured, the pressure in Congress will be to shift more and more toward a premium- and co-pay-financed program rather than one supported by general and progressive tax revenues – and to take chunks of medicine out of Medicare.

An independent in name but a Democrat, in fact, senator Sanders at his press conference happily introduced several corporate Democrat co-sponsors of his bill. Behind closed doors he had let them write sections of S. 1804! The public option section was written by senator Kirsten Gillibrand of New York. “One part of the bill that I worked with my colleagues to put in was the ability for every American to buy into a nonprofit public option as part of a four-year transition…,” she said during the news conference introducing the bill.

A public option is a competition with insurance corporations rigged in their favor. They know how to repel potential enrollees who are likely to need expensive care. A government health plan cannot and, of course, should not play that game. It can either raise premiums, or it can turn the program into something like its poor cousin Medicaid. Either way, it cannot become improved Medicare for all.

Two important bills stood in contradiction to each other: one for Expanded and Improved Medicare for All (H.R. 676), the other a threat to Medicare itself (S. 1804). Conyers’ bill has been the acknowledged model legislation since 2003; Sanders introduced his in 2017.

But words do not move on their own. The corporate Democratic Party soon put H.R. 676 on the chopping block. Representative John Conyers was pushed out of Congress in a #MeToo incident, resigning from a hospital bed, denying the charges but not up to the rigor of a fair hearing if he could get one.

Somehow, sponsorship of H.R. 676 went to new congressperson Pramila Jayapal. 3 She immediately announced that she was in consultations to rewrite it. In the meantime, she surrendered the number 676 that had been reserved for Conyers’ bill since 2003. It was issued to military legislation on January 17, 2019.

After the Democrats won control of the House of Representatives in the November 2018 elections, it became more urgent for them to gut single payer health care for all. Otherwise, they might have to deliver. Representative Nancy Pelosi, during a post-election whirlwind of bargaining to make sure she became Speaker of the House, agreed to help advance the same scheme that senators Sanders and Gillibrand had put into S. 1804: a buy-in to a premium-based option for people age 50 to 64. Jayapal, who also praised Pelosi during her run for Speaker, spoke out of both sides of her mouth. “I would prefer to have a reduction of the age of Medicare so that more people could qualify but not a buy-in, because that continues the problems that we have right now.” She said lowering the eligibility age “would be an appropriate way to go where we’re taking a step forward towards a system that will ultimately cover everybody.”

Representative Jayapal introduced H.R. 1384, her replacement for the Conyers’ model, on February 27, 2019. The 119-page bill is a masterful card trick. On one hand, it maintains the ban on premiums and co-payments, and it specifies a broad list of covered medical services, including some never proposed before in such legislation.

On the other hand, Jayapal copied Sanders’ big step backward – an optional “buy-in” transition period with premiums, only shortened from his four years to two. (After the first year, minors up to age 18 and people 55 and older would move automatically into the new system.) H.R. 1384 states:

The Administrator shall determine the premium amount for enrolling in the Medicare Transition buy-in, which may vary according to family or individual coverage, age, and tobacco status,… (H.R. 1384, Title X, Subtitle A, Sec. 1002 (e)(A))

Since Conyers introduced H.R. 676 in 2003, his bill never had a premium-based buy-in. Why does Rep. Jayapal think a buy-in period is necessary?

With a buy-in transition, the first experience people would have with the new system would be yet another commodity insurance plan with monthly premiums. This is a recipe for political failure. During those two years the tentative new system would soon be under attack as financially unworkable and just not popular enough.

People could buy in if they wished as individuals through the notorious Affordable Care Act exchanges (“Obamacare”). Because of the extensive benefits, the plan would be one of the most costly choices. Unaffordable for most as an individual premium plan, trying to compete in an unreformed health care system with its bloated costs, the buy-in would attract few enrollees. Enemies of genuine universal health care will pounce on the result, demanding that genuine Medicare for All be postponed and turned into a supplement of one kind or another to corporate health insurance.

Only H.R. 676 delivers guaranteed healthcare for all, the equal care for all of which our advanced society is capable. Bernie Sanders and Pramila Jayapal, just like openly corporate yet arguably less devious Democrats, cower before insurance capital, pharmaceutical capital, hospital capital, etc. These parasites demand that healthcare be a set of commodities that some can afford and others cannot. The people or the dollar – that is the inescapable choice.

This article was first posted at Dissident Voice  on March 1, 2019