Cuba: Our America Has Changed, Exclusions Are No Longer Possible 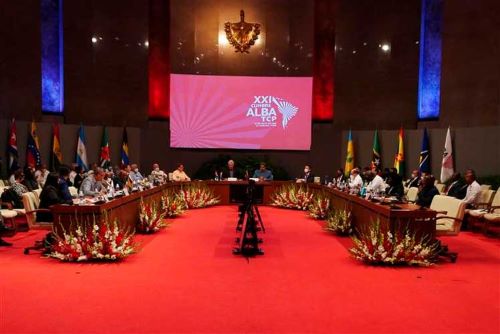 Full text of speech delivered by Cuban President Miguel Díaz-Canel, during the May 27 Summit of the Bolivarian Alliance for the Peoples of Our America, in Havana:

It is always a pleasure to receive you. I reiterate my warmest welcome to Cuba and, on behalf of the Cuban people and government, convey my gratitude for the expressions of solidarity we received from you on the occasion of the recent, unfortunate accident at the Saratoga Hotel.

Today we also remember Ambassador Vance Amory, an outstanding diplomat and statesman from Saint Kitts and Nevis, who on countless occasions accompanied us in meetings of our Alliance, and has unfortunately passed away.

Another ALBA-TCP Summit will bring us together in a few months and it is worth remembering that now, as never before, combining our efforts is imperative to build consensus and advance regional integration and joint action. These are not mere slogans; but rather a historic necessity.

As Comandante en jefe Fidel Castro Ruz said: “The ALBA created by the Bolivarian Republic of Venezuela and Cuba, inspired by the ideas of Bolívar and Martí, as an unprecedented example of revolutionary solidarity, has shown how much can be done… with peaceful cooperation.”

A Latin America and Caribbean united within our diversity, with a firm voice of our own, working together in the coordination of development strategies and the defense of sovereignty is essential. Divided, they can ignore our individual representatives. United, no one can silence us.

Just as they have not been able to break the collaboration and solidarity that has allowed countries with fewer resources to confront the hard tests of our era.

The COVID-19 pandemic has been one of the most serious challenges our nations have faced in recent years. It has strained our economies and health systems, but has also forced us to take initiative and launch new projects, in which we take pride.

In our case, the work of our dedicated health personnel and Cuban scientists, heroes and heroines of our time – whose contributions and efforts we can only say have saved us – have proved to be more than commendable!

The advanced development and potential of Cuba’s biotechnology industry, the work and legacy of Comandante en jefe Fidel Castro Ruz, allowed us to develop and produce three anti-COVID-19 vaccines of our own, which have been highly effective.

With these vaccines, more than nine million Cubans have been administered the complete regimen of doses, representing 89.9% of the entire population and 96.7% of the eligible population, while more than seven million have received boosters, 89% of the population eligible for vaccination. We were the first country to vaccinate children two years of age and above.

This has been Cuba’s sovereign response to a pandemic that reached the country at a time when we were suffering the impact of 243 measures adopted to reinforce the criminal blockade which we have faced for 63 years without surrendering. And these measures, we will not tire of pointing out, were not lifted even at the most critical moment of the COVID-19 battle. They even denied us oxygen! But we won again, thanks to the sons and daughters, and the work, of the Cuban Revolution.

Before you today, we reiterate our willingness to put this capacity at the service of Alliance members, as has already been done in several countries with positive results.

These advances are evidence that Cuba cannot be stopped despite the extreme tightening of the blockade and the permanent political and communicational harassment of our country. Cuba will continue to resist with creativity and will continue to advance in the construction of a more just and solidary society.
Esteemed heads of delegations:

In recent weeks, several governments have publicly asserted, in an insistent and dignified manner, that the legitimate, historic demand of the region be met to convene all the hemisphere’s countries to summits of the Americas, without exception.

The United States, maintaining its hegemonic, anti-democratic practices, with no type of justification whatsoever, intends to ignore and silence this just demand, going so far as to resort to deception.

We cannot forget that Cuba, with your support and that of the entire region, demonstrating its willingness to participate in constructive dialogue, attended for the first time this type of meeting in 2015, in Panama.

At that time, Army General Raúl Castro, then President of our country, emphasized that the creation of the Community of Latin American and Caribbean States (Celac) and the signing of the Proclamation of Latin America and the Caribbean as a Zone of Peace demonstrated that “we can move toward unity and the achievement of common goals within the framework of our diversity.”

Taking advantage of its status as host of the IX Summit of the Americas, the United States seeks to adopt interventionist documents and concepts, without considering the opinions of all and excluding countries that have much to contribute regarding the event’s central issues. We have learned that they encountered vigorous opposition to these efforts.

This practice of exclusion is not new and confirms the intention of the United States to control the inter-American system, to advance its hegemonic objectives and act as the arbitrator of democracy.

They have no such a right, neither politically or morally.
They claim to be promoters of democracy, which they deliberately equate with their system, but they are not capable of providing a plural space. They pretend to be interested in a constructive relationship with our region, but they disrespect our differences.

Thus, in the name of democracy, the government of the United States ignores, once again, the demand for a truly hemispheric summit, with all countries that inhabit the continent.

The character of hemispheric relations must change. The policy of subordinating many to the mandates of one, no matter how powerful, is obsolete and unacceptable.

Our America has changed. Exclusions are no longer possible. The decision not to invite everyone is a historic step backward.
And all countries must be invited on equal terms. Attempting to decide, based omits privileged statuses host, who represents a country is disrespectful and injurious to the sovereignty of nations.

Given this attempted exclusion and selectivity, the strengthening of authentic mechanisms of Latin American and Caribbean integration and joint action is urgently needed. United we will be able to effectively defend our sovereignty and self-determination without interference or external pressure.

Also urgently needed is the continued defense of ALBA-TCP as a reference point for consensus building and a promoter of cooperative projects, which contribute to an economically and politically more independent, sovereign Latin America and Caribbean.

In this complex scenario, the right of our sister Caribbean nations to receive just, special, differentiated treatment must be respected, as essential to confronting the colossal challenges they face.

We call for unity, not division; to add, not to subtract; to dialogue, not to confront; to respect, not to impose.
These are times to defend Our America, with determination and dignity, the America José Martí captured so beautifully in words. It is time to construct “a single homeland” as Bolívar dreamed, and preserve the dignity of our lands, in honor of the heroes and founding fathers of Latin America and the Caribbean.

“This is a time of reunion, of marching united, in tight ranks, like the silver in the bedrock of the Andes,” Martí wrote more than a century ago. This time continues.

History will judge us based on how much we are able to advance toward these ends, on which the very survival of our Latin American and Caribbean identities depends today.

Thank you very much (Applause).

U.S. Aggression & Propaganda Against Cuba: Why the Unrelieved U.S. Antagonism Toward Cuba?

Matt Lawrence and Brothers to the Rescue, to the back of the class!