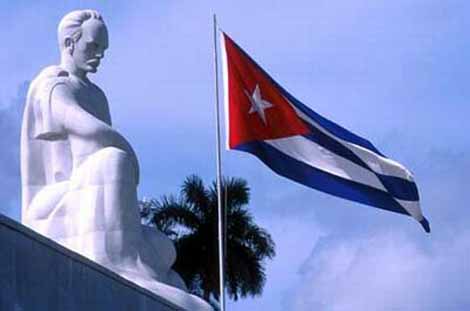 The Cuban News Agency reproduces the full text of the Declaration of the Revolutionary Government of Cuba:

Havana, Cuba, (ACN) The Cuban Revolutionary Government reiterated that it will resist any US attempt to overthrow the Revolution, in the wake of the escalation of the aggressiveness of the Trump Administration.

Today April 17 marks the anniversary of the beginning of the military aggression of Playa Girón in 1961. The decisive response of the Cuban people in defense of the Revolution and Socialism led, in just 72 hours, to the first military defeat of imperialism in America.

Curiously, it is the date chosen by the current U.S. government to announce the adoption of new measures of aggression against Cuba and to reinforce the application of the Monroe Doctrine.

The Revolutionary Government rejects in the strongest terms the decision to allow, from now on, action to be taken in U.S. courts against Cuban and foreign entities outside the jurisdiction of the United States, and the decision to tighten the impediments to the entry into the United States of officials and relatives of companies that legitimately invest in Cuba, in properties that were nationalized. These are actions contemplated in the Helms-Burton law that were rejected long ago by the international community, which the Cuban nation repudiated since its enactment and application in 1996, and whose fundamental purpose is to impose colonial tutelage on our country.

It also repudiates the decision to again limit the remittances that Cuban residents in the U.S. send to their families and relatives, to further restrict the travel of U.S. citizens to Cuba, and to apply additional financial sanctions.

It strongly rejects references to attacks on U.S. diplomats in Cuba.

They intend to justify their actions, as is customary, with lies and blackmail.

Army General Raul Castro said on April 10: “Cuba is blamed for all evils, using lies in the worst style of Nazi propaganda.

In order to hide and justify the obvious failure of the sinister coup plot to appoint a usurper “president” for Venezuela from Washington, the U.S. government turns to slander.

It accuses Cuba of being responsible for the solidity and firmness shown by the Bolivarian and Chavista governments, the people of that country and the civil-military union that defends the sovereignty of its nation. It lies shamelessly in claiming that Cuba maintains thousands of military and security personnel in Venezuela, influencing and determining what is happening in that sister nation.

It has the cynicism to blame Cuba for the economic and social situation that Venezuela faces after years of brutal economic sanctions, conceived and applied by the United States and several allies, precisely to suffocate it economically and generate suffering in the population.

Washington goes so far as to pressure third country governments to try to persuade Cuba to withdraw this supposedly implausible military and security backing, and even to stop supporting and solidarity with Venezuela.

The current U.S. government is known, in its own country and internationally, for its unscrupulous tendency to use lies as a domestic and foreign policy resource. It is a habit that agrees with the old practices of imperialism.

The images of President George W. Bush are still fresh, with the support of the current National Security Advisor John Bolton, lying indecorously about supposed weapons of mass destruction in Iraq, a fallacy that served as a pretext to invade that Middle Eastern country.

History also records the bombing of the battleship Maine in Havana and the self-inflicted incident in the Gulf of Tonkin, episodes that served as a pretext for unleashing predatory wars in Cuba and Vietnam.

We must not forget that the United States used false Cuban colors, painted on the planes that carried out the bombings in the prelude of the Playa Giron (Bay of Pigs) aggression, to hide that they were really North American.

It must be clear that the slander of the United States rests on a total and deliberate lie. Its intelligence services have more than enough evidence, surely more than any other state, to know that Cuba does not have troops or participate in military or security operations in Venezuela, although it is the sovereign right of two independent countries to determine how to cooperate in the defense sector, which is not for the U.S. to question.

The accuser maintains more than 250,000 soldiers at 800 military bases abroad, part of them in our hemisphere.

Its government also knows that, as Cuba has publicly and repeatedly declared, the nearly 20,000 Cuban collaborators, more than 60% of whom are women, carry out in that Latin American nation the same tasks that are currently being carried out by approximately 11,000 other professionals from our country in 83 nations: to contribute to the provision of basic social services, fundamentally health services, which is recognized by the international community.

It must also be absolutely clear that firm solidarity with the sister Bolivarian Republic of Venezuela is a right of Cuba as a sovereign State and is also a duty that forms part of the tradition and inalienable principles of foreign policy of the Cuban Revolution.

No threat of retaliation against Cuba, no ultimatum or blackmail by the current United States Government is going to divert the internationalist conduct of the Cuban nation, despite the devastating human and economic damage that the genocidal blockade causes to our people.

It should be remembered that the mafia threat and ultimatum were already used in the past when Cuba’s internationalist effort supported liberation movements in Africa while the United States supported the shameful Apartheid regime. It was intended that Cuba would renounce its commitments of solidarity with the African peoples in exchange for promises of forgiveness, as if the Revolution were to be forgiven by imperialism.

At that time, Cuba rejected blackmail, as it does today, with the greatest contempt.

Army General Raúl Castro recalled last April 10: “In 60 years in the face of aggressions and threats, Cubans have shown the iron will to resist and overcome the most difficult circumstances. In spite of its immense power, imperialism does not possess the capacity to break the dignity of a united people, proud of its history and of the freedom conquered through so much sacrifice.

The government of Cuba calls on all members of the international community and U.S. citizens to stop the irrational escalation and the policy of hostility and aggression of Donald Trump’s government. The Member States of the United Nations, rightly year after year, demand almost unanimously the end of this economic war. The peoples and Governments of our region must, for the benefit of all, uphold the principles of the Proclamation of Latin America and the Caribbean as a Zone of Peace.

The President of the Councils of State and Ministers Miguel Díaz-Canel Bermúdez declared on April 13: “Cuba continues to trust in its forces, in its dignity and also in the strength and dignity of other sovereign and independent nations. But it also continues to believe in the American people, in Lincoln’s homeland, who are ashamed of those who act outside the universal law in the name of the entire American nation.

Once again, Cuba repudiates lies and threats, and reiterates that its sovereignty, independence and commitment to the cause of the peoples of Latin America and the Caribbean are non-negotiable.

Two days before commemorating the 58th anniversary of the victory of Playa Girón, a historic point in the national geography where the mercenary forces driven by imperialism bit the dust of defeat, the Cuban Revolution reiterates its firm determination to confront and prevail in the face of the aggressive escalation of the United States.

The Contradictions of Amnesty International

Our Decision to Build Socialism Will Never Waver