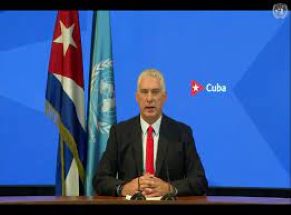 US President Joe Biden did it again. This Tuesday, he took the podium at the United Nations General Assembly to label Cuba and other progressive nations as authoritarian and inconsequential to the needs of their people in an attempt to justify the onslaught of sanctions that Washington maintains against the In his speech, he did not mention the economic and social repercussions that the blockade is having on Cuba. Nor did he say anything about the food insecurity faced by the Cuban people due to the obstacles imposed by the White House, which hinder the Caribbean country’s access to basic goods.

But the island did not remain silent. “With what morals does Biden stand up in front of everyone to humiliate Cuba? The US ran away from the swamp that its military created in Afghanistan for 20 years. And now its president pretends to get rid of the thorn of defeat by threatening Cuba and Venezuela in his cynical speech,” Cuban President Miguel Diaz-Canel wrote on Twitter.

The attack on Cuba, Venezuela, Nicaragua, Iran, and other countries which Biden is hostile to, is another attempt to score points in his favor, while his people are losing hope in any gain of popularity. This trend continues downward especially after the horrific scene this past weekend of federal agents on horses viciously attacked desperate Haitian immigrants on the Texas border; a scene reminiscent of the racist brutality that took place on slave plantations of the US south.

“What should we call his attempt to establish a single universal political model? And what should we call the blockade, which was strengthened amid the coronavirus pandemic?” questioned the Cuban head of state.

“Biden is making a serious mistake by trying to separate the world from those who do not submit to his hegemony and defend with dignity their sovereign right to self-determination,” Cuba’s Foreign Affairs Minister Bruno Rodriguez reaffirmed.

After spouting these blasphemies in New York, the White House occupant flew to Washington to attend the summit he called to create a global strategy to contain the COVID-19 pandemic. Local human rights organizations, experts, and countries friendly to Cuba question how could such cynicism be possible.

How can he call for a global meeting to halt the pandemic while the U.S. is economically suffocating other nations that are struggling alone against the disease’s upsurge?

We have to go big, the president said during the opening of the virtual event while assuring that Washington will donate 500 million Pfizer-BioNTech vaccines to low-income countries starting in January 2022. Going big? 500 million doses might seem like a lot but in the real scope of this pandemic, according to the journal Nature, is that it will take 11 billion doses to vaccinate 70% of the world’s population.

However, Biden cynically failed to mention that he will send only 300 million injections out of the total of 1.1 billion doses he promised to donate to low-income countries before next December, The New York Times explained. This revelation occurred amid world wide criticism against his administration for its weak commitment to global vaccination.

The Biden administration’s attitude reaffirms what Díaz-Canel expressed during the High-Level Meeting of the United Nations General Assembly on Wednesday.

“Six years ago, almost all the world leaders committed ourselves to leave no one behind, in the common purpose of complying by 2030 with the so-called Sustainable Development Goals. But let the truth be told: millions of human beings are still unprotected,” the Cuban leader said.

Washington does not care about the underprivileged people nor the low-income countries. We are facing a more camouflaged version of former President Donald Trump and his America First policy. For Biden, defending the policy and keeping his administration afloat in the crossfire caused by his erratic steps is stronger than logic.

In the face of this reality, Cuba does not relent in its fundamental purpose of helping the world achieve full social justice.

“We the revolutionaries are optimists and seek to find ways out of even in the worst scenarios because we believe in the human being. Building the World we dream of is a mammoth task, but it is possible if we renounce selfishness. Let’s work together to transform the current unjust international order into a more just, democratic, and equitable one, in which, finally, no one is left behind,” Díaz-Canel concluded.

Freedom for the Five in the New Year

Here, Everything is Discussed with Everyone