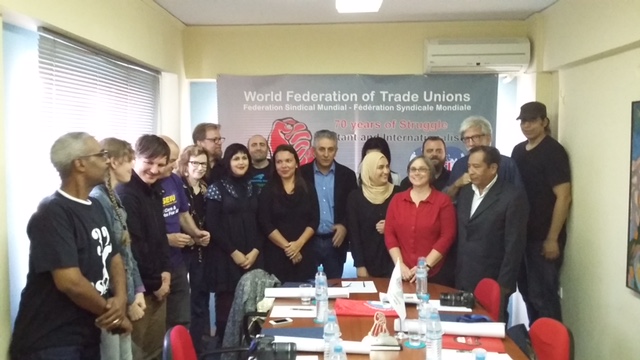 By Richard Berg
Via Fightback News

Athens, Greece – Founded in the struggle against fascism during World War II, the World Federation of Trade Unions (WFTU) continued the celebration of its 70th Anniversary by welcoming a delegation of trade union activists from the U.S. to its headquarters in Athens, Greece on Nov. 29. WFTU General Secretary George Mavrikos told the Americans that the WFTU is oriented to the working class. He spoke of how at the last WFTU Congress, the 828 delegates representing 90 million workers debated and discussed ideas of how to move the class struggle forward in the interests of working people.

“This is where the unions that really want to fight the boss come,” said AFSCME Local 3800 President Cherrene Horazuk. “The delegation here from the U.S. is eager to learn from our sisters and brothers fighting our common enemies in other parts of the world.”

General Secretary Mavrikos marked the occasion by presenting awards to the artists who had won a contest to design the WFTU 70th anniversary poster. The winner was Walter Diaz Moreno of Cuba, but Mavrikos explained how the Canadian government had refused to allow Brother Moreno to change planes in Canada because the layover would last five minutes longer than the three hour maximum established by Canada at the behest of the U. S. government.

Awards were also presented to artists from South Africa, Brazil, Bahrain and Greece. In accepting her award, Nada Naji Ali from Bahrain unfurled the banner of her labor union, ALBA, saying how proud she was of her union.

“It is an honor as an American trade unionist to be with a sister from a fighting labor organization in the Middle East,” said WFTU Representative for the U.S., Frank Goldsmith, “I congratulate all the winners, but I especially congratulate the WFTU and all its affiliated unions on 70 years of class struggle unions.”

In the coming days the delegation from the U.S. will meet with union leaders from Peru, Vietnam, Palestine, Cyprus and Greece. The delegation is also looking forward to observing and learning from the upcoming general strike against austerity planned by the Greek WFTU-affiliated union PAME (All Worked Militant Front) on Dec. 3.