A delusion is a belief held with strong conviction despite superior evidence to the contrary. A false belief or opinion: labored under the delusion that success was at hand.

A recent article in the Washington Post dated January 31, 2014, Union officials say Obama betrayed them in healthcare rollout, reports a broad sense of disappointment among union officials that the Obama Administration is ignoring previous promises to them regarding how the ACA treats union negotiated health care funds.

Their main complaint is that regulations implementing the ACA have treated Taft Hartley benefit funds unfairly by imposing additional fees and not letting them enjoy the subsidies that insurance plans are able to receive through the ACA. They assert that unless changed, the ACA will have union negotiated benefit funds being forced to pay fees that will help subsidize the costs of commercial insurance plans.

According to these leaders, this healthcare “betrayal”, by Obama, will make it harder to garner rank and file support for Democrats in the upcoming elections.  This lame and totally ineffectual response to the latest “betrayal” by the Obama administration is unfortunately typical of the mainstream leaders of labor today.

Incredulously, they refuse to acknowledge or accept any responsibility for the ACA even though they were intimately involved in its creation every step of the way. Millions of dues dollars were spent to lobby for its passage and all publicly campaigned for it.

What’s pathetic is that these same leaders had not the political courage or vision to expose the ACA as a gift to the for profit health care industry which will continue to control the delivery of health care in the US, which is the real cause of our health care misery. The ACA is monstrously complex and confusing.  Why? Basically it’s inherent in its DNA which was to provide “insurance” through a myriad of commercial for profit “providers” as its first goal.

Instead of educating their own members on the wasteful “for profit” healthcare industry, these leaders deluded themselves that they had a “seat at the table” (more like a child’s chair) and ignored the reality that the whole ACA legislation was initiated to first please insurance companies, not provide healthcare.
Instead of mobilizing the significant support that existed in their own ranks and the general public for a Medicare for All Solution, they deluded themselves into thinking that by removing single payer from the health care debate that their voices would be heard by the Obama administration and his insurance company handlers who drafted the bill.

Now, they, their members and the general public are stuck with an enormously complex sub standard “insurance” product that only a fool could have not seen from the beginning to its current “roll out.”

Getting scorned by the Democrats has gotten these guys really mad and their solution is to add further insult to injury. They again delude themselves into thinking that by supporting Republicans, they can gain support for labors cause!

This same article reports that the the Laborers International Union has given $300,000 to the Republican Governors Association and Defending Main Street, a super-political action committee aligned with the Washington-based Republican Main Street Partnership, received more than 90 percent of its $845,000 in donations last year from labor groups, according to reports filed with the Federal Election Commission.

Such are the machinations of our “business oriented” trade union mis leaders who have not found the courage to publicly fight for a public works jobs program, Medicare for All, raising the minimum wage or spend a dime to protect Social Security.

They have not thought it important to expose the gross economic inequalities that have developed under policies initiated by this Administration and supported by Congress where 40% of the population lives paycheck to paycheck.

Yes, the rich have gotten richer faster under Obama than any other President and the economic condition of Afro Americans and other minorities is worse than under Bush.

Also conveniently forgotten by these “leaders” is that one in seven Americans is now eligible for food stamps, that both parties just voted to cut unemployment compensation benefits, and real wages continue to stagnate.

These and many more “betrayals” by Obama, the Democrats and Republicans have fallen on deaf ears by AFL-CIO top leaders.

What the labor movement desperately really needs is a fighting leadership that will stand up to the one sided class war now being waged by corporate America and its political supporters in both major parties.
Workers deserve leaders that have a popular program based on struggle not capitulation and compromise; one that will harness the untapped anger and militancy now brewing below the surface in America.

These misleaders are driving labor into the proverbial black hole, going nowhere.

A change of direction is sorely needed. 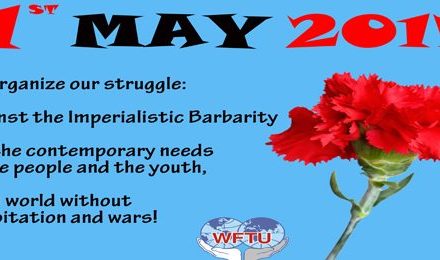 WFTU Statement on May Day 2017