Reading the latest Wall Street Journal/NBC News opinion poll is like glimpsing a snapshot of an alien civilization. Surely these are not the opinions of the flag-waving, beer-guzzling US masses depicted on television and by the rest of popular culture. Surely this is not the world view of the self-absorbed, numbed populace, addicted to the NFL and movie weepers.

Are we to believe that nearly two out of three (62%) of those polled are dissatisfied with “America’s role in the world”? If most citizens are unhappy with the US government destabilizing Iraq, Libya, Syria, Ukraine, or supporting genocide in Palestine despite unrelenting media lies and government deception, then how do our leaders justify their acts? Why do innumerable and endless wars continue?
Why do almost two-thirds of those polled (64%) express dissatisfaction with the “state of the US economy”? Are they not following stock market euphoria? Are they not listening to pundits who have declared “recovery”? Aren’t US citizens paying attention to financial cheerleaders?

Why do three out of four (76%) of the people have no confidence that “life for our children’s generation will be better than it has been for us,” up from 60% in 2007?

Why the negativism? Why the pessimism? Why do over half (54%) of poll respondents believe that “[t]he widening income gap between the wealthy and everyone else is undermining the idea that every American has the opportunity for a better standard of living”?

How can our fellow citizens hold such bold, radical ideas? How have they escaped the constant beating of the drums of war and the ubiquitous celebration of prosperity and American grandeur?

The answer is really quite simple: they have lost confidence in politicians, the political system, and other key institutions. The WSJ/NBC poll reveals that approval for President Obama has, this month, reached an all-time low of 40%. While this may seem like good news for the Congressional Republicans, it is not. Only 19% of respondents held positive views of the Republican politicians.
Perhaps the most stark demonstration of popular anger is the wholesale rejection of the “political system”: four out of five polled (79%) were dissatisfied with “the political system.”

Two things stand out: First, hyper-patriotism, economic confidence, and trust in the widely heralded US democracy is a myth. Second, the US people have far greater dissatisfaction with the course of the country than our leaders and the commentariat would like us to believe.

Clearly, there is a disconnect between the sentiments and desires of the masses and the actions and views of politicians and their media lackeys. In the most basic sense, the US political system does not respect or reflect the popular will. That is just to say it does not function democratically. Paraphrasing the pundits, the US is a failed democracy.

The same undemocratic leadership arrogantly postures as the guarantor of democracy to the rest of the world! The US government audaciously assumes the privilege of telling everyone else how to live! Knowing no shame, US rulers ignore the democratic crisis at home while mounting a crusade to enforce sham democracy abroad– a bitter irony.

Forcing US “Democracy” upon the World
Nothing exposes the hypocrisy of US rulers like their tragic destruction of Iraq. Driven by a lust to control the fate of all oil reserves in the Middle East and an intolerance of any regime that shows even a spark of defiance to US dictates, successive administrations have invaded, bombed, economically terrorized, invaded a second time, occupied and rekindled ethnic and religious animosities for over two decades—all in the name of fostering democracy. As a result, a once stable state is now what the US media like to call a “failed state.”

Never mind that the US had covertly helped to install the vicious, anti-Communist Saddam Hussein as a puppet ruler of Iraq. Never mind that the US encouraged and aided his brutal regime in a war against Iran. Never mind that despite Saddam’s iron grip, Iraqis enjoyed a relatively high standard of living and one of the more secular cultures in the Middle East in a country now often without electricity, insecure, and ridden with ethnic hatred.

Nonetheless, US elites celebrate the gift of democracy to the Iraqi people, dismissing the pain of war and occupation as a price well worth paying (by the Iraqis!).

Yet paradoxically the US government has friends–intimate friends–who are far more in need of a lesson in democracy, friends with even less regard for human rights and democratic practices. Consider the 1989 version of the CIA’s World Factbook, hardly a source likely to present the US’s foes in a good light or its friends negatively.

Compare pre-invasion Iraq to imperialism’s best friend on the Arabian Peninsula, Saudi Arabia. Despite the massive losses incurred in the war with Iran, Iraq had a slightly higher life expectancy than did Saudi Arabia in 1989. Literacy was also higher. More to the point, the CIA describes trade unions as “illegal” in Saudi Arabia, and suffrage and elections as “none.” Saddam’s brutal Iraq, by contrast, citing the same source, allowed some trade union activity and boasted universal suffrage and National Assembly elections last held four years prior. While Saddam’s democracy scorecard was pathetic, surely the feudal-like theocracy of Saudi Arabia was even more deserving of remediation.

Iraq’s once regionally stellar economy, measured by GNP per capita, was set back greatly by the Iraq-Iran War and was further devastated dramatically by US intervention and its aftermath, sinking to levels below those of 1950. Is that, and a decline in life expectancy, an acceptable price for US-imposed “democracy”?

We got a taste of the flavor of US-style democracy as we watched the US Administration call for the peaceful overthrow of the constitutionally installed Prime Minister of Iraq. It was no secret that the call for Maliki’s retirement or removal from the position was a condition of continued US support. Shamelessly, the Iraqi peoples’ will played no role in this extortionate change; the US Administration, not the Iraqis, decided Maliki must go. So Maliki is gone and another puppet is in his place.

While poll after poll demonstrate that most US citizens are tired of endless war, imagine what the Iraqi people feel about constant death and destruction from 1990 until today, unending war and death-dealing sanctions without relent.

The powerful, aggressive ISIS today poses the latest threat to Iraqis, thanks to the US government’s meddling in the affairs of her neighbors. Stirring the Syrian opposition and encouraging US allies to support the sectarian-driven insurrection against Assad has provided both the material means and tacit acceptance for ISIS’s machinations. Only unmatched hubris and unlimited hypocrisy could so irresponsibly unleash the dogs of war. Now the most militarily effective force in the US crusade against Syria’s president has crashed the Administration’s party in Iraq, threatening the very existence of a US puppet-state. And, despite desperate bombing by the US military, the only effectively proven counterforce to the brutal ISIS now is the guerillas of the Kurdish Workers Party, a movement that the US and its allies have hysterically labeled “terrorists.” How ironic, how insane, how tragic!

Twenty-first Century Crusades
Extinguishing independence and advancing US capitalism are unquestionably the constant goals of US foreign policy. But since the demise of Soviet power, those policies are advanced by a world-wide crusade under the false banners of democracy and human rights. Like the crusades of old, sanctimony proves to be a good cover for otherwise naked, indefensible aggression, plunder, and intervention. Whether it’s soft intervention (USAID, National Endowment for Democracy, NGOs) or military aggression (the CIA, NATO, US military), US rulers continue to push the limits of popular tolerance of a malignant foreign policy, an effort aided immensely by the lap-dog media.

Most recently, the US and NATO have destroyed Libya as a stable, viable state, interfered in political events in Egypt, and sparked a civil war threatening the future of Syria. The US arms and encourages Israel in its apartheid and genocidal policies while uncritically protecting it from the censure of most of the rest of the world.

In Ukraine, the US has played an irresponsible role– not unlike its strategic engagement with religious, anti-secular zealots in the Middle East– by funding, training, and encouraging the most xenophobic, nationalistic, even fascist elements to stage a coup against the elected president. Since the stage-managed replacement of Viktor Yanukovych with one of the country’s richest elites, Ukraine is waging a cruel, bloody assault on its dissident Eastern territories. Sickening irony: the US angrily condemns even the most moderate government actions against dissent in Syria, Venezuela, Cuba and a host of other countries perceived as adversaries, yet it finds no cause in the bombardment of innocent civilians in Eastern Ukraine. Where are the human rights organizations? The civilizing NGOs?

No country has been targeted by the US’s hypocritical “democracy” and “human rights” crusade as has Cuba. No country has so admirably repulsed that campaign. From assassination attempts to invasion, from raids to biological warfare, from slander to blockade and terror, the Cuban people have successfully guarded their independence and defended their chosen path. The latest exposures only show how desperate US elites are to return Cuba to the Empire. USAID, a government agency masquerading as a nonpartisan promoter of democracy, unleashed two recent covert programs against Cuba. Both programs bordered on the ridiculous: one, a “twitter” like program to seduce Cuban youth into dissent and, the other, a phony health care project to enlist Latin American youth to travel to Cuba pretending to promote health care and HIV prevention while planting seeds of opposition to Cuban socialism. Both programs show how easily deceit and dishonesty mix with US-style “democracy”.

Retire the word?
Once, the word “democracy” had meaning for those living in the US, a connection– often slender, but a connection– to the interests and collective will of the majority of people, the masses. No rational person ever thought that democracy was perfect, complete, or absolute. But many drew hope from the promise of democratic rule and democratic institutions. Many celebrated the democratic content of freedom from the bondage of slavery, of universal suffrage, and of the progress of labor. At the very least, the democracy inherited from the colonial revolutionists served the bourgeoisie and its cohorts well and left the the door cracked open for some truly democratic reforms (though the door was slammed shut when the danger of radical democracy arose).

But in the US today, the word is used to deceive, cheat, and oppress. “Democracy” serves to mask an oligarchic regime employing a Gestapo-like surveillance of every citizen. “Democracy” seeks to legitimize a two-party system that produces one-party results. “Democracy” is bought and sold like any other commodity. And “Democracy” is the protector of wealth and power.

Perhaps the D word, like the word “terrorist,” should be retired until sensible people with a principled commitment to popular rule can counter its defamation. Maybe “democracy” should be put on the shelf until a movement truly worthy of the word emerges. Judging by the recent WSL/NBC poll, the people are waiting for it.

Is There a Future for the European Union? 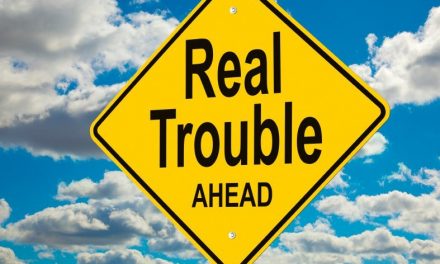