Diaz-Canel: the Best Answer Was Given by the People 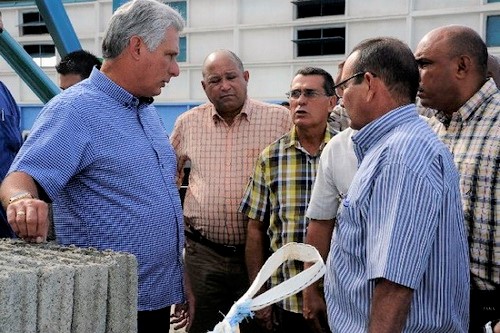 The best answer came from the people, Miguel Díaz-Canel, President of the Councils of State and Ministers, told the People’s National Assembly deputies, when addressing the acute lack of fuel Cuba experienced  in September, the main results of the measures adopted, and the strategy for the future.

The country did not stop. It lived in an organized manner, it was invigorated and strengthened and, in view of the lack of fuel, it grew. There was no lack of solidarity, support and the contribution of Cubans, and the unity of the country was strengthened and ratified,” said the president in his words during a working meeting prior to the IV extraordinary session of the IX legislature scheduled for this Thursday.

In his speech, broadcast tonight on Cuban television, the President also announced the upcoming implementation of new measures recently approved by the Council of Ministers and which are fundamentally related to domestic trade.

Diaz-Canel underlined that the actions undertaken to confront the fuel deficit started from the indications of the Political Bureau of the Communist Party of Cuba and its First Secretary, Army General Raul Castro, and proceeded to inform the people, so that they would understand and contribute to the meeting the challenge.

The premise was to preserve the country’s reserves that sustain vitality in more extreme situations and to dust off experiences that at other times have yielded results and to continue insisting on action in which saving is an important element in the life of each citizen, he added.

He pointed out that a tour of all the territories was carried out in which more than 1,800 cadres and leaders participated, which allowed to know how the measures were implemented, the contributions that could be socialized and those experiences of this stage that could continue to be applied due to their good results.

The President acknowledged that in September the country experienced a tense moment due to the lack of fuel with impacts on transportation, the economy, and people’s daily lives. However, the effects were less than those foreseen by the actions undertaken.

Díaz-Canel stressed that it is not yet possible to speak of normality and that in the next stage it has been proposed to work with 62 percent of the fuel compared to that used before the crisis, which means that one hundred percent of electricity generation is guaranteed but tensions will remain in other economic activities.

He added that it has been demonstrated that there are potentialities to save and that reserves must be created to face similar situations while noting that inventories have been accumulated to ensure levels of activity even until the end of the year in certain sectors.

To the extent that there is more guarantee and security in what is in inventory, the fuel level will be increased from that that 62 percent and, with the combination of savings and other measures, could reach 80 percent, he added.

Diaz-Canel denounced the persecution by the current U.S. Administration … and warned the Cuban people of the need to protect themselves and not be naive.

He stressed that the solutions to a type of situation like this elsewhere would have been neoliberal measures with budget cuts for social activities and price increases linked to the energy situation, but that in Cuba they did not resort to shock measures, but rather to savings and adjustment, especially in economic activity.

For the president in this period it was demonstrated that the Revolution is not isolated as evidenced by the support in the UN with the denunciation of the blockade or the visit of several heads of state and government of countries with which, even, joint projects are being worked on to continue improving the efficiency of the energy system.

Among the experiences emanating from this situation, Díaz-Canel highlighted the importance of ideological political work, the need to add young people to the country’s tasks and to continue with the savings measures that proved to be effective.

He indicated as priorities of the Cuban economy the production of food, the housing construction program, the computerization of society, exports, tourism, renewable energy sources, transportation and national production and the chains.

He highlighted as positive experiences that should continue the labor relocation of workers whose activities were paralyzed, better organization of work, alternative modalities of employment, greater use of animal traction and the support of state cars to public transportation.

He also mentioned the energy analysis to displace the high consumers of peak times, always with the concept of minimizing as much as possible the effects on the population and protecting basic services.

Diaz-Canel maintained the call to fight against hoarding and price hikes and stressed the support of non-state workers, attention to the needs of the population, and the impact of e-government.

He announced that it is a priority for the country’s economy to increase exports, substitute imports, reduce expenses, save and continue stimulating national production chains.

He advocated for more precision and rationality in the operation of the port-transport-internal economy, enhanced auditing systems in different instances, foreign investment and investment efficiency, local development and taking advantage of new decisions such as recognition of a secondary sector to finance public debt from savings of natural and legal persons.

“We have to work differently because the times are different but what does not change are the principles,” said the President, who stressed that this victory of the Revolution is above all a victory for the Cuban people.