This past month, two important events marked the world of Social-Democratic parties. In Sweden, on September 19, the party lost the election badly. It received 30.9% of the vote, its worst showing since 1914.

Since 1932, it has governed the country 80% of the time, and this is the first time since then that a center-right party won reelection. And to compound the bad showing, a far right, anti-immigrant party entered the Swedish parliament for the first time.

Why is this so dramatic? In 1936, Marquis Childs wrote a famous book, entitled Sweden: The Middle Way. Childs presented Sweden under its Social-Democratic regime as the virtuous middle way between the two extremes represented by the United States and the Soviet Union. Sweden was a country that effectively combined egalitarian redistribution with internal democratic politics. Sweden has been, at least since the 1930s, the world poster child of Social-Democracy, its true success story. And so it seemed to remain until rather recently. It is a poster child no more.

Meanwhile, in Great Britain on Sept. 25, Ed Miliband came from far behind to win the leadership of the Labour Party. The Labour Party under Tony Blair had engaged in a radical remaking of the party under the label "the new Labour." Blair had argued that the party should also be a middle way – one not between capitalism and communism but between what used to be the social-democratic program of nationalization of the key sectors of the economy and the unbridled dominance of the market. This was quite a different middle way than that of Sweden in the 1930s and afterwards.

The choice by the Labour Party of Ed Miliband over his older brother David Miliband, a key associate of Tony Blair, was interpreted in Great Britain and elsewhere as a repudiation of Blair and a return to a somewhat more "social-democratic" (more Swedish?) Labour Party.

Still, in his first speech to the Labour conference a few days later, Ed Miliband went out of his way to reassert a "centrist" position. He did however lace his statements with allusions to the importance of "fairness" and "solidarity." And he said: "We must shed old thinking and stand up for those who believe there is more to life than the bottom line."

What do these two elections tell us about the future of social-democracy? Social-democracy – as a movement and an ideology – is conventionally (and probably correctly) traced to the "revisionism" of Eduard Bernstein in late nineteenth-century Germany. Bernstein argued essentially that, once they obtained universal suffrage (by which he meant male suffrage), the "workers" could use elections to win office for their party, the Social-Democratic Party (SPD), and take over the government. Once they won parliamentary power, the SPD could then "enact" socialism. And therefore, he concluded, talk of insurrection as the road to power was unnecessary and indeed foolish.

What Bernstein was defining as socialism was in many ways unclear but still seemed at the time to include the nationalization of the key sectors of the economy. The history of Social-Democracy as a movement since then has been that of a slow but continuous shift away from a radical politics to a very centrist orientation. The parties repudiated their theoretical internationalism in 1914 by lining up to support their governments during the First World War.

After the Second World War, the parties algined themselves with the United States in the Cold War against the Soviet Union. And in 1959, at its Bad Godesburg conference, the German SPD officially repudiated Marxism entirely. It stated that "from a party of the working class, the Social-Democratic Party has become a party of the people."

What the German SPD and other social-democratic parties came to stand for at that time was the social compromise called the "welfare state." In this objective, in the period of the great expansion of the world-economy during the 1950s and 1960s, it was quite successful. And at that time, it remained a "movement" in the sense that these parties commanded the active support and allegiance of very large numbers of persons in their country.

When, however, the world-economy entered into its long stagnation beginning in the 1970s, and the world entered the period dominated by neo-liberal "globalization," the social-democratic parties began to go further. They dropped the emphasis on the welfare state to become the advocates merely of a softer version of the primacy of the market. This was what Blair’s "new Labour" was all about. The Swedish party resisted this shift longer than others, but it too finally succumbed.

The consequence of this, however, was that Social-Democracy ceased to be a "movement" that could rally the strong allegiance and support of large numbers of persons. It became an electoral machine that lacked the passion of yesteryear.

If however social-democracy is no longer a movement, it is still a cultural preference. Voters still want the fading benefits of a welfare state. They regularly protest when they lose still another of these benefits, which is happening with some regularity today.

Finally a word about the entry of the far right, anti-immigrant party into the Swedish parliament. Social-democrats have never been very strong on the rights of ethnic or other "minorities" – still less on the rights of immigrants.

Social-democratic parties have tended to be parties of the ethnic majority in each country, defending their turf against other workers whom they saw as undercutting their wages and employment. Solidarity and internationalism were slogans that were useful when there was no competition in sight. Sweden didn’t have to face this issue seriously until recently. And when it did,a segment of social-democratic voters simply moved to the far right.

Does social-democracy have a future? As cultural preference, yes; as movement, no.

Struggle to Overthrow Capitalism, Not Whitewash It 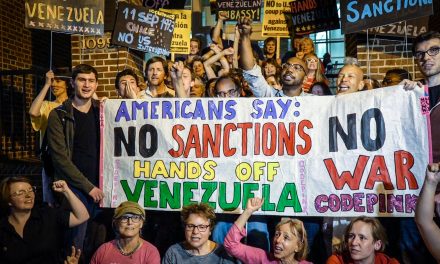 Jacobin Stabs Venezuela in the Front

From Revisionism to Party Liquidation