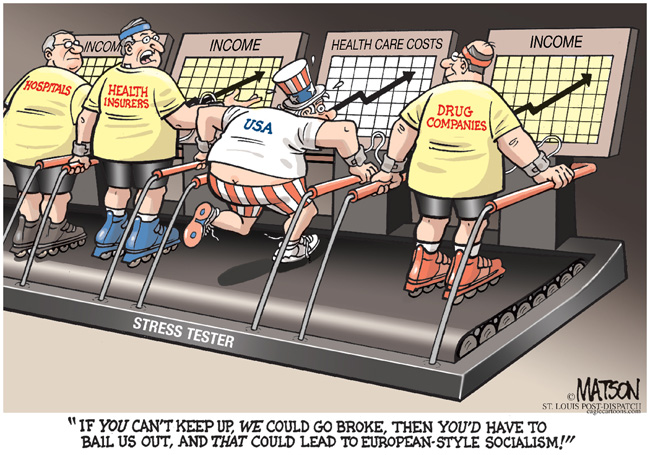 Health care in the United States is the most costly in the world. The per capita income the US spends on health care is double the average of other industrialized countries, yet other nations have better outcomes in life expectancy, infant mortality, and most measures.

In the US, we pay more but get less. About 40% of people in the US forego needed care because of cost. The powerful, dynamic unions of the CIO established the highest standards for health care in the country lifting up the rest of the nation as they set the floor.

Reining in that control now requires far more than collective bargaining. It requires a dynamic movement that rallies the rank and file of the labor movement, links with communities and the public, takes on the corporate controllers of health care, and pushes relentlessly until it passes national single payer health care, HR 676.

The evidence of the crying need to act is all around us. “Today, we said enough is enough, and went on strike for a restoration of health benefits and fair wages and working conditions,” said Fabia Sespedes, a housekeeper who has worked for 9 years at the Trump Taj Mahal in Atlantic City. Nearly a thousand workers at the Taj Mahal casino walked out at dawn as the July 4 holiday weekend began. They are cooks, housekeepers, servers and other casino workers, members of Local 54 UNITE-HERE. They have been without health care and retirement benefits since those were taken away in October of 2014.

Current owner of the Taj, billionaire Carl Icahn, is refusing to restore those benefits and threatening to shut down the casino. Half of the workers rely on subsidized health insurance and a third have no health benefits at all. Icahn extracted $350 million from the property using bankruptcy proceedings to strip Taj workers of health care and pensions. “Now we’re going to take it to the streets,” said Mayra Gonzalez, a pantry chef at the Taj for 26 years.

In June over 4,000 coal miners from seven states rallied in Lexington, Kentucky, to demand passage of Senate Bill 1714 to shore up health and pension funds. Without that action, 22,000 retired miners and their families face the dropping of their health care benefits before the end of the year. “We’re not asking for welfare—we’ve earned these benefits,” said Michael Partin a retired miner from Bell County who worked underground for 30 years.

In the compelling fiery rhetoric that is his custom, UMWA President Cecil Roberts called on the miners to go home, recruit five people each, and prepare to march on Washington, DC. A rally has been set at the US Capitol Building forSeptember 8, 2016.

In June 5,000 Minnesota Nurses Association members who work for the Allina Hospitals struck for 7 days as Allina sought to shift $10 million in health care costs onto nurses and their families. Monica Proulx, a surgery nurse for more than 20 years said that Allina has refused to negotiate over issues such as patient care and reducing workplace violence unless the union capitulates on the health insurance issue. The nurses are back at work but the struggle continues.

In May more than 350 workers at Honeywell Aerospace were locked out in South Bend, Indiana and in Green Island, New York. Members of UAW Local 9 in South Bend who make airplane brakes and wheels say they voted the contract down by 270 to 30 because it would drastically increase what they pay for health insurance. Local President Adam Stevenson says those who were working nights were ushered out of the plant by security guards and the day shift was barred from entering. Stevenson said one of the sticking points in the negotiations is that Honeywell wants to be able to change the structure of union members’ health care benefits, including what people pay for premiums and deductibles, during the term of the contract. The union has planned a rally forJuly 18.

At the Green Island location more than 500 supporters came out to rally with UAW Local 1508 where workers at the picket line say the average out-of-pocket expenses for a family under the plan included in the company’s offer will rise by as much as $7,000 a year. Tim Vogt, a 29 year Honeywell employee and President of UAW Local 1508 said, “We cannot accept a contract that destroys our ability to provide for our families’ health and well-being.” The lock out continues. Last Christmas thousands of Honeywell retirees received a letter from their former employer announcing that at the end of 2016 they would no longer have health insurance.

In Fostoria, Ohio, where over 1,000 of those retirees live, UAW Local 533 President David Angles said, “It is dishonorable that this corporation would do this to people that gave 30 or more years of their lives to this company helping them make billions of dollars in profit and then turn around and take this benefit away during a time in their life that they need it the most.” “We are the only industrialized nation in the world that does not have a national health care system and it’s time. Stand up and do something, if not for yourself, your children and grandchildren, because they will need your help,” concluded Angles. President Angles is right.

Stand up and do something.

Begin by getting your union or organization to endorse HR 676, national single payer health care. A sample resolution is here. Organize your city, county, or state to endorse HR 676. Use as a model one of the resolutions that have already been passed. They are here. UnitedHealth Group CEO Stephen J. Hemsley took home over $66 million in compensation in 2014, while the health care crisis continued for millions of workers.

As retired USW steelworker Steve Skvara asked in Chicago when he stood up at a 2007 AFL-CIO Presidential Candidates Debate: “Every day of my life, I sit at the kitchen table across from the woman who devoted 36 years of her life to my family and I can’t afford her health care. What’s wrong with America and what will you do to change it?”