Europe and the European Union, Realities, Experiences of Struggle

We would like to start our contribution by recalling some of what the political representatives of European monopoly capitalism have achieved so far.

* They have appropriated fiscal independence from member-states, with the European Central Bank and the Stability and Growth Pact criterion and its own currency.

* They have established an EU weapons procurement and development agency.

* They have established a "Rapid Reaction Force" and new Battlefield Groups consisting of 60,000 battle-trained soldiers, which will be able to operate thousands of miles beyond EU borders.

* They have an EU Foreign Minister, though not yet a united foreign policy except on some specific issues, and a fledgling EU diplomatic corps.

* They have established a legal structure in the form of the European Court of Justice, which can override the courts of member-states, a body that constantly arrogates to itself greater and greater power.

* They have a political structure that is not accountable to democratic scrutiny or accountability.

* They are attempting to push through a constitution that would enshrine current political and economic structures and priorities. This is linked to a court structure that sees its role as an escalator for increasing the powers of the centre as against the authority of the member-states.

* They have a united approach to economic and trading relations with the countries of the majority world and are imposing neo-liberalism on these countries through the Economic Partnership Agreements. This is a reconfiguration of neo-colonialism.

Over the last few months we have witnessed the unprecedented mobilisation of workers throughout the European Union. They have been mobilised in defence of their interests and against decisions taken by the EU Commission.

We had the mobilisation of dock workers against the Dock Directive, which would have resulted in the loss of thousands of jobs. More recently we had the mobilisation of tens of thousands of workers in the struggle to defeat the Services Directive, which had some effect on the European Parliament in its discussion on the measure. It is clear that there is growing disillusionment with different policy positions and decisions being taken by the EU Commission and Council of Ministers. At this stage workers’ frustration and disillusionment are still aimed at the decisions themselves, rather than at the institutions that make those decisions.

It is clear that the much-heralded victory by the old social-democratic forces within the European Union is very hollow and without real substance. But the very fact that they have been forced to take up positions against the directive that they themselves have promoted is a clear indication of the pressure they have come under, and of the potential of those forces to push ahead of the limitations that social democracy wished to place upon them. The sham fight of the social democrats is a reflection of the real resistance of the working class. But it is designed to limit that resistance, not to lead it.

Even the European Trade Union Confederation, which is a creature of the EU Commission and receives 80 per cent of its funding from the Commission, was obliged to take a critical position in relation to the Services Directive. It is noticeable that statements from different national trade union federations have not been so approving of the concessionary position adopted by the EU Parliament.

Clearly a situation is opening up in which a body such as the ETUC has to be ignored by serious trade unionists unless it ceases to be a tool of the Commission. To do this would cut off one of the main conduits from the EU Commission and European monopoly capitalism’s influence within workers’ organisations.

From our viewpoint we note what the Irish commissioner Charlie McCreevy said after the vote in the European Parliament and repeated in a speech he delivered to the Forum on Europe held in Dublin on 23 February 2006: that the Commission will continue to push those elements that have been temporarily withdrawn from the Services Directive-that they will be "revisited." We believe this to be in fact the case, and it reflects the fact that the withdrawal of certain elements was purely a tactical position by the Commission.

The European Round Table of Industrialists is still determined to push this directive. After all, it is its brainchild. There is no point in having access to and control over subordinate states in eastern Europe if you can’t use and exploit the pool of cheap, well-educated and skilled labour that is available in those countries.

The protagonists of European centralisation have a record of dogged patience and tenacity, which we would do well to match.

The strategy of European monopoly capitalism is, having wrecked the economies of eastern Europe, to use the workers of those countries as a battering-ram to undermine and roll back the gains made over the last five decades by workers in western Europe. To establish and maintain workers’ unity in this situation is a serious challenge for our parties and for trade unions.

We are now moving into a period with great potential, where workers faced with the downward pressure on wages and conditions, such as the length of the working week, retirement age, and pensions, will either have to resist or to see hard-won gains disappear like snow on a warm spring day.

We have had clear examples illustrating the fact that when leadership is shown, workers will follow, such as the case of the Swedish building workers and the Irish Ferries dispute, when the management of the company wanted to replace all its Irish workers with contract workers earning less than the Irish minimum wage, with twelve-hour shifts, living and working on board ship for six months, and then being let go. They also wanted to re-flag the ships in Cyprus and deregister them in Ireland, thereby no longer having to adhere to Irish labour legislation with regard to minimum pay, time, and working conditions. (The national minimum wage in Ireland is EUR7.65 per hour. Irish Ferries pay their non-Irish workers EUR3.50 per hour.)

Because of the nature of the compromise agreed to settle the Irish Ferries dispute, and the negotiations now under way for a new national "partnership agreement" between the government, employers, and unions, there is a growing tendency for the national minimum wage to become the maximum wage for many workers. Work displacement is on the increase, and immigrant workers’ wage rates are forcing down the wages of all workers in many industries, including the building industry, service industries, and small manufacturing.

Some employers have seized the opportunity to attack even the right to join a union. Our unions are in a position where they must turn and fight to maintain any relevance. From the Irish experience, what is being pursued and what is central to the Services Directive is to bring the "flags of convenience" on shore. Flags of convenience will no longer be confined to shipping but will be applicable even to the provision of public services, such as education and health.

Another area that we need to focus our attention and attack on is the role and functioning of the European Court of Justice. This is a deeply reactionary and baneful body that shares the mind-set of the Commission. It has come under criticism from right-wing forces, such as the German and Austrian Chancellors. The criticisms they have made are in fact correct, but we should not leave this attack to the right. The role and functioning of the court is to undermine national democratic accountability and control. It is a central plank of the European centralisers.

Now the new imperial army of 60,000 battle-ready soldiers is taking shape. As they will have a six-month rotating service in deployed conditions, it would mean they would need 120,000 front-line soldiers together with back-up resources. Is this not what they require to fulfil what Jacques Delors predicted, that the wars of the twenty-first century would be about resources?

They are going to be trained in jungle and desert warfare. Where are the jungles and deserts within the countries of the European Union? This provides us the opportunity to raise the political question about the role of such an aggressive army.

We need also to be mindful that they have not given up the goal of pushing through the European Constitution, despite the fact that it must be adopted unanimously by all member-states. Ratification of the constitution continues to be pursued in many member-states’ parliaments. They clearly want to have a situation where, say, twenty-three out of the twenty-five have ratified it, bringing greater pressure to bear for a rethink by those who rejected it.

It could also be argued that in fact we are getting the provisions of the constitution bit by bit, without the encumbrance of democracy at the national level. In fact, do they really need this constitution? Those who voted "no," and those who would have voted "no" if they had the chance, had better be vigilant to prevent it being enacted by stealth.

For decades the role and nature of the process that is now maturing around the European Union was obscured. It is only becoming clear now when the existing treaties that many in this room have opposed are taking material form in that they are beginning to affect the lives of workers and their families and communities. The much-peddled "European vision" is beginning to appear for what it really is and has been all along. We are witnessing a renewed grab for increased economic and political power by the political elites in the service of monopoly capitalism, to break free of any national democratic control or accountability.

New arenas of struggle are opening up around us. Workers need communist leadership. Why else would we have the stepped-up attacks on communism, both organisationally and ideologically, right across Europe? If our ideology has been defeated, as our enemies claim, then what is all the fuss about? We need to remember that our ideology derives from the very nature of capitalism itself. We did not invent class struggle. We are a product of it, the consequence of it.

There are important differences among the parties represented here today, including differences concerning the very nature of the European Union. But we can and must unite our forces against the offensive against the working class that is developing throughout the European Union. The present situation compels us to find the ways and the means to struggle together rather than struggle against each other.

We should be seeking to exploit our class enemy’s contradictions. We may not agree on everything; but life and experience will show which is the best way forward.

We can and must find unity on the following issues:

(1) Continuing to oppose the Services Directive.

(2) Continuing to mobilise workers throughout the European Union and preventing their demobilisation by those forces that wish to sow compromise and confusion.

(3) Stepping up understanding of the role of the Europe Court of Justice.

(4) Continued vigilance and resistance to the EU Constitution.

(5) International co-operation in relation to directives such as the Dock and Rail Directives.

(6) A greater sharing of knowledge of what is happening at the EU level.

(7) Taking united initiatives in relation to important debates and proposals emanating from the Brussels bureaucracy.

(8) Mobilising against the EU war machine and its battlefield groups and opposing all military adventures and threats.

(9) Opposing the unequal terms of trade and the dictation of neo-liberal economic policies that, together with the United States, the European Union is imposing on the poor countries of the world.

(10) Uniting in solidarity with the peoples of Cuba and Venezuela and with all peoples resisting imperialist oppression.

Comrades, we either take the road of assimilation and compromise or we take the course of struggle. 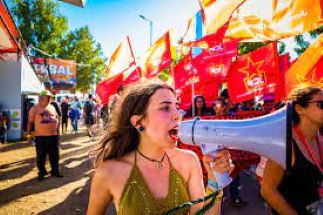 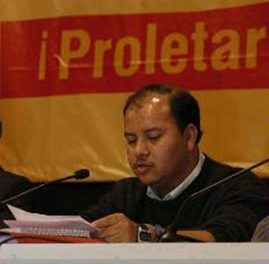