Participants at the plenary meeting delved into different issues related to the Party’s organization, national defense, the incorporation of new members to the Central Committee, and other subjects related to the country’s development and the complex international situation in today’s world.

In several interventions during the meeting, Fidel Castro, First Secretary of Cuba’s Communist Party Central Committee, said the Revolution is committed to facing the serious challenges stemming from the complicated international situation and its own deficiencies.

The president noted the decisive role that the Party must play in the current battle being waged by the nation and how it needs to be strengthened more than ever. The Secretariat is re-established, he said, at the time the Party needs it jost. It is made up by a number of Party cadres with proven success in their work in the provinces and who have accumulated valuable experiences. They can be of great help to the organization, he stressed.

The leader of the Cuban Revolution elaborated on the negative impact the United States has on the international economy. He pointed to, among other factors, the uncontrolled printing of dollars to pay for goods and services above its real purchasing power, noting that "dollars are paper that people no longer want to amass." Given the grim economic and social panorama that is affecting above all poor countries, "the world is becoming a kind of volcano that could erupt anywhere," he argued.

It is of utjost importance -he added- that everyone has a clear idea of these serious problems, of the price of every product the country buys or exports. He warned about the need to do away with the old habit of asking for things without measuring the consequences. He insisted in that people should have a comprehensive knowledge and vision of the problems that exist within their circle of action. Everybody is compelled to think and not drop their guard, at a time when any recklessness becomes more inexcusable.

He made an appeal, aided by everybody’s input, for a forceful fight against crime, a battle he said will be undoubtedly won. He cited the effective role performed by Party members at work centers who recently labored for two months to bring a new style and more dynamic methods that have become a permanent asset in the organization’s work. He highlighted the importance of criticism, of appealing to people’s integrity in the fight against criminal behavior, and even using the media, mainly the local media, in this fight.

The First Secretary of the Cuban Communist Party affirmed that although the country has achieved military invulnerability, the same cannot be said about the decisive front of the economy where it is taking more time to achieve that status. In that light, Fidel spoke on the many important economic initiatives being undertaken in the country and the pivotal role that saving has as a source of resources, especially of electric power and fuel.

He made reference to the nation’s accomplishments in healthcare and education, without ignoring the deficiencies that still prevail in those vital services. He also mentioned the efforts being made to guarantee food for the population at a time when the cost of foodstuffs are skyrocketing on the world market. He further pointed to the measures being adopted to get the island ready to face even more complex situations, like those that could derive from the spread of the avian flu epidemic.

Cuba’s prestige grows with each passing day, he noted, because it is doing things not being done by anyone else. He mentioned the examples of the Operation Miracle eye-surgery program and the massive help being provided to other countries in healthcare and education, including the training of thousands of doctors in Cuba.

This makes us stronger, he said, because it won’t be easy for an empire to destroy a people who are giving back eyesight to millions of Latin Americans. And he summed it up by saying: "We have enormous strengths to stand on, and they are essential in this battle that is aljost won."

However, he said the task does not become easier because the enemy has lost ground. To the contrary, the threat is greater because a hurt beast is much more dangerous. It is necessary, he said, to struggle with all our strengths and means in the political arena. We must continue strengthening ourselves, within and outside, economically and militarily, amidst this great battle that our people will undoubtedly win.

The document summarizes the results achieved since the July, 2003 Extraordinary Plenary Meeting of the Communist Party Central Committee that analyzed this topic and the main tasks to be accomplished in such a decisive area.

Important advances in defense planning and organization where identified at the national and local levels with the purpose of developing of our defense strategy taking into account the current way the enemy makes war, and the possibilities of their firepower.

Defense preparation has gained in its effectiveness, both of the military personnel on active duty as well as the civilian leaders and officials and the population in general, with a more rational and efficient use of the time that Cubans devote to such a sacred duty. Also mentioned as significant are the results achieved in the preparation of the theater of military operations, as well as the study of every inch of the national territory in the interest of the defense, among other tasks of great complexity and magnitude.

The important results achieved in the modernizing and manufacturing of combat equipment with the latest advances in science and technology, and above all, to adapt them to the uses foreseen in Cuba’s defense strategy, were key points mentioned. Also highlighted were the efforts made by a large number of businesses and other entities both military and civilian.

The Plenary recognized the decisive role played by the Bastion 2004 Strategic Exercises in the strengthening of the defense, including the important decisions made by the Commander in Chief during and after their development. This wasn’t limited to strictly technical-military matters, but also involved aspects related to the economic and social development of the nation with a considerable direct impact on the defense.

With a standing ovation, the Plenary unanimously adopted the ideas presented by the Second Secretary of the Party on June 14, on the occasion of the 45th Anniversary of the Western Army, and in particular when he stated:

"We are confronting an enemy whose stubbornness and arrogance frequently leads it to make mistakes, but that doesn’t mean that it is a fool. It knows that the special trust that the people have in the founding leader of a Revolution can not be transmitted as if it was an inheritance, to those that in the future will be occupying the main leadership positions of the country.

"I repeat what I have said on many occasions: The Commander-in-Chief of the Cuban Revolution is one and only one, and only the Communist Party, the institution that groups the revolutionary vanguard and guarantees Cubans unity during all times, can be the dignified heir of the trust deposited by the people in its leader. We are working for that, and that’s how it will be, the rest is pure speculation.

"In the same way that we have won all previous battles, both in Cuba as well as abroad when accomplishing our internationalist duties, we will defeat the enemy that attempts to hide among our lines, and we will consolidate the Revolution and become stronger on all fronts," said Raul Castro.

As an important step in the ongoing process to improve the Party’s work, the Plenary approved the proposal submitted by the Political Bureau to reestablish the Secretariat, as a directing entity that will aid in the daily work of the Party and that will be in charge of assuring that its accords be fulfilled.

In the proposal on the members of the Secretariat, qualifications, experience and the background of the comrades were taken into account as well as, the presence among its members of both historical leaders and others that have proven themselves during the 47 years of Revolution, working from the grassroots level and up.

In addition to the First and Second Secretaries, comrades Fidel and Raul, it was agreed that the following comrades form part of the Secretariat:

The Plenary coincided in the evaluation made by the Political Bureau during its meeting of April 26 regarding the advances that have been accomplished in the work of the Party during the past months resulting from the changes introduced in the style and working methods, and above all in the emphasis given to the direct attention at work places.

Pedro Betancourt García, first secretary of the Provincial Committee of the Party in Matanzas.

Roberto Morales Ojeda, first secretary of the Provincial Committee of the Party in Cienfuegos.

Francisco Soberón Valdés, Minister-President of the Central Bank of the Republic of Cuba.

Omar Ruiz Martín, first secretary of the Provincial Committee of the Party in Villa Clara.

Julio García Rodríguez, first secretary of the Provincial Committee of the Party in Camaguey.

Luis Torres Iríbar, first secretary of the Provincial Committee of the Party in Guantanamo.

In addition to these movements, the Plenary analyzed the case of comrade Marcos Portal Leon, whose mistakes at the helm of the Ministry of Basic Industry were cited in the past, mainly in relation to the policy for the development of nickel production and the strategy of electricity generation, errors that Portal Leon admitted with frankness.

Taking into consideration that these were not matters of principles, the Plenary approved his removal as a member of the Political Bureau, although keeping him as a member of the Central Committee. It also recommended to the Council of State, that in agreement with the established procedures, he be also relieved as a member of this State entity, while maintaining his status as member of the National Assembly of the People’s Power (Cuban Parliament).

These words spoken by Fidel Castro summarized the spirit prevailing at the Plenary of the Central Committee of the Cuban Communist Party: "However good the perspectives may be in all aspects, we can not neglect the smallest detail." He added: "This nation has many great merits for what it has done up until today and many more yet to be done."
Es preciso que el Partido se fortalezca como nunca. 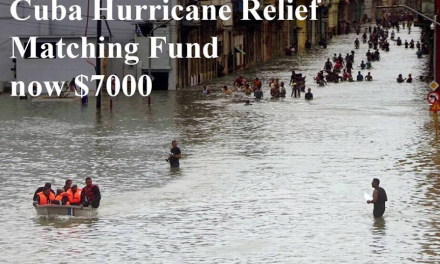 Our Matching Fund for Cuba Hurricane Relief Raised to $7000