Bush seemed happy to have Lula sitting to his right during dinner on Friday. On the other hand, Hu Jintao, whom he respects for the enormous market in his country, the capacity to produce consumer goods at low cost and the volume of his reserves in US dollars and bonds, was sitting to his left.

Medvedev, whom he offends with the threat of locating strategic radar and missiles not far from Moscow, was assigned a seat rather distant from the White House host.

The King of Saudi Arabia, a country that in the near future will produce 15 million tons of light oil at highly competitive prices, was also sitting at his left, at Hu’s side.

Meanwhile, Gordon Brown, the Prime Minister of the United Kingdom and his most faithful ally in Europe, could not be seen close to him in the pictures.

Nicolas Sarkozy, who is rather disappointed at the present architecture of the financial order, was far from him,  looking embittered.

The President of the Spanish Government, Jose Luis Rodriguez Zapatero, a victim of Bush’s personal resentment attending the conclave in Washington, I could not even see in the television images of the dinner.

That’s how those attending the banquet were sitting. Anyone would have thought that the following day there would be a profound debate on the thorny issue.

On Saturday morning, the press agencies were reporting on the program that would unfold at the National Building Museum in Washington, D.C. Every second was covered. There would be an analysis of the current crisis and the actions to be taken. It would start at 11:30 a.m. local time. First, there would be a photo op, or “family picture” as Bush called it, and twenty minutes later the first plenary session would start followed by a another one in the second half of the day. Everything was strictly planned, even the fine sanitary services.

The speeches and analysis would last approximately three hours and 30 minutes. Lunch would be at 3:25 local time, immediately followed by the final declaration at 5:05. One hour later, at 6:05, Bush would be leaving for Camp David to rest, have dinner and have a pleasant sleep.

Those following the event were impatient to see the day going by and trying to know how the problems of the earth and the human species would be dealt with in such a short time. A final declaration had been announced.

The fact is that the Summit’s final declaration was worked out by previously chosen economic advisors, very much in line with neoliberal ideas, while Bush in his statements prior to the summit and after its conclusion claimed more power and more money for the International Monetary Fund, the World Bank and other world institutions under strict control of the United States and its closest allies. That country had decided to inject 700 billion dollars to bailout its banks and multinational corporations. Europe had offered an identical or even higher figure. Japan, its strongest pillar in Asia, has promised a 100 billion dollar contribution. In the case of the People’s Republic of China, which is developing increasing and convenient relations with Latin American countries, they are expecting another contribution of 100 billion dollars from its reserves.

Where would so many dollars, euros and pound sterlings come from if not from the deep indebtedness of new generations? How can the structure of the new world economy be built on paper money, which is what is really circulating in the short run, when the country issuing it is suffering from an enormous fiscal deficit? Would it be worthwhile traveling by air to a place on the planet named Washington to meet with a President with only 60 more days left in government and signing a document previously designed to be adopted at the Washington Museum? Could the US radio, TV and press be right not to pay special attention to this old imperialist game in the much-trumpeted meeting?

What is really incredible is the final declaration adopted by consensus in the conclave. It is, obviously, the participants’ full acceptance of Bush’s demands made before and during the summit. Some of the attending countries had no choice but to adopt it; in their desperate struggle for development, they did not want to be isolated from the richest and most powerful and their financial institutions, which are the majority in the G20.

Bush was really euphoric as he spoke. He used demagogic phrases which mirror the final declaration.

He said: “The first decision I had to make was who was coming to the meeting. And obviously I decided that we ought to have the G20 nations, as opposed to the G8 or the G13. But once you make the decision to have the G20 then the fundamental question is, with that many nations, from six different continents, who all represent different stages of economic development, would it be possible to reach agreements, and not only agreements, would it be possible to reach agreements that were substantive? And I’m pleased to report the answer to that question was, absolutely.”

“The United States has taken some extraordinary measures. Those of you who have followed my career know that I’m a free-market person – until you are told that if you don’t take decisive measures then it’s conceivable that our country could go into a depression greater than the Great Depression.”

“[…] we just started on the $700 billion fund to start getting money out to our banks.”

“[…] we all understand the need to work on pro-growth economic policies.”

“Transparency is very important so that investors and regulators are able to know the truth.”

The rest of what Bush said goes more or less along this line.

The final declaration of the summit, which takes half an hour to read in public due to its length, is clearly defined in a number of selected paragraphs:

“We, the leaders of the G20 have held a first meeting in Washington, on November 15, in the light of serious challenges to the world economy and financial markets…”

“[…] we should lay the foundations for a reform that will make this global crisis less likely to happen again in the future. Our work should be guided by the principles of the free market, free trade and investment….”

“The authorities, regulators and supervisors from some developed nations did not realize or did not adequately warn about the risks created in the financial markets…”

“Many emerging economies, which have helped sustain the world economy, are increasingly suffering from the world slowdown.”

“We note the important role of the IMF in response to the crisis; we salute the new short-term liquidity mechanism and urge the constant reviewing of its instruments to ensure flexibility.”

“We will make sure that the IMF, the World Bank and other multilateral developing banks have the necessary resources to continue playing their role in the solution of the crisis.”

“We shall exercise a strong monitoring of the credit agencies through the development of an international code of conduct.”

“We pledge to protect the integrity of the world financial markets by reinforcing protection to the investor and the consumer.”

“We are determined to advance in the reform of the Bretton Woods institutions so that they reflect the changes in the world economy to increase their legitimacy and effectiveness.”

“We shall meet again on April 30, 2009, to examine the implementation of the principles and decisions made today.”

“We concede that these reforms will only be successful if they are based on a serious commitment to the principles of free market, including the rule of law, respect for private property, free trade and investment, efficient and competitive markets and effectively regulated financial systems.”

“We shall refrain from erecting new barriers to investment and trade in goods and services.”

“We are aware of the impact of the current crisis on the developing nations, especially on those most vulnerable.”

“We are certain that as we advance through cooperation, collaboration and multilateralism we will overcome the challenges and restore stability and prosperity to the world economy.”

This technocratic language is beyond grasp of the masses.

The empire is treated courteously; its abusive methods are not criticized.

The IMF, the World Bank and the multilateral credit organizations are praised despite the fact that they generate debts, enormous bureaucratic expenses and investments while supplying raw materials to the large multinationals which are also responsible for the crisis.

This goes on like that, until the last paragraph. It’s a boring declaration full of the usual rhetoric. It doesn’t say anything. It was signed by Bush, the champion of neoliberalism, the man responsible for genocidal wars and massacres, who has invested in his bloody adventures all the money that would have sufficed to change the economic face of the world.

The document does not have a word on the absurd policy promoted by the United States of turning food into fuel; or the unequal exchange of which the Third World countries are victims; or about the useless arms race, the production and trade of weapons, the breakup of the ecological balance and the extremely serious threats to peace that bring the world to the brink of annihilation.

Only a short four-word phrase in the long document mentions the need “to face climate change.”

The declaration reflects the demand of the countries attending the conclave to meet again in April 2009, in the United Kingdom, Japan or any other country that meets the necessary requirements — nobody knows which — to examine the situation of the world finance, dreaming that the cyclical crisis with its dramatic consequences will never happen again.

Now is the time for the theoreticians from the left and the right to offer their passionate or dispassionate criteria on the document.

From my point of view the privileges of the empire were not even touched. Having the necessary patience to read it completely, one can see that is simply a pious appeal to the ethic of the most powerful country on earth, both technologically and militarily, at the time of economic globalization. It’s like begging the wolf not to eat up Little Red Riding Hood. 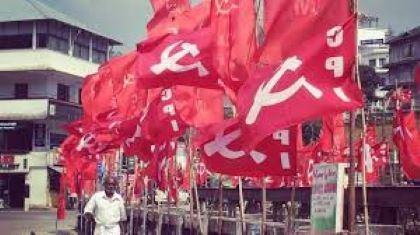 Kerala Communists Serve the People, Look to Youth and Women