In November the Communist Party of Ireland held its 23rd National Congress in Belfast. Communists from all over Ireland gathered to share and exchange experiences, to discuss and debate the current political situation. The congress also provided an opportunity to establish priorities for the coming period and laid out the approach that the CPI should take.

The congress was the culmination of six months of discussion and debate in branches around the country. Individual members not connected to a branch structure also had the opportunity to put forward amendments to the draft political resolution.

The political resolution was the main document before the congress for debate and adoption. The resolution covers a number of areas: the international situation, developments within the peace process and the Belfast Agreement, assessing the situation in the Republic, and then dealing with important areas of struggle, including trade unions, women, young people, neutrality, the draft EU constitution, racism, the environment, and culture.

The resolution analyses the continuing wars in Afghanistan and Iraq and the growing inability of the United States and its allies to impose their will on those occupied countries. It also notes the continuing strategy of global domination to secure access to markets and the control of resources in the interests of transnational corporations. It further elaborates on the ever-growing arms race resulting from the US strategy of global domination, which is forcing other countries to pursue the nuclear option as a means of defending themselves.

The congress asserted that the European Union as it is now being constructed is a danger to world peace and is of itself an emerging imperialist entity, attempting to impose unfair trade relations in the interests of transnational corporations on countries of the majority world through its "economic partnership agreements," a refinement of neo-colonialism. The congress also reaffirmed opposition to the draft EU constitution and noted that more and more workers throughout Europe are beginning to understand that the attacks on their living standards are a direct result of the policies being pursued by the forces propelling EU centralisation and integration.

In relation to the peace process, the congress reaffirmed our support for the Belfast Agreement, stating clearly that there is a need for the re-establishment of an Assembly and Executive, around which political struggle on such issues as water charges, rates, poverty, discrimination, proper education and health can be developed. It is on these issues that sectarianism can be lessened and eventually overcome, with the potential to undermine the base of unionism. The resolution points out that, "the failure to implement the Belfast Agreement has had the effect of reinforcing sectarian divisions and is responsible for the loss of progressive political momentum through apathy and polarisation."

The resolution reinforces the view held by the CPI since the signing of the Belfast Agreement that this agreement is a vehicle, a means of advancing political goals; the agreement is not the end in itself. The resolution outlines the importance of building an all-Ireland approach to economic development as the basis for re-establishing a modern manufacturing industry and for lessening the dependence on transnational corporations.

The assessment of the congress in relation to the Republic is that the extent of personal borrowing, the extortionate house prices, the dependence on transnational corporations and the continuing privatisation of public assets are leading to an overexposed and vulnerable economy, exposed to global fluctuations and the movements of capital to other developing economies. Despite more than a decade of high growth, poverty is still endemic in many working-class communities and has a big bearing on children. Housing shortages and long waiting lists for social housing expose the naked greed that now dominates the provision of housing in our country. The ideological push to establish the dominance of private over public medicine and health care will only lead to greater fragmentation, with those who can afford it receiving greater and better care.

In relation to the trade union movement, we will be returning to this vital area with a special all-Ireland gathering of trade union activists within the party to further develop our work within the unions and to reassert the legitimacy of left and socialist views on economic and social development.

The role and work of the Connolly Youth Movement were assessed, and the importance of independent youth political action was encouraged.

Women, despite the economic changes, still bear the brunt of social responsibility for domestic work, and the necessity for people to travel long distances to their place of work is placing even greater burdens on women as parents as well as workers. In the coming year we will be attempting to reassert the internationalist and working-class nature of International Women’s Day, which has been reduced to a social event for professionals and business lunches.

The CPI will be launching in the new year its "listening to the people," in which the party will be reaching out to as many people’s organisations, trade unions and political, cultural and environmental organisations as possible, to hear about and learn from their priorities and goals and to share our own analysis of the way forward.

The congress also adopted a resolution on international solidarity, in which the CPI expresses its support for the fighting people of Cuba and the new potential that is now emerging in Latin America with the revolutionary leadership being given by Venezuela.

It is clear from the international messages of solidarity received from communist parties across the world that the upheaval resulting from the counter-revolution and the deliberate dismantling of socialism is now past. The congress provided a strong platform for re-establishing and developing the influence of the Communist Party here in Ireland.

The congress documents will be published early in the new year; in the meantime they can be viewed on the CPI web site atwww.communistpartyofireland.ie.

Twenty-Third Congress of the CP of Ireland 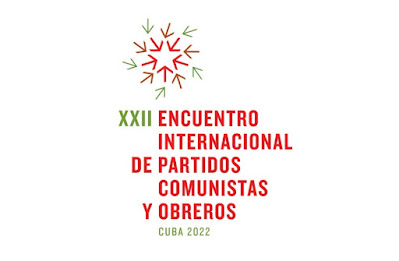