For Peace! No to NATO!

In a context that is marked by an ever-deeper structural crisis of capitalism, by deeper exploitation of the workers and peoples, by inter-imperialist rivalries and by complex processes of realignment of forces on a world level, imperialism is embarking on new anti-democratic thrusts and militarist interventions, and is advancing with coercive solutions trying to perpetuate itself and defend its class interests.

The militarist offensive unleashed by the imperialist powers and by NATO has a global and multi-faceted nature.
Imperialist war is being intensified globally under the pretext of combat against terrorism. Imperialist blocs, like NATO, are being consolidated. The militarization of the European Union is being speeded up with the fraudulent adoption of the Lisbon Treaty that encompasses the concept of the European Union as NATO’s European pillar.

There is an ongoing arms race and investment in new and deadlier weapons. Military spending reaches record levels, particularly in the U.S. and the European Union. NATO’s areas of influence and imperialist military-strategic alliances, namely through the so-called "Partnership for peace" are being expanded in Asia, in the territory of the former Soviet Union, as well as in Africa.

The world-wide network of US and NATO-member countries’ military bases is being expanded. Military forces are being deployed from Latin America to Africa; from the Middle East, Indian Ocean and Central Asia to Eastern Europe, the Caucasus and the Black Sea.

The occupation of Afghanistan and Iraq continues, whilst new military aggressions are being launched against various countries. Plots and interference continue in Latin America and in various countries of the African continent. Provocative maneuvers are multiplied, as in Lebanon. The Palestinian issue remains unsolved, likewise the issue of Western Sahara, while imperialist crimes continue with impunity. Provocations against the People’s Republic of China, that the arms sales to Taiwan by the U.S. is a particularly serious example, and threats against countries such as Iran and Syria are being stepped up.

There are growing attacks against the sovereignty of States, notably with changes of borders, of which the self-proclamation of the independence of the Serbian province of Kosovo is a serious example. The International Law that emerged from the correlation of forces resulting from the defeat of Nazi-fascism in the Second World War is being seriously undermined and is the target of a process that aims its destruction.

In the name of "security" and the "war on terrorism" securitarian thrusts are revived; xenophobic nationalism and religious and cultural intolerance is being instigated; crimes against human rights, such as social, economic and democratic rights and the right to political and social participation and organization, are being committed; anti-Communist campaigns are being promoted and the forces that stand up against imperialism’s offensive and defend the social and national rights of peoples, are persecuted.

The reality of the world at the beginning of the 21st Century belies the campaigns to rehabilitate the image of US imperialism which were undertaken with the election of Barack Obama. The nature and goals of US and NATO policies are clear: the control over natural and energy resources; control of technology; the expansion of markets; military and geo-strategic domination. In other words, a response, based on the use of force, to the relative weakening of the position of the USA in the international framework.

The rhetoric of "multilateralism" and "dialogue" is exposed by the war-mongering and interventionist policy of the US, the European Union and NATO, by the ongoing imperialist offensive and the real risk of new military conflicts, from the Middle East and Central Asia to Latin America. Despite the antagonisms between the USA and EU, both turn against the people’s social and national rights. War and aggression are but the other side of the coin of imperialist economic globalization, and NATO is a key player in its strategy of hegemonic domination and persecution of those forces and countries that stand up in opposition.

NATO plays a central role in the militarization of international relations and in the arms race and is the main driving force of conflicts and tensions today. Alluding to Â«new global threatsÂ» – a concept that has replaced the old pretext of the Â«communist threatÂ» – NATO imposes a large-scale escalation of wars and weapons Â of which the war in Afghanistan is a key aspect.

NATO will hold a Summit in Portugal, this November. It seeks to renew its strategic concept, which represents a new and highly dangerous qualitative leap in that Organization’s role, mission and goals.

With its new strategic concept, NATO seeks to put in its written doctrine that which is already a reality in practice: the geographic extension of its intervention and projection of force to the entire planet; the expansion of the nature of its missions to issues such as energy, environment, migrations and internal security of the States; to reaffirm itself as a nuclear military bloc, despite the rhetoric about nuclear disarmament, by envisaging the use of nuclear weapons in military attacks; to further develop the military-industrial complex and military research and demanding an increase in military expenditures from all its members; to include in its missions acts of direct interference and occupation, under the guise of peace-keeping missions; to profound the instrumentalization of the UN in order to pursue its purposes and strength its role as the armed arm of imperialism.

Imperialism appears to be all-powerful but it is not. As the facts are proving, the major threats arising from imperialism’s force-based response to the crisis of capitalism are being confronted by the progressive and even revolutionary struggle of the peoples. In various parts of the world, the peoples are taking into their own hands the defense of their rights and of their countries’ sovereignty and independence. They are resisting in the most diversified ways. They are imposing defeats to imperialism’s strategy of domination.

In this context, expressing our profound conviction that, through the struggle it is possible to defeat the war-mongering and militaristic goals of NATO and build a future of peace, progress, social justice in which each people can freely decide on their own future, inseparable from the struggle for socialism, we the Communist and Workers’ Parties that are signatories to this statement:
Demand an end to the arms race, nuclear disarmament beginning by the major nuclear powers in the world as is the case of the USA, elimination of all chemical and biological weapons and an end to foreign military bases.

Call upon the workers and peoples of the whole world, on the popular and anti-imperialist forces, on the working-class movement and other social organizations to mobilize and strengthen their struggle, for peace, against war and NATO.

We reaffirm our long-standing support for the peace movement.

We congratulate the World Peace Council for its 60th anniversary and for its campaign against NATO. Declare our intention to mark the 65th anniversary of the victory over Nazism and Fascism as an important day of struggle for peace and against the monumental historical distortion that attempts to erase the crucial role of Communists in the liberation of peoples from the yoke of Nazi-fascist and to equate Nazism with Communism.
Reaffirm our solidarity with the peoples that resist imperialism’s occupations, aggressions and interference and that are waging difficult battles for their self-determination and independence, namely the peoples of the Middle East, like the Palestinian, Lebanese and Syrian peoples, and Central Asia.

We demand the immediate withdrawal of all the military forces from Iraq and Afghanistan and from all the other imperialist interventions around the world. Demand the dissolution of NATO and support the peoples’ sovereign right to decide on the disengagement of their countries from this aggressive alliance.

We reaffirm our frontal opposition to the militarization of the European Union and its militarist and interventionist policy, to the expansion of NATO and to the deployment of the new US and NATO "anti-missile shield" in Romania and Bulgaria.

We express our solidarity with the Cypriot people (Greek Cypriots and Turkish Cypriots) in its struggle against the Turkish occupation and for the reunification of its homeland, for a just solution to the Cypriot issue. Demand an end to the provocations and interference in Latin America and Caribbean.

We express our solidarity with Socialist Cuba and with the peoples, the political forces and national governments with a democratic, progressive, popular and anti-imperialist character, such as Bolivarian Venezuela, Bolivia, Ecuador and Nicaragua.

We demand the release of the five Cuban patriots unjustly imprisoned in the USA. We reiterate our support for the struggle of the people of Honduras for democracy and against the coup regime, so that the people may determine the future of their country.

We demand the recall of the Fourth US Fleet deployed to South and Central America and the closing down of US military bases in the region, namely Guantanamo and the bases in Colombia.

We denounce the USA’s military intervention in Haiti and we demand from the United Nations that the Haiti mission be civilian in nature. We demand that the actions of solidarity and cooperation with the Haitian people contribute to the strengthening of the independent national State and to the economic and social progress in the Country.
Express our solidarity with the peoples of Africa in their struggle for the right to development and with the people of Western Sahara for their right to self-determination. We demand an end to imperialist interference and militarization of the continent, namely in Somalia and its shores, in the whole region of the Horn of Africa, in the Democratic Republic of the Congo and in Sudan.
We reaffirm our commitment to continue the struggle against the US military Command for the continent (AFRICOM). Express our support for the peace movement, the class-based trade union movement, the youth, women and other organizations which, in Portugal, are promoting the campaign for peace and against NATO.

We pledge to do everything we can to support and mobilize for the actions of struggle against NATO and its new strategic concept which are scheduled for November of this year in Portugal. 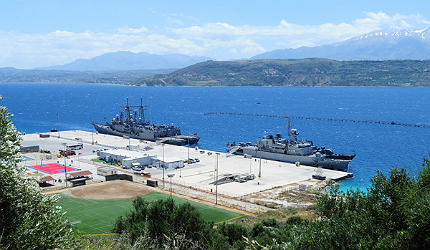 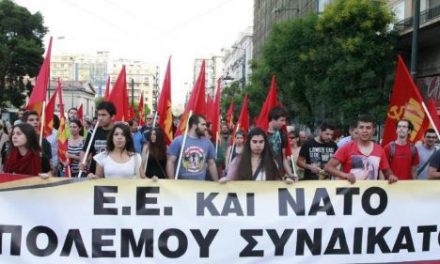 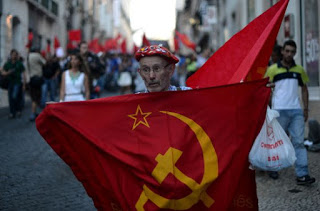