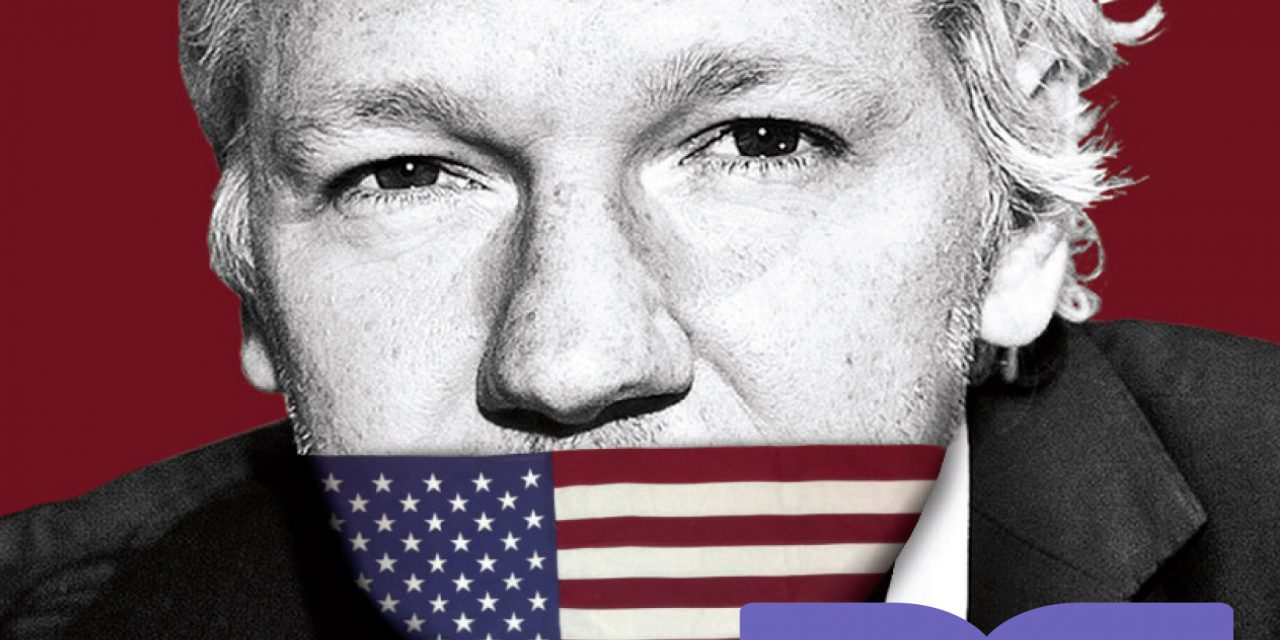 Recently,   Aymeric Monville, the French publisher of Delga Editions  and the author of Julian Assange en Danger de Mort, visited England to investigate the situation of Assange, the imprisoned head of Wikileaks.  Afterwards Monville wrote an article, “Conflicts of Interest in the Assange’s Defense:  We Are Waiting for Explanations” in the on-line journal Initiative Communiste.

In 2010 Assange and Wikileaks released 250,000 diplomatic notes and 500,000 documents showing the crimes committed by the American army in Iraq and Afghanistan.  In 2012, the Swedish government charged Assange with sexual assault, and the British government arrested and then released him on parole. While on parole, Assange took refuge in the Ecuadorian embassy, where he remained until April 11, 2019, when the embassy turned him over to British authorities.  On May 1, 2019 the British courts sentenced Assange to fifty weeks in prison for violating the terms of his  parole.  On November 19, 2019, the Swedish prosecutors dropped all charges against Assange because of the lack of evidence.  Meanwhile, Assange remains in prison, while the U.S. pursues his extradition to stand trial for treason, where he could face 175 years in prison or the death penalty.

Monville points out that in many past political cases, the defense has pursued a disruption defense ( “defense de rupture“) rupture,” that is, a challenge to the legitimacy of the courts and an appeal over the head of the court to the court of public opinion.  Readers of this web site will be familiar with the self-defense  of Dimitrov  in the Reichstag Fire Trial or the defense of the Scottsboro Boys. Despite the highly political nature of the Assange case, his lawyers have not done this, but instead have seemingly accepted much of the judicial and legal framework and confined their  defense of Assange to the courtroom only.

Other aspects of Assange’s legal situation seem somewhat irregular.  For example, there is the  utter silence of Assange’s defense” with regard to the breach of parole charge.  Apparently, “the lawyers had given up appealing against Assange’s imprisonment for breach of parole due to a strange lack of preparation time and resources.”  According to Monville, “this refusal to appeal even sparked ironic comments from the judge in the case, Judge Baraister  last September.”

Most disturbing of all is the lack of attention to Assange’s health.  According to Monville, Assange is suffering from “torture by isolation.”  United Nation’s expert on torture, Nils Melzer, and the British diplomat, Craig Murray, who investigated torture in Uzbekistan, concluded that “Assange is being tortured in front of our very eyes.”  On October 21, Assange had difficulty even remembering the date of his birth.

It would seem that the most important aim of Assange’s legal team would be “to preserve what is most important, starting with the physical and mental integrity of the client.”   Monville says, “We can only approve of the request made by [attorney] Gareth Peirce … on November 18 to provide Julian Assange with a functioning computer. Was there, however, no room for further requests?  And why has nothing been done by the defense to free Assange for health reasons, although it was deemed possible for dictator Pinochet.”

Monville is not alone in raising concerns about Assange’s legal situation.  Nils Melzer, the United Nations Rapporteur on torture, has pointed to a number of irregularities.  For example, Assange is in prison for parole violations, but in Great Britain parole violations rarely if ever result in prison terms.  Moreover, Assange has not been given access to legal documents to help prepare his defense.  This is not normal.  Also, one of the eighteen charges against Assange for which the U.S. is seeking his extradition (the only one made public) is unsuccessfully attempting to help Chelsea Manning decode a password.   Melzer is astounded that such a trivial act could constitute grounds for extradition.  (Democracy Now!, November 22, 2019.)

On November 26, the New York Times reported that 60 doctors appealed to Britain’s home secretary, Priti Patel, to transfer Assange from prison to a university teaching hospital for an expert medical assessment.  The doctors said, “Were such urgent assessment and treatment not to take place, we have real concerns, on the evidence currently available, that Mr. Assange could die in prison.”  The doctors concluded,  “The medical situation is thereby urgent. There is no time to lose.”

Debt, Greece, and the Fightback