Editors’ note: Written in October 1916, Lenin sought to explain in Imperialism and the Split in Socialism, the material  basis for the fact that  in August 1914 working-class parties in the  Second International — with the honorable exception of the  Bolsheviks and a few others — repudiated their own antiwar policies,  caved in to war hysteria and voted to line up behind “their own”  capitalist governments and went to war. The opportunist surrender of  the German  Social  Democratic  Party,  considered the strongest and most theoretically developed working-class party,  was especially shocking.  To this day, social reformist parties and movements continue to be weak in their opposition  to imperialism.

Is there any connection between imperialism and the monstrous and disgusting victory opportunism (in the form of social-chauvinism) has gained over the labour movement in Europe?

This is the fundamental question of modern socialism. And having in our Party literature fully established, first, the imperialist character of our era and of the present war[1] , and, second, the inseparable historical connection between social-chauvinism and opportunism, as well as the intrinsic similarity of their political ideology, we can and must proceed to analyse this fundamental question.

We have to begin with as precise and full a definition of imperialism as possible. Imperialism is a specific historical stage of capitalism. Its specific character is threefold: imperialism is monopoly capitalism; parasitic, or decaying capitalism; moribund capitalism. The supplanting of free competition by monopoly is the fundamental economic feature, the quintessence of imperialism. Monopoly manifests itself in five principal forms: (1) cartels, syndicates and trusts—the concentration of production has reached a degree which gives rise to these monopolistic associations of capitalists; (2) the monopolistic position of the big banks—three, four or five giant banks manipulate the whole economic life of America, France, Germany; (3) seizure of the sources of raw material by the trusts and the financial oligarchy (finance capital is monopoly industrial capital merged with bank capital); (4) the (economic) partition of the world by the international cartels has begun. There are already over one hundred such international cartels, which command   the entire world market and divide it “amicably” among themselves—until war redivides it. The export of capital, as distinct from the export of commodities under non-monopoly capitalism, is a highly characteristic phenomenon and is closely linked with the economic and territorial-political partition of the world; (5) the territorial partition of the world (colonies) is completed.

The fact that imperialism is parasitic or decaying capitalism is manifested first of all in the tendency to decay, which is characteristic of everymonopoly under the system of private ownership of the means of production. The difference between the democratic-republican and the reactionary-monarchist imperialist bourgeoisie is obliterated precisely because they are both rotting alive (which by no means precludes an extraordinarily rapid development of capitalism in individual branches of industry, in individual countries, and in individual periods). Secondly, the decay of capitalism is manifested in the creation of a huge stratum of rentiers, capitalists who live by “clipping coupons”. In each of the four leading imperialist countries—England, U.S.A., France and Germany—capital in securities amounts to 100,000 or 150,000 million francs, from which each country derives an annual income of no less than five to eight thousand million. Thirdly, export of capital is parasitism raised to a high pitch. Fourthly, “finance capital strives for domination, not freedom”. Political reaction all along the line is a characteristic feature of imperialism. Corruption, bribery on a huge scale and all kinds of fraud. Fifthly, the exploitation of oppressed nations—which is inseparably connected with annexations—and especially the exploitation of colonies by a handful of “Great” Powers, increasingly transforms the “civilised” world into a parasite on the body of hundreds of millions in the uncivilised nations. The   Roman proletarian lived at the expense of society. Modern society lives at the expense of the modern proletarian. Marx specially stressed this profound observation of Sismondi.[7] Imperialism somewhat changes the situation. A privileged upper stratum of the proletariat in the imperialist countries lives partly at the expense of hundreds of millions in the uncivilised nations.

Advancing this definition of imperialism brings us into complete contradiction to K. Kautsky, who refuses to regard imperialism as a “phase of capitalism” and defines it as a policy “preferred” by finance capital, a tendency of “industrial” countries to annex “agrarian” countries.[2] Kautsky’s definition is thoroughly false from the theoretical standpoint. What distinguishes imperialism is the rule not of industrial capital, but of finance capital, the striving to annex not agrarian countries, particularly, but every kind of country. Kautsky divorces imperialist politics from imperialist economics, he divorces monopoly in politics from monopoly in economics in order to pave the way for his vulgar bourgeois reformism, such as “disarmament”, “ultraimperialism” and similar nonsense. The whole purpose and significance of this theoretical falsity is to obscure the most profound contradictions of imperialism and thus justify the theory of “unity” with the apologists of imperialism, the outright social-chauvinists and opportunists.

We have dealt at sufficient length with Kautsky’s break with Marxism on this point in Sotsial-Demokrat and Kommunist.[8] Our Russian Kautskyites, the supporters   of the Organising Committee[3] (O.C.), headed by Axelrod and Spectator, including even Martov, and to a large degree Trotsky, preferred to maintain a discreet silence on the question of Kautskyism as a trend. They did not dare defend Kautsky’s war-time writings, confining themselves simply to praising Kautsky (Axelrod in his German pamphlet, which the Organising Committee has promised to publish in Russian) or to quoting Kautsky’s private letters (Spectator), in which he says he belongs to the opposition and jesuitically tries to nullify his chauvinist declarations.

It should be noted that Kautsky’s “conception” of imperialism—which is tantamount to embellishing imperialism—is a retrogression not only compared with Hilferding’s Finance Capital (no matter how assiduously Hilferding now defends Kautsky and “unity” with the social-chauvinists!) but also compared with the social-liberal J. A. Hobson. This English economist, who in no way claims to be a Marxist, defines imperialism, and reveals its contradictions, much more profoundly in a book published in 1902[4] . This is what Hobson (in whose book may be found nearly all Kautsky’s pacifist and “conciliatory” banalities) wrote on the highly important question of the parasitic nature of imperialism:

Two sets of circumstances, in Hobson’s opinion, weakened the power of the old empires: (1) “economic parasitism”, and (2) formation of armies from dependent peoples. “There is first the habit of economic parasitism, by which the ruling state has used its provinces, colonies, and dependencies in order to enrich its ruling class and to bribe its lower classes into acquiescence.” Concerning the second circumstance, Hobson writes:

“One of the strangest symptoms of the blindness of imperialism [this song about the “blindness” of imperialists comes more appropriately from the social-liberal Hobson than from the “Marxist” Kautsky] is the reckless indifference with which Great Britain, France, and other imperial nations are embarking on this perilous dependence. Great Britain has gone farthest. Most of the fighting   by which we have won our Indian Empire has been done by natives; in India, as more recently in Egypt, great standing armies are placed under British commanders; almost all the fighting associated with our African dominions, except in the southern part, has been done for us by natives.”

The prospect of partitioning China elicited from Hobson the following economic appraisal: “The greater part of Western Europe might then assume the appearance and character already exhibited by tracts of country in the South of England, in the Riviera, and in the tourist-ridden or residential parts of Italy and Switzerland, little clusters of wealthy aristocrats drawing dividends and pensions from the Far East, with a somewhat larger group of professional retainers and tradesmen and a larger body of personal servants and workers in the transport trade and in the final stages of production of the more perishable goods: all the main arterial industries would have disappeared, the staple foods and semi-manufactures flowing in as tribute from Asia and Africa…. We have foreshadowed the possibility of even a larger alliance of Western states, a European federation of Great Powers which, so far from forwarding the cause of world civilisation, might introduce the gigantic peril of a Western parasitism, a group of advanced industrial nations, whose upper classes drew vast tribute from Asia and Africa, with which they supported great tame masses of retainers, no longer engaged in the staple industries of agriculture and manufacture, but kept in the performance of personal or minor industrial services under the control of a new financial aristocracy. Let those who would scout such a theory [he should have said: prospect] as undeserving of consideration examine the economic and social condition of districts in Southern England today which are already reduced to this condition, and reflect upon the vast extension of such a system which might be rendered feasible by the subjection of China to the economic control of similar groups of financiers, investors [rentiers] and political and business officials, draining the greatest potential reservoir of profit the world has ever known, in order to consume it in Europe. The situation is far too complex,   the play of world forces far too incalculable, to render this or any other single interpretation of the future very probable; but the influences which govern the imperialism of Western Europe today are moving in this direction, and, unless counteracted or diverted, make towards such a consummation.”… 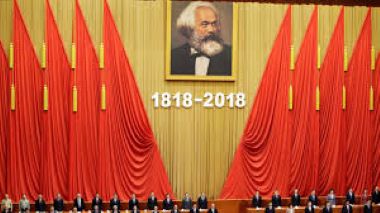 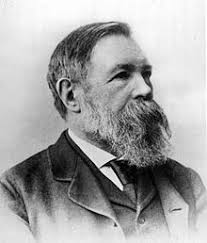 From the Classics Engels’ Socialism: Utopian and Scientific