Gustave Courbet: the Working Class Becomes the Subject of Art 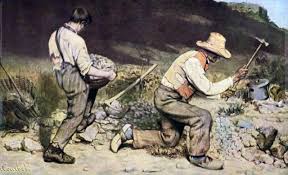 On the 200th anniversary of Gustave Courbet’s birth, Jenny Farrell looks at his revolutionary choice of theme and form, called ‘socialist propaganda’ by his critics

A constant feature of any news programme in the capitalist world is “Business News” and reports from the stock markets.  Those who toil to create the profits are always absent from the story. This is particularly apparent to me because I grew up in the German Democratic Republic, and at school even our literature books always included paintings with a working-class or socialist subject matter. Some of these left an indelible impression on me, so much so that I still think of them and occasionally look at them even all these decades later. One of these paintings is Gustave Courbet’s Stone Breakers.

Let me put this painting into its context. The French July Revolution of 1830 ushered in the July Monarchy and coincided with increased industrialisation. Actual state power was in the hands of those elevated socially by this industrial upheaval – in the hands of the financial aristocracy, the owners of coal and ore mines. Dissatisfaction fermented in the French proletariat and spread to other large sections of the population. In February 1848, the bourgeois democratic revolution broke out, overthrowing the Monarchy and proclaiming a Republic.

The involvement of all democratic forces in this social upheaval led to a great flourishing of realism in art and literature. Like Balzac in his novels, so too did painters try to represent this new reality in their work. The proletariat became a very real subject in art. As soon as it had emerged, the working class suffered ruthless exploitation and rebelled against it. Workers’ uprisings in Lyon in 1831 and 1834 echoed throughout France and led to a powerful socialist movement. The life of the proletariat increasingly attracted the interest of many artists. The working class, fighting for its physical survival, had very little visual art of its own in the 19th century. Bourgeois painters at best looked on workers with compassion and sentimentality. Only the most important realists, artists of the people, like Courbet, recognized the power of this new class as early as the 19th century.

Gustave Courbet, born 200 years ago on 10 June 1819, programmatically demanded the objective portrayal of reality in art, unconditional truth. In 1851, he exhibited two paintings at the Salon, the great annual art exhibition in Paris, which were to revolutionise art. They were his paintings Stone Breakers and A Burial at Ornans. No one before him had shown labourers at work so forcefully and honestly. No one before him had depicted peasant faces so realistically. No one before him had portrayed ordinary people at such a large scale, at a time when genre painting was small and history painting large. Courbet was painting history, in a new sense of the word.

Courbet’s art shocked the bourgeois viewers. Some were enthusiastic, but most were outraged. Courbet, however, firmly believed in the historic importance of his realism. At the 1855 Salon, he exhibited his paintings in an improvised wooden cabin. Above the entrance door, it read “Realism, G. Courbet”. The catalogue of his exhibited paintings was an artistic programme committed to reality. This exhibition made Courbet famous. He said that to “translate the customs, the ideas, the appearance of my epoch according to my own appreciation; in a word, to create living art, that is my goal.”

Stone Breakers was a revelation. Critics accused him of socialist propaganda. Courbet, however, proudly stood by his work. In the catalogue of the 1855 exhibition, he wrote “The title Realist was given to me, in the way the painters of 1830 were called Romantics.” His statement “Realism is essentially democratic art” applied supremely to Courbet. He was the great democrat of painting and became the leader of the Realist movement.

Participating in the Paris Commune, Courbet was responsible for the protection of Parisian art treasures. Later, the bourgeoisie accused him of destroying the Vendôme Column. He was imprisoned, the State seized his property, and put his friends and family under surveillance. In bad health and fearing further repercussions, Courbet emigrated to Switzerland. There he died, aged 58.

Courbet painted Stone Breakers in his hometown of Ornans, in eastern France, in 1849. He was 30 years old. Marx and Engels had published the Communist Manifesto the previous year, stating as its opening fanfare “The history of all hitherto existing society is the history of class struggles” and “Society as a whole is more and more splitting up into two great hostile camps, into two great classes directly facing each other – Bourgeoisie and Proletariat.” This is the defining insight of the mid-19th century.

Stone Breakers was the first of Courbet’s great realistic works. It was destroyed during the bombing of Dresden in 1945. It depicts two roadside labourers, in almost life-size: 170 cm × 240 cms. The labourers take up the greatest part of the picture, emphasising the fact that they are the central figures and protagonists. With the very recent proletarian uprisings of 1848, Courbet’s focus on the common people was radical. This image of two men, one only starting out in a life of hard labour and the other towards its end, expresses unrelenting hardship. Despite their arduous toil, these men just barely survive. Their clothes are badly torn and patched. The colours in which they are painted blend with their place of work – the palette is dominated by shades of greys, bleached blues, earthy whites and browns. Rough brushstrokes translate the coarseness of the men’s clothing and their surroundings into tangible reality. There is no attempt to prettify the image by giving it a polished appearance, as would have been the painterly norm at Courbet’s time. This is a radical new departure, in theme and form.

The older man’s red striped waistcoat near the centre of the picture stands out. It is a statement of dignity and suggests the colour of the working class. However, apart from that, combined with his white shirt and blue socks, this worker subtly displays the colours of the tricolour, the French flag as it emerged in the Revolution of 1789. These colours once represented liberty, equality and fraternity. What have they come to mean 60 years later, in this bleached and torn form? This is without doubt a deliberate irony on the part of Courbet, especially as they adorn the older man, aged about 70, according to Courbet. Courbet’s grandfather had been a sans-culotte in 1789.

The two figures are etched sharply against a dark background, themselves throwing shadows that nearly merge with that of the low hill. Only in the upper-right corner of the picture is there a patch of blue sky. The maturity of the corn behind them indicates early summer, as does the heat of the blazing sun. A large pot and a single spoon directly next to their work place tells us that their whole life revolves around their labour. It also suggests that they are related. They eat on the side of the road; there is no private space.

We cannot make out the face of either man. The older man’s face is in profile but only the lower part of it is visible under the straw hat, which casts a shadow over it. The younger man, lifting the broken stones, has his back turned. By not showing the faces clearly, Courbet focuses the viewer on the labour and its conditions, not appealing for sympathy but insight, in an almost Brechtian de-individualisation which prevents unreflective emotional involvement.

Courbet uses a similar technique in his great painting of women at work, The Winnowers. Here too, earthy reds, off-whites and blue dominate the palette. As in Stone Breakers, the central figure is adorned in red – here much more obviously so. Again, faces are either turned away, as in the main figure, looking down, or obscured by shadow, preventing eye contact with the viewer and thereby individualisation.

Once more, the workers are shown at work, in the workplace, surrounded by the produce of their work. And once again, we see the lunch vessel in the picture – here at the centre back with a ladle, and another one beside the sacks. The pots, plate, bowls, sacks echo the shape of the sieve, held up by the central figure in an energetic movement that contrasts with the more weary impression of the woman on her left. This tool is at the centre of the picture. Similarly to Stone Breakers, the workers toil in close proximity, but there is little connection or communication between them. All focus is on the labour. The unity of the composition is achieved by earthy colours, underlining the characters’ relationship with the soil, and by the many elliptical or round shapes uniting them.

The figures in both paintings express the lifelong toil of the working class, and its impoverished condition. Their anonymity allows us to generalise, to see them as a class. There is no sentimentality, and no idealisation. The artist conveys his sympathy for the workers, their dignity and his disgust for a system that thrives on such poverty and exploitation. Gustave Courbet was one of the first painters to make the life of workers the subject of realistic art.

Jenny Farrell was born in Berlin. She has lived in Ireland since 1985, working as a lecturer in Galway Mayo Institute of Technology. Her main fields of interest are Irish and English poetry and the work of William Shakespeare. 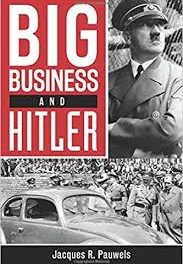 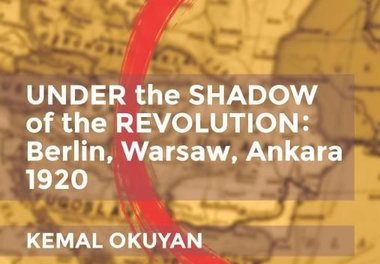 Book Review: Under the Shadow of the Revolution: Berlin-Warsaw-Ankara 1920 by Kemal Okuyan