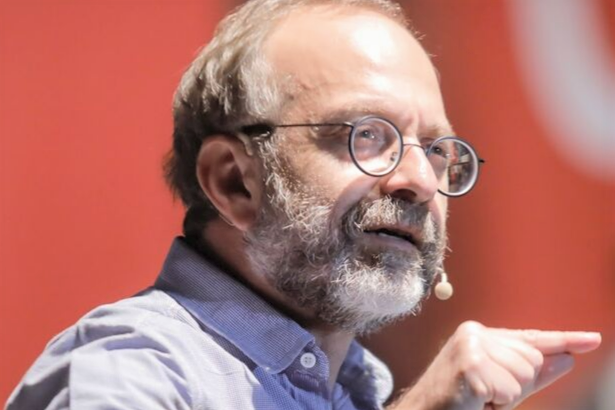 September 21, 2019
“We could be living in an entirely different world today. Humanity could be striking the final deathblow to imperialism now… if those mistakes  had not been made.” soL news interviewed TKP Secretary-General Kemal Okuyan on his latest book
  

The Secretary-General of the Communist Party of Turkey (TKP), Kemal Okuyan’s new book titled ‘Devrimin Gölgesinde: Berlin, Varşova, Ankara 1920 (Under the Shadow of Revolution: Berlin, Warsaw, and Ankara 1920)’ was published by Yazılama Publishing House. In his recent work, Okuyan looks at the long year of 1920 through the history of three cities on which the shadow of revolution falls, Berlin, Warsaw, and Ankara.

Taking the readers to a hundred year ago, Okuyan questions the causes of the great defeat of the revolution in the triangle of Berlin, Warsaw, and Ankara. He seeks to answer the question of why the revolution defeated in these three cities, where the revolutionaries watched even the smallest development with great care.

He narrates a fraction of history when the world was shaken by the roar of the working people and various struggles for independence were carried out against the imperialist rampancy right after the Tsar was overthrown and the Bolsheviks came to power in Russia, attempting to light the way for the struggle of today and tomorrow.

Okuyan answered the questions of Hatice İkinci from soL news on his latest book:

Your book focuses on the year 1920. What makes that year so special?

That year was right after a period of time that had been as dark as pitch for humanity. The World War I between 1914 and 1918 did not only mean the death, injury, and uprooting of millions of people; it also showed how imperialism could carry the world into a blood bath, a barbarism. The war occurred between two imperialist camps and whoever that had won would have carried out the same barbarism. The bloc led by England won and what a dark world they designed! The two treaties signed after the war sum up everything: The Versailles and the Sevres proved that, when allowed, imperialism would not even leave a bit of justice and freedom.

1920, therefore, was the most critical year when it was shown that this would not be allowed. The resistance emerged in Russia in 1917 when the war was still on and it spread quickly. It turned into a world movement not in order to fix an injustice in imperialism but in order to entirely extinguish imperialism, the capitalist exploitation itself. The year 1920 was a year when the future of this movement was determined. The foundation process of a social order without classes and exploitation continued in Soviet Russia, but it did not spread to Germany or other European countries. In Turkey, however, the revolution took hold, it triumphed but remained inside the bourgeois boundaries.’

Do you think we are getting closer to a breaking point similar to 1920?

Humanity is not on the ground of 1920, but I believe we are getting closer to rather a counterpart of 1914. The imperialist system is floundering inside a huge crisis with no exit. There is the danger of war. There is no future for billions of people. If the European workers had managed to avoid the influence of social democrat leaders who first ignored and then shared the responsibility for this course of events in 1914, if they had taken their future into their own hands, neither the World War I would be so devastating nor the independence would be limited to Russia.

After that, in 1920, there was another opportunity, but humanity let the exploiting classes slip through their fingers for various reasons and we are paying the price for that today. Think about it: This could have been done and we could have a world where we lived in equality, prosperity, and brotherhood. Look at us now.

Capitalism forced into the 20th-century fascism, World War II, mass murders with the atomic bomb, regional conflicts, environmental disasters, racism, femicides, and every type of disgrace imaginable. Yes, humanity is closing in on a breaking point and there is no escape from that. And some people say that everything will be all right! Nothing can be all right in this social order; they cannot fool people. The 20th century and the 21st century as its remainder are proof of what can be in this social order. I think we must study well the lessons of 1920 since this might be the last opportunity for us.

I was about to ask a question on that: For example, the events before and after the local elections on March 31 in Turkey and all those things tried to be sold as a reason for “a united front against the AKP”… Did all those discussions influence the timing of the release of the book?

This book was a very old project, but other things kept interfering with it and books gave birth to other books. While preparing a book which presented the de-facto logic of the phenomenon of “revolution”, I realized how little the year 1920 was discussed and decided to work on a book about that. Nevertheless, what happened recently surely influenced the content of the book.

There are a plethora of honest, patriotic, revolutionary people in Turkey who set their hearts on the CHP. They are doing wrong. There is also a perception as such: “Social democracy is a good thing, so we need to turn the CHP into a real social democrat party.” Another antagonist in my book is “the real social democracy”. Those who wonder may take a closer look! It was social democracy who rescued imperialism, who relieved it of the hands of the German proletariat in 1920. Ebert, Scheidemann, and others…

Then let me rephrase the question so that you can elaborate: If there had been an organized communist party in Germany in 1918, how would the world be formed? How would that influence the daily life of the working people?

The working class came really close to power in Germany after late 1918. They seesawed, so to speak. A communist party with similar features to the one in Russia in those days would not leave the governing power to social democracy who were in alliance with German generals. The start of the foundation of socialism in Germany would mean changes in the whole balance in Europe, therefore in the entire world. Nobody would be able to stop the change that started from the Soviet Union and Germany – and this  is not an exaggeration. Uphill struggles would continue, but I assure you that the world would have been an entirely different place, positively, today, after a century. We could have been hitting the final deathblow to imperialism today.

Several chapters in the book were spared for the Soviet-Polish war in 1920. I would like to ask a general question in this regard: When a country is in war with or under the invasion of another country, is it possible to prevent the national character from interfering?

In the core of a war between two capitalist states is the competition and contradiction between the two ruling classes. However, you cannot order millions of poor to slaughter one another for the interests of the capitalists. National interests and nationalistic ideologies come into play here and they land on an already-prepared ground. During the defense of a country against an imperialist invasion or attack, the very same ground becomes a source of a positive kind of energy. Even though they have completely different characteristics, both patriotism and nationalism grow and flourish on that same ground.

These are really complicated processes. The war between Poland and Soviet Russia was one between two different social orders. And it must be remembered that Poland was a part of the Russian Empire which started to disintegrate towards the end of World War I. The Polish nationalism has very strong roots.

The Red Army, on the other hand, was of a multi-national character and was the army of the workers and the peasants with an up-front class facet. I think it was a sad misfortune that the Russian nationalism found a place among the ranks of the Red Army while fighting Poland. This war took place in 1920 which was the most crucial turning point of the struggle between labor and capital. The Russian nationalism was one of the reasons, which I think to be political, that the Red Army was defeated at the gates of Warsaw.

You say: “The flirting of the movements representing revolution and counterrevolution around the concept of nation always means dancing on a minefield for revolutionists.” Does it have to be like this all the time? Maybe the revolutionists can convert nationalists during the shared struggle?

It is imperative that communists convert workers shaped by or under the influence of nationalism. This is inevitable. That, however, must not turn into a sort of alliance or articulation. It is high time that every type and I highlight, every type of nationalism be avoided. In this respect, we live in a different world from that of a hundred years ago.

“One of the most crucial principles of the revolutionary struggle is to feel the workers’ state of mind – remaining unalienated to that state without surrendering to it.” You are talking about a balance on a really thin line. Do you think it is possible to establish that balance by staying dependent upon the reality of the country today?

You cannot do anything in spite of the state of mind of the working people. To put it simply, if the great majority of the masses do not demand a change of the social order, you cannot change it through one method or the other. One must acknowledge this reality. However, if one gives up or puts off the aim of the change of the order with this perspective, this will be a mistake for two reasons. First, revolutionists are obliged to convince, mobilize, and organize the masses for the change of order. Giving it up means handing in the large masses to the hands of darkness. Second, incredibly radical changes may occur in the masses’ state of mind in days only. The way to be ready for this is to stay away from mediocrity and populist flattering.

I read your book in a very short time and with huge enthusiasm. Are there any plans for new books now?

I don’t have the luxury to think: “Now, I’ll take some time for myself and write a book.” We cannot write books by stealing the time we must devote to party work. No doubt, writing books is also an aspect of the struggle, but still, there is an “individual” side to it. Apart from that, each and every one of us writes or contributes to columns, reports, circulars, statements, or leaflets as a requirement of our responsibilities. So, I don’t know when the books in my mind will be completed. Nonetheless, we are planning to release in a very short time Ülkeyi Devrimle Buluşturmak (Uniting the Country with Revolution) which we think to be a necessity for our struggle and which is also a sequel to In the Shadow of the Revolution.