Imperialism Has Evolved, but Still Rules the World

Imperialism, the eminent Marxist historian Victor Kiernan observed, displays “itself in coercion exerted abroad, by one means or another, to extort profits above what simple commercial exchange can procure.”

The wars of 1914 and 1939 are the outstanding examples of what happens when that international system of extortion breaks down, when its normal methods of treaty, cartel, secret agreement, small colonial conflicts, coup, bribery and monopoly understandings no longer suffice.

That was not widely understood by the workers’ movement in 1914. Many of the foundational texts of the marxist tradition on imperialism — above all the books by Lenin and Bukharin — were unwritten as of August 1914.

In particular, the idea that colonialism and industrial monopoly were sort of optional extras, which capitalism could adopt or discard at will (or under pressure) was widespread — and so too was the view that imperialism could actually have beneficial consequences all round, if properly and humanely managed.

Other, more advanced views, were of course around in the working-class movement. Rosa Luxemburg had written her flawed masterpiece The Accumulation of Capital and Rudolf Hilferding’s Finance Capital had also laid the foundations of the emerging marxist outlook on imperialism.

Karl Radek acutely observed in 1912 that “modern imperialism is not a chase after phantoms, after a purely platonic world rule, but a policy of capitalism in its deepest phase, which seeks spheres of investment for capital threatened by the sinking profit rate.” Alas, such insights did not set the course for the international labour movement of the time.

Today we are, or ought to be, better advised. and indeed anti-imperialism now sits at the heart of any serious progressive politics. For this, we have in large part to thank George Bush and Tony Blair — but the underlying and unwelcome fact is that imperialism still exists, a century after 1914, and indeed it constitutes the dominant system in the world today.

Inevitably the question arises as to whether the world is today once more on the eve of a 1914, of a world war. Indeed, even the Financial Times and other bourgeois journals have taken up speculating along such lines.

The dissimilarities are profound and important. No power in 1914 exercised anything like the relative and absolute power of the Us today. Britain, the strongest single power of the time, had limited political purchase on continental Europe, as became all too clear, and was challenged by competitors almost everywhere. Its army was of secondary consequence.

Today, the US is in a far more commanding position in spite of the accumulating indications of an imperial retreat and of difficulties in imposing its will, in the Middle East especially.

It girdles the world with its bases, home to armed forces as powerful as those of the next 10 states combined.

It ultimately controls the main instruments of inter-imperialist mediation and control, like Nato and the IMF. It gives its own legal judgements a daring extra-territorial reach. In short, it bears some of the hallmarks of a super-imperialism, even in its autumn of a relative decline as the predominant economic power.

Second, the elements of ultra-imperialism, rightly derided by Lenin in the midst of the Great War as the extrapolations of cowardly opportunism, are far stronger in today’s world.

Underpinned by a wave of the internationalisation of capital even more profound than that which preceded 1914, and given a structure through institutions like the IMF, the WTO, the EU and so on, the interlocking of the interests of the traditional big powers is far more advanced than in Lenin’s time. As a result, the standing of nation states vis-a-vis the imperialist world system as a whole is different, and the possibilities of conflict between major powers reaching the pitch of arms is accordingly circumscribed.

This is not to suggest a bland harmony now prevails in the US-led bloc — the brutal “fuck the EU” attitude of Us neoconservative diplomat Victoria Nuland at the height of the Ukraine crisis is one example of the tensions, and the spying row rocking relations between Berlin and Washington is another. But these arguments within the “world order” will not lead to war.

The sharper contradiction is between that world order managed and maintained by US power and those big powers which stand to a significant extent outside it. There are two — Russia and China.

It requires no special insight to see that the next imperialist war will almost certainly arise from a conflict between one or other of these two powers and a US-led alliance.

It’s not all clashes, of course. Russia and the US are united in supporting the sectarian Maliki government in Baghdad and the military dictatorship in Cairo. China funds the US budget deficits by buying dollars. Nevertheless, the main trend in their relations is towards growing confrontation.

Russia remains broadly an “outsider” in the world order, despite considerable efforts to get inside the great power tent — symbolised by Moscow’s brief conversion of the G7 into a G8. It therefore challenges the power of the US, the EU and Nato where such a challenge seems to correspond to the interests of its own ruling elite.

Thus it has supported Bashar al Assad in Syria, Russia’s main arab ally and a major buyer of Russian arms, just as it moved to protect its Black Sea Fleet base from Washington’s Kiev surrogates by annexing the Crimea earlier this year, a move undoubtedly supported by the great majority of residents on the peninsula.

Some on the left argue that Russia, while undoubtedly capitalist, is not itself imperialist. The structure of restored Russian capitalism, based on a high degree of oligarchic monopolisation and driven to secure or renew economic connections with other former Soviet republics in the shape of a new economic bloc argues otherwise. So too does the behaviour of Putin over the civil war in eastern Ukraine where, in the words of the Financial Times, “Maintaining economic links with important Ukrainian enterprises” has dictated his apparent vacillation in the face of Nato pressure.

Russia’s role as a challenger to global US hegemony and the legitimacy of many national demands arising from the break-up of the Soviet Union, may often mandate contingent support for the positions of the Putin government, but they should not blind the left to its essential class nature (nor its corrupt, oligarchic and repressive practice), nor lead to the discarding of fundamentals of marxist political economy for expedient reasons.

In the medium term the greater danger of war seems to lie in the Pacific, where China’s drive to expand its power and influence is now bumping up against the entrenched position of the US, buttressed by a network of alliances and bases and reinforced by Barack Obama’s much-trumpeted “pivot” of Us military assets to the region.

This conflict is of course occurring in the most heavily populated region in the world with the fastest-growing economies. It is also the region where the working class is growing in numbers at an exponential rate and therefore will surely become the decisive battleground in the struggle for socialism in the 21st century, as Europe was 100 years ago.

The US “pivot” to the Pacific is obviously designed to preserve the hegemonic position it acquired in the course of World War II in the region. Alongside Washington’s own force projection its main allies, Japan and south Korea, have been taking increasingly aggressive and nationalistic positions directed against China.

At the same time, the sharpest confrontation this year has been between China and Vietnam, two nominally socialist countries. Vietnam is also the only neighbouring state in dispute with China which is not bound to the US by some form of military agreement.

A recent article in Time magazine speculated on imminent war between China and the US based in part on China’s new missile capabilities, which have the potential to destroy US aircraft carriers, for long the Pentagon’s pride and joy.

Two points are clear from this snapshot of today’s world. First, escalating conflict is rooted in the capitalist nature of the great powers, with nationalism, chauvinism and an imperial mentality unavoidable handmaidens, and this will once again lead to war unless it can be prevented by mass action of the people.

Second, the main driver of war lies in the policy of the US and the imperialist world order it has created to further its leading business interests, and those of its capitalist allies, Britain pre-eminent among them.

It is against this predatory world order that progressives must unite and mobilise, dealing with contradictory cross-currents and diverse complex specific issues in that context. There is no way to renew the world advance to socialism without its defeat.

This also appears in the special issue of the Morning Star newspaper marking the anniversary of the start of the First World War and published jointly with Junge Welt in Berlin,  Arbejderen in Copenhagen and Lëtzebuerger Vollek in Luxemburg. 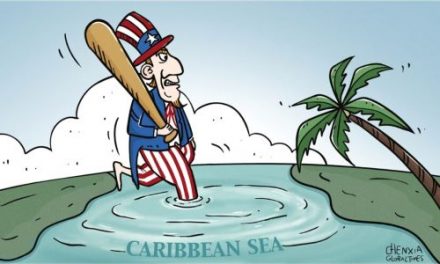