In Defense of KKE, a Reply to Sotiris

Editors’ Note: At the Socialist Project web site <<http://www.socialistproject.ca/bullet/829.php#continue>> Panagiotis Sotiris has written two lengthy essays on "The Greek Crisis and the Left Response."Â  (1) Beyond ÂRealismÂ:Â  Greece, the challenges for the Left and the need for a radical strategy" andÂ  (2) "Exit From the Eurozone. The elephant in the room or why we cannot have socialism based upon EFSF [European Financial Stability Facility] recapitalization"

Panagiotis Sotiris teaches social theory and social and political philosophy at the Department of Sociology of the University of the Aegean. This text is based on two presentations at the ÂMarx is a MustÂ Conference in Berlin (9-11 May 2013), organized by the Marx 21 network, and first published on his blog at lastingfuture.blogspot.gr.

Of greater interest, we believe, is the succinct reply to his essays by Miguel Figueroa, General Secretary of the CP of Canada, which you can read below.

Where have we heard this before?

Reading "The Greek Crisis and the Left Response" by Panagiotis Sotiris, one cannot but agree with its main theses: (1) the direct and inescapable connection between the deepening crisis in Greece and its continuing servitude to the EU monopolists and bankers; and (2) the need therefore for the Greek working class to sharply criticize SYRIZA’s pathetic pro-Eurozone position, and make a strategic break with its (il)logic.

But there is nothing new here – this is precisely the position of none other than the Communist Party of Greece (KKE).

Indeed, the KKE has made a far more comprehensive and clear analysis of the nature and role of the EU as a capitalist/imperialist project to consolidate and centralize European capital, to intensify the drive to destroy the ‘social contract’ and impose brutal concessions on the working class in both the "north" and "south" of Europe (not to mention those in eastern Europe!), and to use the troika as a crude hammer to make the workers pay for the current crisis.

The fact that Sotiris does not even acknowledge the KKE’s consistent and militant anti-EU stand is testament to the blinding effects of anti-communism. Of course, he could not possibly write two entire essays about a "[Greek] Left Response" without mentioning the KKE at all, so he makes two cheap shots at the Greek Communists.

First, he writes that "Contrary to the position held by …the Communist Party, that today there is no point in talking about revolutionary changes …[because] the situation [is] not ripe enough", and then he himself goes on to admit a few lines later that "Of course, the situation is in a way unripe and immature"!

In any case, this is a complete distortion of the KKE’s position, which makes clear in all of its agitation and propaganda that ‘socialism is on the agenda today’, ‘there is no alternative to austerity but socialism’, etc., etc.

It’s certainly true that the KKE has said that "no revolutionary situation exists today in Greece", but that, after all, is a completely objective and unassailable fact.

Second, he accuses the KKE of a "destructive and sectarian criticism" of SYRIZA. And yet Sotiris implicitly agrees (whether he is prepared to admit it publicly or not) with the KKE’s view that SYRIZA’s pro-Euro position is dangerously misleading the Greek working class at a crucial moment in the fightback against the deepening crisis.

Is SYRIZA not deserving of such a damning "criticism"? 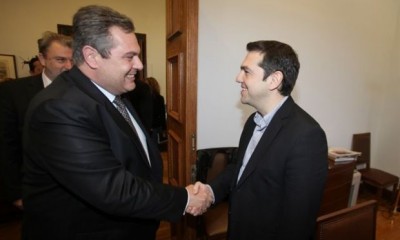 The Crisis of the CPUSA Part 2