Pittsburgh activists Greg Godels and Tayfun Gol interviewed Brian Becker of the ANSWER Coalition on its plans for the first major anti-Trump demonstration in Washington DC.

The ANSWER Coalition was formed on September 14, 2001 in the aftermath of the September 11, 2001 terrorist attack. The acronym stands for Act Now to Stop War & End Racism. ANSWER called a demonstration on September 29, 2001 in Washington DC under that banner — opposition to war abroad and racism at home. When 25,000 people attended the September 29 protest it came as a great shock to many given the very difficult political climate at the time.

The ANSWER Coalition organized the first mass actions against the pending Iraq invasion attended by hundreds of thousands of people in 2002 and 2003 and has since that time organized many national and local mass action mobilizations in opposition to imperialist war in the Middle East, in support of the Palestinian people, in opposition to the US blockade of Cuba and the sheltering of anti-Cuba terrorists, in support of the Cuban 5, in defense of immigrant workers and as part of the movement against the epidemic of racist police violence in the United States.

2. What are the chief demands of this action?

The ANSWER Coalition is operating from the perspective that the Trump government is preparing to carry out a frontal assault against the working class. This means it  will attempt to carry out a large-scale privatization program directed at transforming public property into private property under the ownership of Wall Street, corporate America, private equity firms and hedge funds. At the same time it will lift, or try to lift, environmental and labor protections  considered to be an obstacle to the maximizing of profit for the capitalist class. Dramatically lowering the tax rate on the rich and corporate America will be another method for the transfer of wealth from the bottom to the top.

The Trump Agenda attempts to inaugurate an era of unrestrained capitalism. Also targeted will be public education, social security, Medicare and other vital social programs. The Trump Agenda also includes the massive expansion of the U.S. military and military budget. The incoming Trump administration has announced its intention to move the U.S. embassy in Israel to Jerusalem – an extreme provocation against the Palestinian people. Already it has expressed its belligerence towards China, and Trump has filled top foreign policy and military positions in his cabinet with anti-Iran extremists. The Democratic Party leadership in Congress will not stop Trump in the implementation of this extremist, right-wing capitalist agenda. In fact, they paved the way for this agenda.

The only force capable of stopping the implementation of the Trump Agenda is the building of a massive, grassroots movement that creates a new political atmosphere by virtue of engaging in militant and sustained protest in all areas. This movement will reject the war-mongering campaign against Russia and the imperialist foreign policy orientation that persists under both Democratic and Republican presidents.

The purpose of the January 20th demonstration is to bring this perspective into reality. In other words, to make this concept begin to live in practice. While the so-called liberal establishment engages in hand-wringing over the Trump Administration, our perspective is to build a militant, workingclass- based movement that can actually make a difference in terms of affecting the political atmosphere in the United States.

3. How can people participate in this protest?

The ANSWER Coalition is working in cooperation with Pacifica Radio Network for this rally, which will include speakers and cultural performances from a broad cross section of the United States. We will also be gathering at 14th and Pennsylvania Avenue on the west side of Freedom Plaza and in 14th Street NW adjacent to Pennsylvania Avenue. Both areas, the Navy Memorial Plaza and Freedom Plaza, are permitted protest areas. We secured the permits after a year-long struggle that included both public pressure and litigation. The permits are important because it allows people to know that there is an area that they can come and stand up and express their opinion right on the parade route.

We think this is critically important because Donald Trump has done everything possible to “sanitize” the Inaugural Parade route with just his supporters and donors in an effort to create a false impression that he has some kind of mandate. Because the demonstration areas are within a secured zone set up for the Inauguration it means that people have to enter the area through checkpoints that will be located up and down Pennsylvania Avenue. In order to guarantee that you can make it to the demonstration area, we are urging people to arrive early and advertising that people should try to come by 7:00 a.m. if possible.

The demonstration will go until Trump passes our spot on the Inaugural Parade route, probably around 2:00 p.m. In order to find out transportation from your local area to come to the Washington, D.C. rally on January 20th, go to the ANSWER Coalition website – <<answercoalition.org>>.

4. What does the ANSWER Coalition see as the next steps for the anti-racist, anti-imperialist movement?

By January 20th, we will be announcing an action plan to carry out sustained actions in opposition to the Trump regime’s plans for the looting of public and social property by Wall Street. The foundation for any action plan must be the continued mobilization of the working class, the poor and young people. 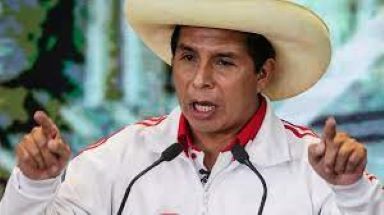 Astounding Victory in Peru of Socialist Candidate for President