Gerald Seib, The Wall Street Journal’s chief political commentator, is right about the attack on the Saudi Arabian oil facilities: “In any case, the timing is deeply suspicious.” But hampered by his ties to officialdom, his suspicions take him only to the Iranians and their allies. Like all those drawing a salary from the monopoly entertainment industry, Seib cannot, by choice or by diktat, color outside the establishment lines.
Of course Seib is not alone in pointing fingers at the Iranians; the entire US foreign policy/intelligence cabal can only see Iran’s hand in the attack. They are determined to gin up enthusiasm for some kind of military adventure against Iran. That unanimity alone is cause to be “deeply suspicious.”
As for timing, what sense does it make for the Iranians to stir up trouble when Trump had just fired John Bolton, the most violently anti-Iranian policy maker in his administration, when Trump had alluded to a possible deal with Iran and dangled $15 billion bait before the Iranian leadership? Little sense indeed– and “deeply suspicious timing.”
While liberals will choke before applauding any of Trump’s foreign policy initiatives, his bizarre confidence in “deal-making” has pulled the US back from more than one bloodletting venture planned by the policy hawks and the generals. Certainly the attack on Saudi Arabia played into the hands of the belligerent factions that stood with Bolton (and Pompeo) on the road to war. They benefit from the attack.
With a close election and a history of crying “Iran is evil!” at every opportunity, Israeli Prime Minister Netanyahu would have sought to benefit from the attack.
And the US domestic oil industry– now the largest producer in the world– definitely benefits from the attack. Violence and instability in the Middle East, the traditional oil spigot, only makes the US a more attractive source, as Trump has bluntly advertised. With the Strait of Hormuz a risky bottleneck and Saudi Arabian facilities ablaze, cautious customers might be well advised to buy US energy resources guaranteed by a trillion-dollar military.
At the same time, energy insiders have exposed the explosive crisis facing the fracking-driven US oil industry. Caught in the scissors of massive overproduction and collapsing earnings, the industry is facing a cold, calculating Wall Street, calling in the enormous debt accumulated over the years. Wall Street financing allowed the industry to survive the 2014 Saudi Arabian attack on the US shale revolution, but now finance capital wants to see a return. The unprecedented rise in oil prices in the aftermath of the attack certainly helps the US industry, as a back page article in The Wall Street Journal concedes: “Frackers Seek to Profit on Saudi Oil Attack” (9-17-19).
For over two years, I have been arguing that US imperialism is shaped more and more by the explosive growth of US energy production. New and greater markets for oil and liquified natural gas play a larger role in shaping US foreign policy. Rather than using US might to dominate and safeguard energy production, US foreign conduct is today directed toward disrupting competing sources. The chaos in the Middle East (and the intervention in Venezuela) certainly further that agenda.
Apparently, the Russians stand to benefit as well. President Putin suggests that maybe Saudi Arabia, with the third largest defense budget in the world, should spend some money on Russian air-defense systems like their touted S-400. Clearly, the Saudi defense system, based on the most sophisticated and costly US defense systems, failed to stop the attack, a great embarrassment to the US and the Saudis.
US officials, including the Joint Chiefs of Staff, scrambled to explain the failure. They argued that the multi-billion-dollar systems were focused on threats from the Houthis in Yemen. Of course that claim contradicts the long-standing, fundamental charge that Iran is the principal danger to the region. To deflect attention from the defense failure, the US and the Saudis must instead maintain that they were bushwhacked by the Iranians. Any alternative explanation would point to an enormous intelligence and military-hardware failure. Surely the poor, backward Houthis could not outsmart the best and brightest of the Western defense establishment. The illusion must be maintained.
Liberals, and even many on the left, have failed to grasp the current imperialist paradigm. We witness the clash and competition of big and little imperialist powers. The Cold War paradigm is now obsolete. And in its place are postures, maneuvers, and actions by many rivals to gain advantage over or escape the dominance of others; we live in an era of escalating inter-imperialist conflict between capitalist countries of every size and political persuasion.
We have to go back over a hundred years to find a real, existing parallel to the events transpiring on and around the Arabian peninsula.
Like the events in Sarajevo in 1914, we may never clearly identify a “villain.” Nor will it really matter. It may soon be overshadowed by the war and destruction that comes in its wake.
Greg Godels
zzsblogml@gmail.com 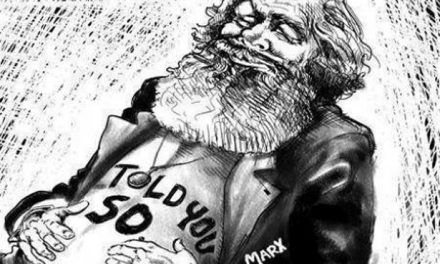