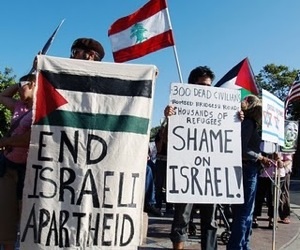 The facts are undeniable. In response to Israel’s brutal treatment of Palestinians fighting to prevent evictions from their homes in East Jerusalem, Hamas, a spin-off from the Muslim Brotherhood, began firing short-range missiles manufactured from scrap metal into Israel. Within a few days, powerful American-made missile launchers, guided by the most sophisticated technology, began bombarding the Gaza Strip.

This latest violent outbreak was precipitated on April 17 by the imminent eviction of six Palestinian families from their homes in East Jerusalem, the site of Palestine’s capital in its state-to-be. These dwellings are close to the Al-Aqsa Mosque and the Dome of the Rock, both located on a site of great importance to the three Abrahamic religions. The significance of their location and the threatened evictions during the final days of Ramadan ignited outrage. This emotion was further stoked when Israeli forces stormed the Al-Aqsa Mosque during prayers and fired stun grenades, rubber bullets and tear gas at the assembled celebrants. The projectiles landed in the prayer rooms of the glorious holy place, thereby endangering the lives of the many elderly men gathered there to pray.

A searing feature of the initial outbreaks was the Israeli police and members of the Israeli armed forces’ widespread manhandling of Palestinian children and young teenagers, who are seen being pulled by their garments and corralled by soldiers in full riot gear. The children’s faces show a remarkable range of emotions, including terror, defiance, bewilderment and hatred. This same set of emotions has welled up on the faces of adults throughout the entire world. Hundreds of photographs document this outrage.

As awful as Israel’s depredations against the men, women and children of East Jerusalem were, its massive attacks on Gaza led voices throughout the world to cry out, “Stop Israel’s War Crimes!” The horrific hostilities, that raged from 1948 to 1949, which Israelis call the War for Independence and Palestinians call al-Nakba (“the Catastrophe”), had caused over 700,000 Arabs to flee in every direction. The largest contingent of Palestinian refugees settled in Gaza, which was under the protection of Egypt until Israel seized it during the Six-Day War in 1967.

Gaza has evolved into what many now call the world’s largest open-air concentration camp. Its 2.05 million inhabitants subsist in 141 square miles, much of which has been made off-limits by Israeli decree. The Palestinians of Gaza are trapped, cheek by jowl, in a place with no economy, no arable land, no right to fish in the Mediterranean Sea and no exit.

Israel’s 11-day bombing of Gaza from May 9 to May 20 accounted for almost all of the casualties: 12 Israelis and 240 Palestinians, including 63 children, were killed. These disproportionate outcomes speak to the David- and-Goliath nature of this struggle. While damage to Israeli structures and infrastructure was minimal, Gaza has been devastated. Seventy thousand of its residents have become refugees. American-made bombs have destroyed many schools and seven medical facilities. Throughout much of Gaza, sewage systems have been wrecked, safe water has become unobtainable and electricity is shut off. What cannot be calculated is the tremendous damage to the psyches of Gaza’s population, especially its children. Based on what we know from Israel’s four previous incursions, Israel will likely place innumerable obstacles in the way of Gaza’s reconstruction.

How did Israel, which at its birth announced its intention to become “a light to all nations,” become an apartheid state? The answer can be found in its earliest origins. Theodore Herzl (1860–1904), an Austrian intellectual, laid out a “solution” to “The Jewish Question.” He posited that Jews had no future as a diaspora whose fate would be either persecution or assimilation. He insisted they must have their own country. In 1896, he laid out the formula in The Jewish State, a short book that advocated the ingathering of the Jewish people where upon arrival they become citizens. Once set in motion, the rejection of the viability of the diaspora and the “right of return” were the concepts that began to create an apartheid state.

In July 2018, the Israeli parliament carried forward Herzl’s vision when it adopted a new nation-state law stating, “The right to exercise national self-determination is unique to the Jewish people.” It also proclaimed Hebrew as the state language while Arabic was demoted from an “official language” to a “language with a special status,” whatever that means. The curricula of the Arab schools, whose budgets are woefully underfunded, are controlled by the state.

Palestinians cannot escape their inferior-caste status even through marriage to Jews. In Israel, there is no civil marriage, and conversions, which must be adjudicated by ultra-orthodox rabbis, are unheard of. Everything in Israel is organized around the principle of “separate but unequal,” which consigns Palestinians, who comprise 20% of Israel’s population, to the hardest, dirtiest, lowest-paying, and least secure occupations. Include the Occupied Territories that Israel rules over, and Palestinians are roughly 50% of the total population of Palestine/Israel.

Palestinians, including their children, know that Israeli government agencies and individual citizens, with the acquiescence of the United States, have everywhere been steadily encroaching on land intended for the basis of building the state of Palestine, whose capital would be East Jerusalem. The Israelis have confiscated land on the West Bank to construct housing for 400,000 Jewish Israelis. In addition, the Security Wall (referred to as the Apartheid Wall by critics) encroaches on huge amounts of Palestinian land, cutting straight through villages and, in one case, through a school playground. Most recently, Israeli individuals and agencies have been purchasing land and houses in Israel’s few remaining integrated urban centers. Earlier, Israel formally annexed from Syria the Golan Heights, which contains the headwaters of the Jordan River.

The Jewish Agency holds much of Israel’s land, “in perpetuity for Jewish people.” The largest swaths of land (and whatever structures existed on these lands) were confiscated from Palestinians who fled the ethnic cleansing perpetrated by Zionist militias during the 1947–1948 war. U.N. Resolution 194, which was passed in December 1948 (and subsequent resolutions) upheld two principles: the right of Palestinian refugees to return to their houses and land or to be fairly compensated. These resolutions have been blocked by Israeli obfuscation. Recently, the Israeli government has started seizing undeeded land in the West Bank, where much of the land has been held since time immemorial by extended families whose ancestors possessed them based on the pre-capitalist principle of usufruct. Israel’s encroachment on the land, which as I write and you read these words, is effectively shredding the possibility of a two-state solution, the supposed goal of decades of U.S.-backed “peace talks.”

This conflict is driven by the Palestinians’ belief in their right to return to what was taken from them; and the Jewish people’s Biblically inspired claim to a right to return under all circumstances and partake of full citizenship by putting one foot on Israeli soil — which is the basic tenet of Zionism. Consequently, what was intended to be a Palestinian state is becoming strings of barely contiguous bantustans. The Palestinians can’t and won’t stop fighting. More and more people have evidenced their willingness to help them achieve some measure of justice.

Gerald Meyer is professor emeritus of history at CUNY-Hostos Community College and the author of Vito Marcantonio: Radical Politician and co-editor of The Lost World of Italian American Radicalism. Raised Roman Catholic, he discovered as a teenager that his grandmother was Jewish. This realization and his adoption of socialism led him to enlist in a six-month kibbutz-based, work-study program. He now believes in the establishment of a single secular democratic state for all the people of Israel and Palestine.

This article originally appeared in The Indypendent.