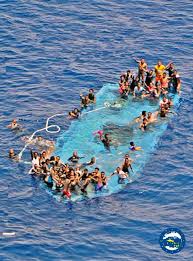 The General Secretary of the KKE (Communist Party  of Greece), Dimitris Koutsoumpas, during the meeting of the political leaders called by the President of the Republic on the refugee question last Friday submitted a paper with the full and elaborated positions of the party on the specific issue.

1.The KKE, from the very first moment of the sharpening of the refugee-immigration issue, attempted to explain its causes to the Greek people, which are the wars and interventions unleashed by the USA, NATO and the EU in the wider region of the Middle East, the Eastern Mediterranean, North Africa, in the framework of their competition with other forces, like Russia.

2. Needless to say the people who are victims of wars, interventions and reactionary regimes have the right to seek a safer life in other countries, despite the fact that a permanent solution to the problem can be found if the people of each country organize and struggle to overthrow the system that creates wars, poverty and refugees.

3. The situation has been exacerbated in the recent period, due to the confrontation between Russia and Turkey, the development of Turkey’s military activity in Northern Syria, as well as the direct involvement of NATO in the Aegean Sea, which was decided at the recent summit of NATO defense ministers, after the request of the Greek government as well. This involvement is using the refugee issue as a pretext, but in essence is related to the antagonisms and escalation of the war in Syria, while it prepares new possible interventions in other countries in the region. This development will sharpen the problem of the refugee flows. At the same time, this development has encouraged aggressiveness and provocativeness on the part of Turkey, as was apparent from its actions in recent days, which dispute Greece’s sovereign rights in the Aegean Sea, utilizing the well-known position of NATO that the Aegean is a single operational area, a fact that opens up the issue of abolishing Greece’s sea borders.

4. The Greek government must immediately withdraw its agreement to the involvement of a NATO naval force in the Aegean. It must provide no assistance, no infrastructures or bases; it must not allow the use of its land and maritime territories and airspace for the preparation or carrying out of imperialist interventions and wars. In addition, it must withdraw its support for the EU decisions, which together with the Schengen Agreement and the Dublin Regulations, condemn thousands of refugees to being trapped in Greece against their will.

5. The KKE, from the very first moment when the tendency for the exacerbation of the refugee-immigration issue became clear, denounced the political line of the EU on the refugee-immigration question as being the main cause for the entrapment of refugees and immigrants in various countries that are gateways to the EU, including Greece. The decision of the Summit of 23rd of September 2015 created the conditions for us to arrive at today’s suffocating situation of entrapment. This decision, which was saluted by the Greek government as a success, determines the relocation of a small number of refugees, who the capitalist economies of European countries want to absorb, to EU countries, while the vast majority will face repression, refoulement [interference] and entrapment in countries like Greece. The Summit of the 18th of December 2015 “tightened the noose even further” around the refugees and immigrants, with decisions for the strict observance of Schengen, the creation of a European Border and Coast Guard etc. In parallel, it violates the Geneva Convention and does not recognize people coming from countries like Afghanistan as being refugees, despite the fact that they are war zones and under imperialist occupation.

6. The recent decision of the EU Summit on the 19th of February reproduces the same impasses, such as closed borders, fences, forces of repression and teargas, the ceiling and quotas even for refugees. The ground is being prepared for even more permanent and painful solutions. Certain sections from the decision of this summit are characteristic: “the continued and sustained irregular migrant flows along the Western Balkans route remain a grave concern that requires further concerted action and an end to the wave‑through approach and to uncoordinated measures along the route,.. Asylum seekers do not have the right to choose the Member State in which they seek asylum;”These decisions give the “green light” for bans and entrapment and embolden states, like Austria and others, which unacceptably close the borders. While Germany and Sweden reinforce border controls and restrictions as regards the granting of asylum, strengthening the human trafficking networks and fueling fascist organizations.

7. Based on the above and given that there can be no solution to or even alleviation of the problem, as long as the imperialist wars and interventions in the region continue and the specific EU and NATO decisions remain in force, the KKE proposes specific positions to relieve the problem, which however require the annulment of the decisions of the imperialist unions and alliances. The consequences can only be dealt with in this direction.

—Immediate, safe transfer of refugees-immigrants from the first reception countries like Turkey, Jordan, Lebanon, as well as from the Greek islands to their final destination countries, under the responsibility of the UN and EU and with full respect for the rights that flow from their refugee status. Especially as regards the islands, this is a direct answer to those who shed tears about the economy, tourism etc.

—Withdrawal of NATO from the Aegean. NATO’s involvement in the Aegean, apart from the hazards for the country’s sovereign rights and for the greater entanglement of the people in the war plans of the imperialists in Syria and the Eastern Mediterranean, is dangerous, unacceptable and signals the country’s deeper involvement in a more generalized imperialist war. It is in direct breach of the UN Treaties and international law concerning refugees, according to which it is illegal to impede or deter refugees from submitting asylum applications to countries that have accepted and are fully integrated into international refugee law .The refoulement of refugees is also absolutely outlawed.

a) The rights that flow from refugee status and asylum seekers must be recognized for all nationalities that the UN attributes a refugee profile to, which includes the Afghan refugees.

b) The repressive police measures against refugees at the borders with closing of the borders as is happening today in FYROM and other countries must stop.

c) The imposition of ceilings for asylum applications must stop now, which is being carried out according to the rationale of proportional distribution over time, on the basis of the quotas that have been decided on by the EU-a violation in practice of refugee law.

—Generous funding for infrastructure and rescue personnel, especially in the winter months, as well as for reception, medical care and registering, under the exclusive responsibility of the state, without any NGO involvement.

—The creation of decent public temporary reception centres, which will function under the responsibility of the Ministry of Immigration Policy, for as long as the procedures of first reception, medical care, registration and preparation of documents will last, which will allow the safe continuation of the journey for those who want to continue-the overwhelming majority- or the examination of asylum applications for those that choose Greece as their final destination country, which is a relatively small minority.

—Inactive military camps, unused buildings, properties and facilities etc. that belong to the public sector can be used and adapted for the purpose of providing this accommodation, with the satisfaction of the needs of the refugees and all the residents of the area being the basic criterion. The organized transport from the port of Piraeus and Victoria Sq. of thousands of refugees, putting an end to their unacceptable living conditions. Immediate measures, under the responsibility of the state, for the creation of humane conditions for the temporary stay in Idomeni of the thousands of refugees, utilizing all means and possibilities.

—The “Hot Spots”, the relocation centres, the camps of refugees-immigrants are in essence sorting centres, where a very small number will be transferred in an organized way to other EU member-states and the majority will be trapped in Greece, against their will. This has been borne out after the obvious failure of the so-called EU relocation programme of refugees. The 50,000 “temporary”, according to the government, places of shelter, have been proved to be places of permanent entrapment, as the KKE predicted, and of course it will not remain at this number as there is already preparation for more than 100,000 places.

—Abolition of the Dublin Regulations, Schengen, Frontex and all the repressive mechanisms of the EU. No to the new measures of the EU and mechanisms for repression and the disputation of sovereign rights at the borders, like the soon-to-be-established “European Border and Coast Guard”. We are particularly worried that the refugee issue will be used to intensify repression against the peoples of Europe.

—No participation or involvement of Greece in and no provision of its armed forces to the imperialist wars and interventions, which are responsible for thousands of refugees and uprooted people amongst the other many torments they create for the peoples .All the US-NATO military bases in Greece must be closed now.

8. The KKE, with these demands outlined above, addresses itself chiefly to the Greek people, who are facing the grave consequences of the capitalist economic crisis and at the same time are expressing their full and moving solidarity with the refugees in every way. The labour and people’s movement must struggle for immediate measures to relieve and support the refugees, for their transport to the destination countries, against the decisions of the EU. It must strengthen internationalist solidarity, the struggle against imperialist war and the rotten exploitative system that gives rise to it.

9. It follows that the KKE does not consent to the positions of the government in light of the Summit on the 7th of March. It is clear that the decisions of the EU will have a direction that will intensify the causes of the problem and will not deal with the negative consequences for the peoples of the EU and the refugees themselves.”