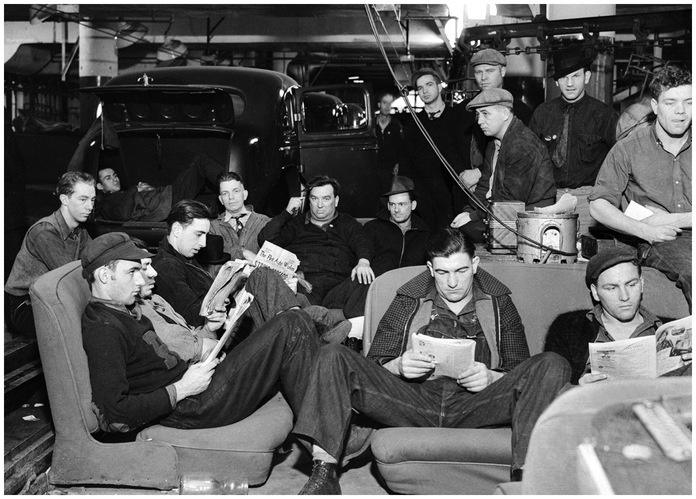 “Nor can I understand how men who aspire to the leadership of labor are able to sacrifice labor’s interests in favor of the Democratic Party. I cannot understand men to whom a visit to the White House is more important than getting the workers out of the dog house.” Wyndham Mortimer

At a time when ex-FBI chief James Comey’s self-serving, self-righteous book becomes a bestseller, in a season when ex-Secretary of State Madeleine Albright, the enthusiastic apologist for genocide against Iraqi children, joins Comey on the bestseller list with a preposterous lecture on fascism, it may well be time to retreat to the library.

I found some solace and much enlightenment from a dusty, cobweb infested paperback in a corner of a basement book self. I had read Organize! some years ago, maybe forty or more years ago. Published posthumously by the author’s daughter and a colleague, the book is a memoir of one of the US working class’s most valuable leaders– Wyndham Mortimer– at one of labor’s most important junctures.

The first time that I read Organize! In the 1970s, I thought it another chapter in the rich legacy of US labor militancy, one of many engaging stories of the militant roots of the then powerful institutional US labor movement.

Reading the book today, I am struck by the foretelling of the labor movement’s decline, the causes of the decline, and its source in misleadership. Light is shown on the devastating effects of anti-Communism and opportunism in the US labor movement. The sad, pathetic state of the labor movement today brings the accomplishments of Mortimer and his comrades into even sharper relief than it did forty years ago.

Who was Wyndham Mortimer?

Wyndham Mortimer was the son of an expatriate English/Welsh family that settled in Central Pennsylvania coal country. Like many coal-patch youth, Mortimer went to work in the mines at age twelve. He later worked in a steel mill, on the railroad, as a street car conductor, and finally at the White Motor Company in Cleveland. Throughout his working years, he had both a deep understanding of the exploitation of working people and a burning desire to remove that burden. His experience and study took him from the United Mine Workers, to the Socialist Party, to the Industrial Workers of the World, and finally to the Communist Party, a logical journey that equipped him to lead the fight to win the organization of industrial workers.

He learned from his railroad experience that not all forms of unionism were the same. The Brotherhood of Railway Trainmen (BRT), for example, preached the philosophy of “identity of interest” between workers and capital. He confronted the Grand President of the Brotherhood with the question: “You tell us the interests of the company and us workers are identical. What then is the reason for this union we call the BRT? Why don’t we join the same organization as the [railroad] carriers?”

The same question could be asked today of most AFL-CIO union presidents who advocate class collaboration or labor-management cooperation: Why do you need a union if the capitalists and the workers share common interests?

Mortimer garnered another valuable lesson from the encounter. Grand President Lee shouted back: “You are a socialist!”

“And I found out quite early that any time any organization or any individual spoke up in favor of the working people, they were immediately labeled [socialist or] Communist– even though they might not have known the difference between Communism and rheumatism!”

And the old craft-union AFL was soon recognized to be no friend of the industrial worker, placing every obstacle in front of Mortimer’s organizing efforts in the auto industry. In the summer of 1932, Mortimer and his fellow workers approached the Cleveland Federation of Labor for help in organizing White Motors. CFL executive secretary, Harry McLaughlin dismissed the request: “Why, no one can organize that bunch of hunkies out there.” Unfortunately, this kind of craft-union insularity and elitism still infects too many of the trades.

At the famous 1935 AFL Convention, Mortimer stood by John L. Lewis when he raised the question of industrial-union organization. Apart from the celebrated punch-out of Carpenters’ union president, Bill Hutcheson, Lewis and his allies organized a challenge to the vice-presidency of the reactionary, vocal exponent of “identity of interest,” Matthew Wohl. Though they failed to defeat Wohl, they signaled that class-struggle unionism was on the industrial-union organizing agenda. The Committee of Industrial Organizations (CIO) was born from these encounters.

It should be an embarrassment to present-day trade union functionaries, who have overseen the decline of trade union membership, when Mortimer becomes almost apologetic that workers of his era were so accepting of their fate: “To those who marvel at the docility of a working force that could accept this kind of insanity, let me explain the conditions existing at the time. Unemployment was widespread… Men were kept in a state of fear, workers were fired on the slightest pretext, or for no reason at all… In the absence of a union, some workers became sycophants and stool pigeons… So great was the fear of losing the precious job that men would even work through their lunch periods.” And yet skillful and dedicated leaders were able to overcome these obstacles to build the most powerful, militant movement in the history of US labor.

Today, labor “theorists” and their Democratic Party colleagues decry the backwardness of the workforce, blaming the sorry state of labor on the workers themselves. They fail to correct the growing sentiment that workers are “deplorables”– uneducated, bigoted, and uncultured.

It takes Wyndham Mortimer to remind us that workers, like everyone else, are subjected to the worse prejudices, baseless rumors, and crackpot thinking that popular culture can conjure. Prior to the great organizational drive, “Fisher #1 [General Motors plant] employed about eight thousand workers in 1936. The Black Legion boasted a membership of three thousand in the plant at that time. Its membership was composed exclusively of white, protestant, gentile, native-born individuals. This fascist outfit was another powerful obstacle put in the path of the union… This group did not stop at murder if it served their ends. A number of union organizers had, in past years, been found shot. A bullet would be left on their chests and applications for membership in the union were found scattered about.”

Nevertheless, by the end of the year, the workers at Fisher #1 were at the center of what was one of the most militant labor actions in US history, an action that firmly planted the foundation of the United Automobile Workers Union (UAW) and gave impetus to the explosive growth of the CIO– the General Motors sit-down strike.

And Wyndham Mortimer, along with Robert Travis, were the lead organizers of that action. In the words of Mortimer’s colleague, Leo Fenster, “Nothing that the UAW had done before, nothing that it has done since, had that kind of impact on events. The UAW has since, to a considerable extent, taken care of many of the problems of its members. But it has done so within the routine of the status quo… But this was the one occasion when the status quo was wrenched loose from those who would cling to it, when the establishment was yanked from its moorings, when the sacred, inviolable, indispensable open shop was turned into its opposite– the union shop.”

A former UAW leader and Communist, Fenster did not live long enough to see the UAW’s full retreat from even the “routine of the status quo,” but he correctly understood the dramatic achievements of 1936-37.

For the first time, US workers en masse refused to accept the sanctity of property rights by refusing to leave the plants “owned” by US corporations.

US Workers overcame the differences of race and national origin to empower their class, a victory that led to the CIO becoming the most integrated institution in US society (second only to the Communist Party).

The notion that the boss could fire workers at will was defeated in the first CIO contracts, along with many of the other privileges claimed by management.

Mortimer and other Communists’ success and popularity in building the UAW did not go unnoticed by the more conservative elements of the leadership. The year after the settling of the Flint sit-down strike, the reactionary UAW president (Mortimer was first vice president) attempted to expel the most militant leaders of the union on the ludicrous charge of delivering the union to the Communists. Of course the attempt failed and was repudiated at the next UAW Convention.

Nonetheless, anti-Communism, careerist intrigue, false “leftism,” and Democratic Party influence combined to marginalize Mortimer’s influence and leadership. Like most CIO Communists, his continuing commitment to strengthening the hand of the workers and weakening the power of capital stood in the way of the center-right forces who sought to consolidate personal power and distance themselves from the rank-and-file. Despite his retirement in 1945, Mortimer continued to reflect and write on the labor movement.

You say, “British socialism is not abhorrent to UAW members.” Again, you say, “Most UAW members believe in a future non-Marxist world that includes privately owned corporations, paced by cooperatively owned activities and government-owned authorities– the so-called mixed economy, like Sweden, like Britain, but with the UAW and Roosevelt and Senator Norris [a New Deal icon] added.

Now isn’t that a precious piece of nonsense?

I would remind you that surplus value would be perfectly safe with either Roosevelt or Norris. Their crime, in the eyes of monopoly, was that they saved capitalism from itself….

For my part, I am waiting to see what the [UK] social democratic government will do in the present economic crisis. Will it drop its policy of gradualism, and tackle the emergency on socialist lines? Or will it drop all thought of socialism in order to reassure Wall Street, thereby getting another billion dollars and a breathing spell? My guess is that it will forget the working class. It will seek to transmute the gold of working class militancy into the lead of passivity and subservience [Labour began a retreat and was pushed out of power in 1951].

Social democrats in general show a touching faith in the infallibility of capitalism– a faith not shared by the more shrewd and clear-sighted capitalists themselves.

With dollars spent on lawyers and lobbyists. And today, at the last minute, with text messages, phone calls, and letters begging members to commit to future dues payment!

On May 30, my local paper carried an advertisement sponsored by the AFL-CIO, between ads for a mattress sale and weight loss solutions, appealing for workers to visit the Internet and join a union. An impressive response to a life-or-death challenge!

[The treacherous, anti-Communist union leadership] plan to make the American labor movement the staunch ally of monopoly capitalism in its war against the exploited and poverty stricken peoples of the world. And here at home, their witchhunting, disrupting, and raiding of other unions, is treason to the working class…

They eagerly enlisted in monopoly’s army set out to cripple the unity and solidarity of the world’s working people… and their job is to disrupt, confuse, and, if possible, destroy the labor unions of those countries.

They have scuttled the once powerful CIO. They have assassinated the greatest hope American labor ever had, and have dealt the working men and women of America a cowardly blow from which they will not recover for many a long day.

A blow from which they have yet to recover.

Many thanks to Roger Keeran who encouraged me to write about Wyndham Mortimer. His book The Communist Party and the Auto Workers’ Unions  is a classic on the subject.