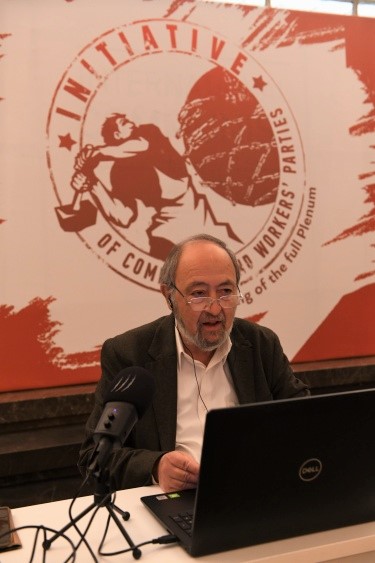 Politbureau member of the Central Committee  of the KKE

On Thursday, 22 of April, 2021, 151 years since the birth of the leader of the October Revolution, the parties of the European Communist Initiative (ECI) held a teleconference dedicated to Lenin and the timeliness of his work, following a decision of the ECI Secretariat.

The introductory speech at the teleconference was made by Giorgos Marinos, member of the PB of the CC of the KKE.

Today’s online event of the European Communist Initiative is dedicated to the 151 years since the birth of the great revolutionary Vladimir Ilyich Lenin and his priceless work.

The leader of the Bolshevik Party is the founder of the Communist Party, the Party of a New Type; the guide of the Great October Socialist Revolution of 1917 that shook the world and of the first years of the socialist construction. He is the protagonist of the founding of the Communist International that gave impetus to the struggle of the CPs and the unified communist strategy.

We honour Lenin, acknowledging our responsibility for the study and mastery of his work,  of our world view in general, of Marxism–Leninism; developing an in-depth understanding that “Without revolutionary theory, there can be no revolutionary movement”.

Equipped with the Leninist principles, we can confront the difficulties of the counter-revolution; we can relentlessly continue the struggle for the overthrow of the deep ideological, political, and organizational crisis of the communist movement, for its revolutionary regroupment.

Capitalism has become rotten. The gap between the potential provided by the development of science and technology and the degree of satisfaction of the popular needs is widening.

This is stressed by the intensification of exploitation, capitalist crises, the new crisis of capital over-accumulation, the unemployment and poverty that the working class and the popular strata  around the world are faced with, coming under the all-out attack of  capital and the bourgeois liberal or social-democratic governments.

The pandemic and the heavy consequences for the peoples, the collapse of the commercialized public health systems, and the millions of dead demonstrate the impasses of the system.

This is highlighted by the military–political plans of the USA, NATO and the EU; the imperialist wars; the competition with Russia and China, in a race for control over the markets, the wealth-producing resources, and the energy pipes, warning us about new, even generalized wars.

The tasks of the CPs are multiplying. It is time to strengthen the critical and self-critical spirit in the examination of the accumulated experience; to study more profoundly the causes of the counter-revolution, the history of the CPs and the communist movement; to draw conclusions in order to monitor the level of revolutionary readiness. This is a prerequisite of our era, the era of transition from capitalism to socialism.

Some Communist Parties managed to lay the foundation of the revolutionary strategy,  facing many difficulties and setbacks. This is an important development.

However, the struggle for the overthrow of capitalism, for workers’ power, for the dictatorship of the proletariat, requires the ideological–political enhancement of the CPs, the generalization of the revolutionary strategy, the establishment of strong ties with the working class and the popular strata, assuming a leading role in the labour movement and carrying out persistent work to win over the consciousness of the workers, to detach forces from bourgeois ideology and opportunism.

It requires robust Communist Parties, with Party Organizations in factories and workplaces, with a guiding capacity, with the development of theory based on the principles of Marxism-Leninism for a systematic study of the developments, of the new phenomena that emerge within the exploitative system.

The objective conditions will define where and when the weak link in the chain will break and the communists need to be well prepared, in order for the subjective factor, the Communist Party, the labour movement and the social alliance to rise to the occasion.

The discourse and struggle within the communist movement about the character of the revolution is of critical importance. In the era of monopolies, of imperialism, the material terms for the new, socialist–communist society have matured, the character of the revolution is objectively socialist; it is not defined by the correlation of forces but from the interests of the working class, which is in the foreground of history, from the main contradiction that must be resolved, i.e.  the contradiction between capital and labour.

The old strategy of the “intermediate transitional stages” has cost the communist movement dearly, it confines the struggle within the framework of capitalism. Power will either belong to the bourgeoisie or the workers, there is no third way and there never will be. The withdrawal from workers’ power, the goal of forming the so-called anti-fascist and anti-neoliberal fronts and anti-monopoly, left, progressive governments means the perpetuation of the exploitative system. This has been shown by the experience in Latin America and internationally.

The policies of cooperation with social-democracy and the support or the participation in social democratic governments of all forms are a major blow to the course of the CPs, to their organizational, political and ideological independence; they lead to the manipulation of the labour movement, they disarm it, they are an element of the crisis of the communist movement.

Lenin’s conflict with the “Provisional Government” following the bourgeois February revolution in 1917, the struggle within the Soviets and the “April Theses” light the way of the constant confrontation with bourgeois and opportunist forces as a condition for the preparation of the socialist revolution.

The struggle within the communist movement is necessary and concerns all the major issues.

There are views that confine the notion of imperialism to the aggressive foreign policy of the USA, that detach policy from the economy.

Lenin, studying the development of capitalism, stressed that imperialism is monopoly capitalism, the last stage of the system, in which the material preconditions are formed,  the necessity of revolutionary overthrow and the construction of the communist mode of production are highlighted.

He proved that the sharpening of the basic contradiction between the social character of production and the capitalist appropriation of its results characterizes all capitalist states, regardless of their position in the international imperialist system. He warned that “Unless the economic roots of this phenomenon are understood and its political and social significance is appreciated, not a step can be taken toward the solution of the practical problem of the communist movement and of the impending social revolution.”

With the tool of Leninist theory, we can analyse the competition expressed at an international level; the character of imperialist unions, such as the EU,  BRICS, etc., at the core of which are the monopolies.

Lenin’s polemic against the opportunist current and its branches, pacifism and social-chauvinism, which collaborated with the bourgeois classes of countries at war during the First World War and led to the bankruptcy of the Second International, is very timely.

War is bred in conditions of “imperialist peace”, it is “a continuation of policy with other, violent means”; it is imperialist on both sides, regardless of which state initiated the military conflict. The struggle must be developed against the root cause of the war, it must be directed to and form the preconditions for the overthrow of bourgeois power.

We defend the first attempt to construct socialism in the 20th century. Its contribution is of historical importance. Exploitation of man by man was abolished. Institutions that secured the participation of workers in the construction of the new society were established.

Despite the weaknesses, mistakes and deviations that led to its overthrow through the vehicle of the opportunist corrosion of the CPs and the counter-revolution, its superiority over capitalist barbarity has been proven in practice by the great popular achievements; the establishment of the right to permanent work and the eradication of unemployment; the advanced free public health system; the educational system and the real education; the equality of women; the achievements in the field of culture and sports. Moreover, by the contribution to the abolition of colonialism; the decisive role in the anti-fascist victory of the peoples and in World War II; by proletarian internationalism, the support and solidarity with the peoples against imperialist aggression.

The socialist revolution and construction are governed by principles and scientific laws.

Workers’ power opens up the way for the socialization of the means of production and the central scientific planning, for the meeting of the contemporary social needs, in a constant effort to develop the communist relations of production.

However, capitalist relations of production have long prevailed in China, under the responsibility of the CP. The economic base is supported by monopolies and big economic business groups; the state operates as a “collective capitalist”. Labour power is a commodity; the working class is being ruthlessly exploited and on this basis already more than 400 billionaires have emerged. Large amounts of capital are being exported to all continents and China plays the leading role in imperialist competition.

The so-called Socialism of the 21st Century is a misnomer, it questions the leading and revolutionary role of the working class, it advocates the continuation of the bourgeois state —which must be crushed— and the perpetuation of capitalist power and ownership.

Socialism–communism has nothing to do with capitalist enterprises, the market, the criterion of profit and the exploitation of man by man that the communists struggle to abolish.

The central scientific planning of the socialized means of production is the basis of the superiority of the new system and has the potential to further develop the productive forces.

There is no room for delay, the counter-revolution is  being continued and therefore the CPs, the communists that believe in socialism–communism must defend the Marxist–Leninist principles of the construction of the new society.

Otherwise, the consequences will be harmful, the integration into the system will be rapidly accelerated, and the crisis in the international communist movement will deepen. The historical responsibilities are heavy.

The KKE has formed a contemporary revolutionary strategy; it studies its history, it is at the forefront of the class struggle but does not become complacent. It insists on the effort to strengthen the militant ties with the working class, the popular sections of the middle-class strata in the cities, of the toiling farmers. It struggles for the Party building in factories, in workplaces, in sectors of strategic importance, for the regroupment of the labour movement and the social alliance, in confrontation with monopolies and capitalism, for its overthrow. The communists in Greece will discuss over these issues at the 21st Congress of the KKE that will take place in June.

We continue along the path set by Lenin and the October Socialist Revolution. This is how we honour the great revolutionary and the heroic history of the communist movement.

An Anti-Monopoly or Anti-Imperialist Strategy?