Both Cuba and Haiti have lived under the thumb of northern nations. The two countries returned wealth to rulers that, once jilted, subjected them to special loathing. CubaÂs offense after 1959 was to have become a socialist and anti-imperialist outpost in the Western Hemisphere. Haiti roused fear and hatred as the worldÂs first and only republic founded on a slave rebellion.

Yet Haiti never overcome threats of a French return in the early 19th century; diplomatic and commercial isolation at the hands of the U.S. slave-holder government; U.S. military domination, directly or through proxies, in the 20th century; and bigÂpower economic exploitation. The Haitian people remain dependent.

By contrast, a rebellious spirit took hold in Cuba after 1868. The revolutionary movement sought social justice and national independence. Newly established independence meant that foreign and domestic plunderers were shown the gate.Â  Only then could projects be undertaken allowing people to survive and live well.

Health care statistics enter into any judgment as to the success or not of CubaÂs social revolution. One recent study, for example, shows that Cuba, dedicated to peopleÂs needs, registers the most favorable public health indicators by far in Latin America and the Caribbean. Haiti is at the bottom.

Looking at the years 2005 Â 2010, the studyÂs Argentinean and Colombian authors utilized 16 measures of health care outcome to compare the health status of populations in 20 countries in the region. They used a graphic device by which the spread between zero and one reflects the gap between the best possible overall outcome and the opposite extreme. Cuba, assigned the number 0.0323 is at the top followed by Argentina with 0.2481. At the bottom end of the scale is Haiti at 0.7063, just below Guatemala with 0.5809.

Outcome indicators used in the study included life expectancy at birth, infant mortality rates, maternal mortality rates, access to drinkable water, public expenditure on health care, and physician Â population ratios. The authors argue that data on Cuba is credible, given sources like the World Bank, World Health Organization, and the Economic Commission for Latin American Countries (CEPAL). They conclude by saying, ÂTo reduce inequalities in health we would have to deal with structural factors exerting much influence on peopleÂs living conditions.Â They refer to Âunjust policies [and] a precarious economic situation.Â Â

The Haitian people, of course, have long struggled merely to survive. Before HaitiÂs January, 2010 earthquake, 55 percent of Haitian adults subsisted on less than $1.25 per day. Three of ten children were chronically malnourished and 40 percent of households were short of food. Unemployment then at 40 percent has now risen to 60 percent. And whatÂs happened following the disastrous earthquake suggests no early end to suffering in Haiti: imperious foreigners descended looking out for their own gain.

The earthquake killed 300,000 people, left one million homeless, and damaged or destroyed 200,000 homes. Over three years later, 400,000 Haitians are still living in tents. Others moved into housing so damaged as, in other circumstances, to require demolition. By August 2012, only 15,000 houses had been repaired and 5,700 replaced. As of December, 2012, only $215 million in international aid had been released for new housing.

Foreign governments were to have donated $10 billion for humanitarian needs and reconstruction. By December, 2012 only $6.04 billion had become available for spending, although much of it was still unspent. (Private donors provided $3 billion.)Â  Of $3.85 billion pledged by the US government, $1.2 billion has not been released for spending. Some $500 million in pledged U.S. funds were spent on U.S. military intervention after the earthquake.

The Center for Global Development (CGD) reported that less than 10 percent of funds donated by governments went to the Haitian government and only 0.6 percent to Haitian NGOÂs and businesses. One third of humanitarian funding was returned to donor countries as reimbursement for involvement in Haiti by their military and civilian agencies. Most of the remaining went to NGOÂs and private contractors. In 2010, the US government awarded more than 1,500 contracts worth $267 million to private corporation, all but 20 of them U.S. firms.

The CGD reports that, ÂDespite extensive efforts, our ability to trace the money is limited by a lack of transparency and accountabilityÂindeed, three years after the quake, much remains unknown.Â  For instance, who exactly got the $1.3 billion Â 36% of the total Â that was disbursed as grants to International NGOs and contractors?Â

Aid money has been spent on restoring infrastructure in and around foreign-owned factories and commercial enterprises. U.S. and other donors supplied $200 million toward completion of a garment-producing industrial park in the northern Caracol region, quite untouched by the earthquake. U. S.-backed President Michel Martelly told foreign investors in late 2012 that his government is Âcreating the conditions necessary for Haiti to become a natural and attractive destination for foreign investment.Â Textile factory owners are looking for public subsidies Âto catalyze investments.ÂÂ  U.S garment makers could observe that, while in 2008 U.S. sewing machine operators were earning $9.50 per hour, Haitian counterparts received only $5.90 per day. Â

In post- earthquake Haiti, money goes for purposes far removed from rescuing masses of desperate people. Yet the Clinton-Bush Haiti Fund steered $2 million in private donations toward building a luxury hotel, one of at least 11 new hotels being built to serve tourists, contractors, and aid workers.

From the point of view of peopleÂs needs, the current Haitian situation is emblematic of how global capitalism works: vultures take out what they can. National sovereignty of the offending nations, chiefly the United States, France, and Canada, is intact. Cuba sovereignty is likewise a fact, yet Cuba put national independence to quite different uses.

Nations dedicated to capitalism use their untrammeled sovereignty – their independence – as license for foreign bullying and wealth extraction. CubaÂs sovereignty, on the other hand, enables its government and people to keep predators at bay, and thereby find resources for improving the lives of all. Indeed, for Karl Marx, exploited classes do require nationhood: ÂSince the proletariat must first of all acquire political supremacy, must rise to become the leading class of the nation, must constitute itself as the nation, it is so far itself national, though not in the bourgeois sense of the word.Â (Communist Manifesto, Part 2) Â

Commenting on that passage in 1971, socialist mathematician Dirk J. Struik noted, ÂThe Manifesto thus sees the struggle of the working class necessarily in its national context, and in this struggle the proletariat comes to a new feeling of national belonging. This is quite different from the nationalism of the bourgeoisie which prepares the basis for the suppression of other peoples.Â (ÂBirth of the Communist Manifesto,Â International Publishers)

So it seems there is the entity of, so to speak, socialist nationalism. In any event, something along that line served to differentiate CubaÂs course from what happened in Haiti.Â  ThereÂs no question, of course, about socialist internationalism, on display now in Haiti, courtesy of Cuba.

Rebeca Grynspan, of Costa Rica, is an Under Secretary General of the United Nations and the Associate Administrator of the United Nations Development Program. Visiting recently in Quito Ecuador, Grynspan commented on the cholera epidemic afflicting Haiti that, attributed to occupying United Nations troops, has since 2010 killed 8000 Haitians and sickened one out of 16. She noted that, Âwithout the Cuban doctors it would have been impossible to make any response to the cholera epidemic in Haiti.Â

She added that, ÂAmong the most hopeful things I saw in Haiti were the Cuban assistance and the appreciation of the [Haitian] people for the Cubans (…) Even before the earthquake, Cuban medical help was in Haiti. One of the incredible things is that many of the Haitians that studied medicine in Cuba became the ÂCuban doctorsÂ involved in practicing medicine in Haiti.Â

Having traveled widely in Haiti after the earthquake, Grynspan emphasized, Âthat there was a new element of the difficult Haitian reality. ItÂs the involvement of Latin America there.ÂÂ  Maybe CubanÂstyle socialist internationalism is taking root in an entire region. 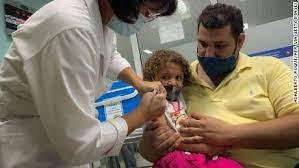 Cuba to Start Vaccinating Kids Under Two Years Old, Way Ahead of the Developed Nations

The Cuban Five: Silencing The Truth Is An Unpardonable Crime